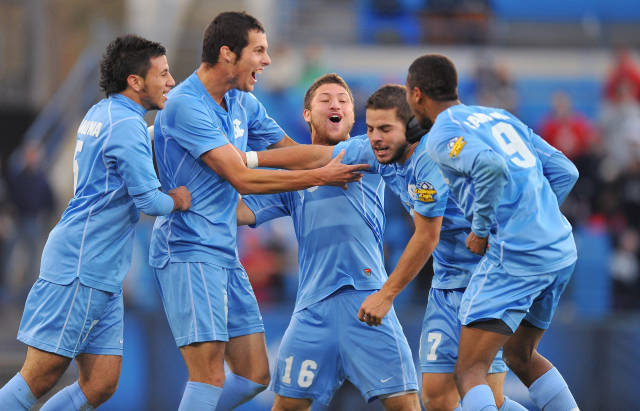 In what his coach called “a moment of inspiration,” junior transfer Ben Speas turned in the goal of the tournament Sunday to provide Carolina with a 1-0 win over UNC-Charlotte in the 65th minute of the national title game in men’s soccer.

The Tar Heel defense stepped up in the final minutes to protect UNC’s second championship, 10 years after the first.

Speas, who transferred from Akron after playing on its national championship team last year, gathered a free ball in the middle of the field and attacked a retreating 49er defense. After making a run at the right corner of the box, Speas reversed course and dribbled the ball to his left before unleashing a left-footed shot over the UNC-Charlotte goalkeeper Klay Davis. The ball dipped over Davis and below the cross bar.

It capped a College Cup weekend in Hoover, Ala., in which the Heels overcame UCLA in a 3-1 shootout Friday after the teams had played to a 2-2 tie after 110 minutes.

The Tar Heels struggled to control possession early on in the title game as UNC-Charlotte controlled the tempo. The 49ers had four shots in the opening 17 minutes of play, but the Tar Heel backline made sure that none reached goalkeeper Scott Goodwin. Center backs Boyd Okwuonu and Matt Hedges combined to block three of the early opportunities.

“For us to be able to play two teams of the caliber of UCLA and Charlotte with such completely different styles and have to respond to both different circumstances and still find ways to get the results — I can’t say enough about our group,” said first-year Coach Carlos Somoamo. “I’m speechless. I’m just so proud of them.

“We relied on our heart and our guts to win this game. Friday night, I think, was a game that extended us beyond what I could have possibly expected. The standard and pace of that game took so much out of us. We just literally didn’t have the legs to play the game that we wanted. I think it’s the first time all year we weren’t able to dominate the ball. But we always thought we could find a way to win the game because we’ve done that all year long.”

The Tar Heels are the first ACC team since Virginia in 1995 to win the ACC regular season and tournament titles and the NCAA title. Carolina finished with a 21-2-3 mark, which equals the school record for wins with the 2001 team. It lost only to Virginia Tech and Davidson.

The lone goal was Speas’ third of the tournament and earned him most valuable offensive player honors.

After Speas’ goal the Tar Heels held off three final shots from the 49ers. Carolina was outshot for just the second time all season.

“There was something extra about this team,” Urso said. “We were a family. Our group understood that we built something special off the field.”