With some 2,500 on-campus students vaccinated against the coronavirus by mid-April, the University is moving toward something close to a pre-pandemic normal by this fall. Plans call for most staff to have returned to the... 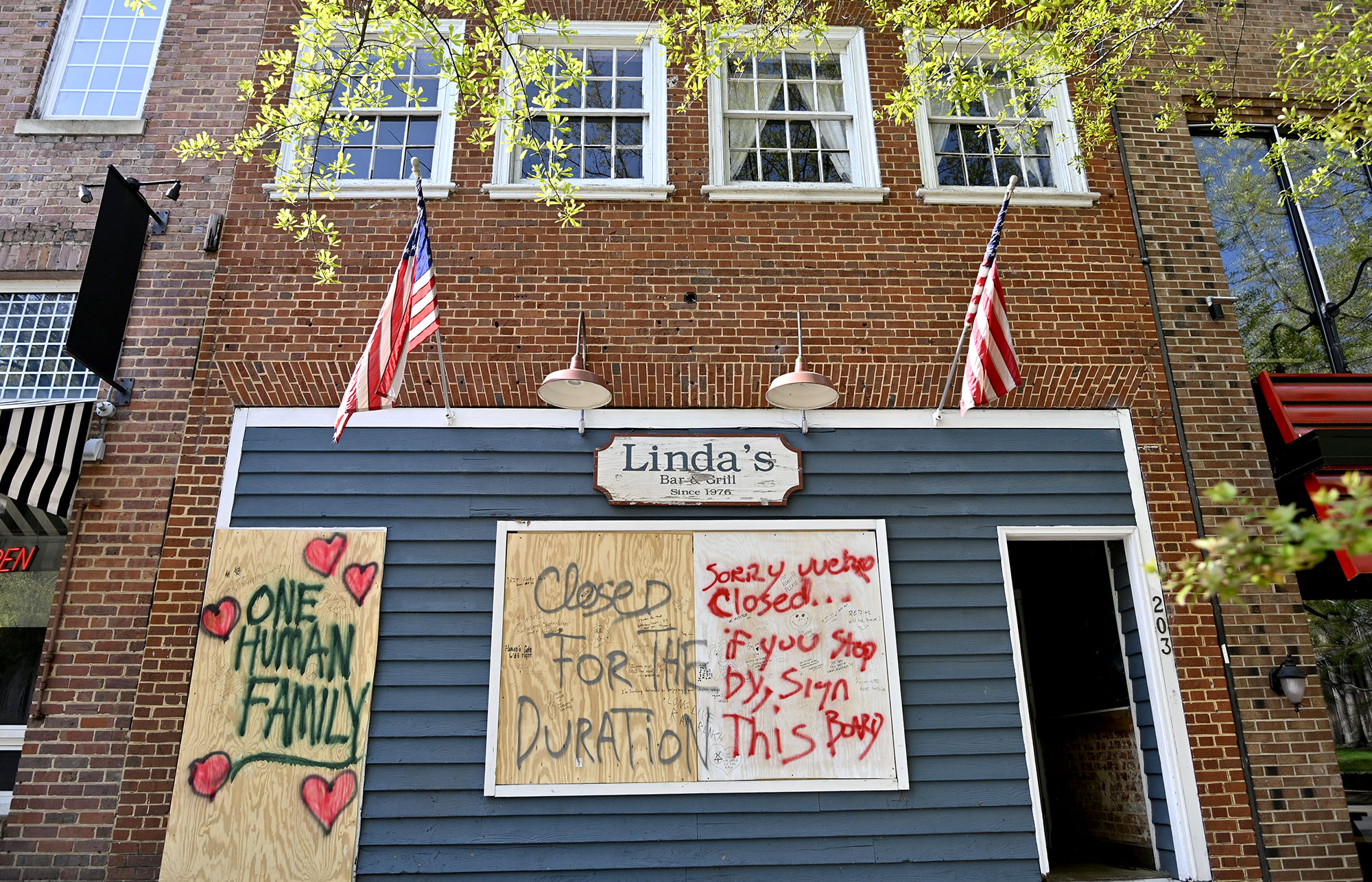 “Closed for the duration” was spray-painted on the sheets of wood boarding up the front windows of Linda’s Bar & Grill. (Grant Halverson ’93)

Shawn Stokes opened the new Carrboro branch of Luna Rotisserie at 11 on a Saturday morning in mid-February. He strung a banner out front of what for years had been home to the Milltown restaurant. He had pushed out some posts on the Facebook page he’d started in 2015, when he opened the original Luna in Durham, and let the news spread via social media.

By 11:05, about 50 customers had swarmed in and sat down at the polished-wood tables, ordering brunch.

A month later, Gov. Roy Cooper ’79 (’82 JD) ordered a halt to all sit-down dining, and Luna, along with every other eatery in the state, was limited to take-out and delivery business only, aimed at protecting North Carolinians from the spread of the COVID-19 virus.

“Everything happened so fast, we just didn’t know what to expect,” Stokes said. “One Sunday, we’re on a wait 10 minutes after we open our doors, and the next Sunday we had five tables come all day.”

When Stokes opened the original Luna, he instituted a policy of paying a living wage and offering health benefits to employees and paid sick leave to the kitchen staff, unusual in the restaurant industry, especially for small, independent operations. “We don’t put the well-being of the chicken above the people cooking and serving it,” Stokes said. 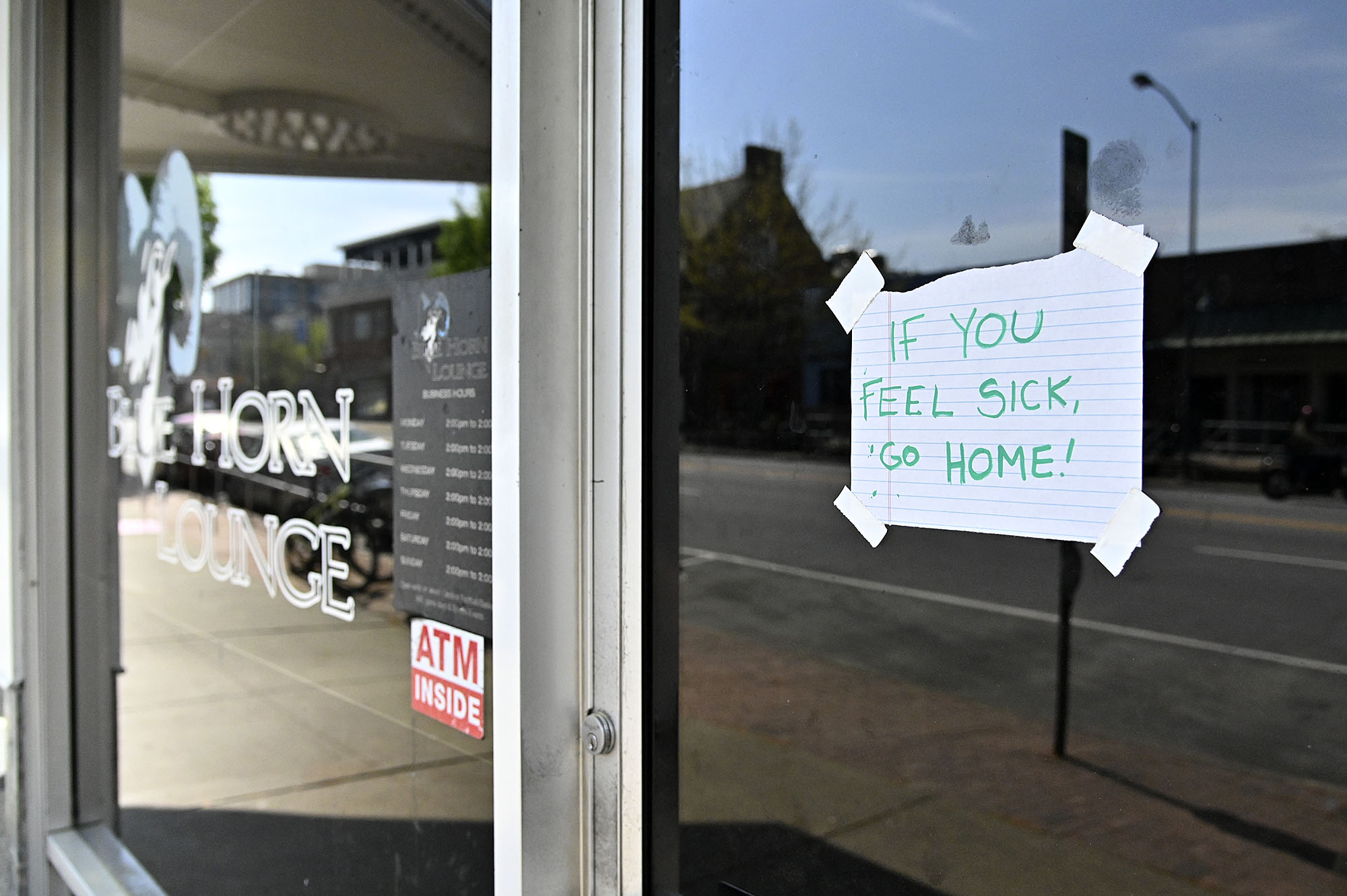 The COVID-19 restrictions had forced him to lay off many on his staff until a Carrboro entrepreneur organized local restaurants into CarrboroUnited, a centralized takeout service that community members rallied around. The success of that endeavor, along with the governor’s promise to cut red tape from unemployment claims, enabled Stokes to rehire core staff. He also sends a family meal home with staff when they request it.

Social distancing at first had restaurants rearranging eating spaces to keep diners at least 6 feet apart and promoting their stepped-up cleaning efforts, such as sanitizing menus after each use. When the restrictions evolved into stay-at-home orders — and the University closed its campus and shifted to remote teaching and working — regular foot traffic evaporated, and they were faced with trying to get by with only takeout and delivery orders.

For example, the number of meals served daily at Moe’s Southwest Grill on West Franklin Street plummeted from 200 to 20, forcing franchise owner Jennifer Wade to reduce staff from 30 to six. She offered free kids’ meals with each order to stimulate business.

Shutting down, stepping up

Some businesses took the ultimate step — “closed for the duration” was spray-painted on the sheets of wood boarding up the front windows of Linda’s Bar & Grill.

University Place gated its interior, but essential businesses — including food services — with an exterior entrance to the mall were allowed to remain open.

Hawkers Asian Street Fare got word on dining-room closures its second day in business at the mall. Jeff Hatsady, area director for Hawkers, took to social media to get word out that it was open for takeout or delivery by DoorDash and that workers from some of the hardest hit sectors — such as hospitality industry workers and teachers as well as first-responders and other medical personnel on the frontlines battling the pandemic — would pay half price. 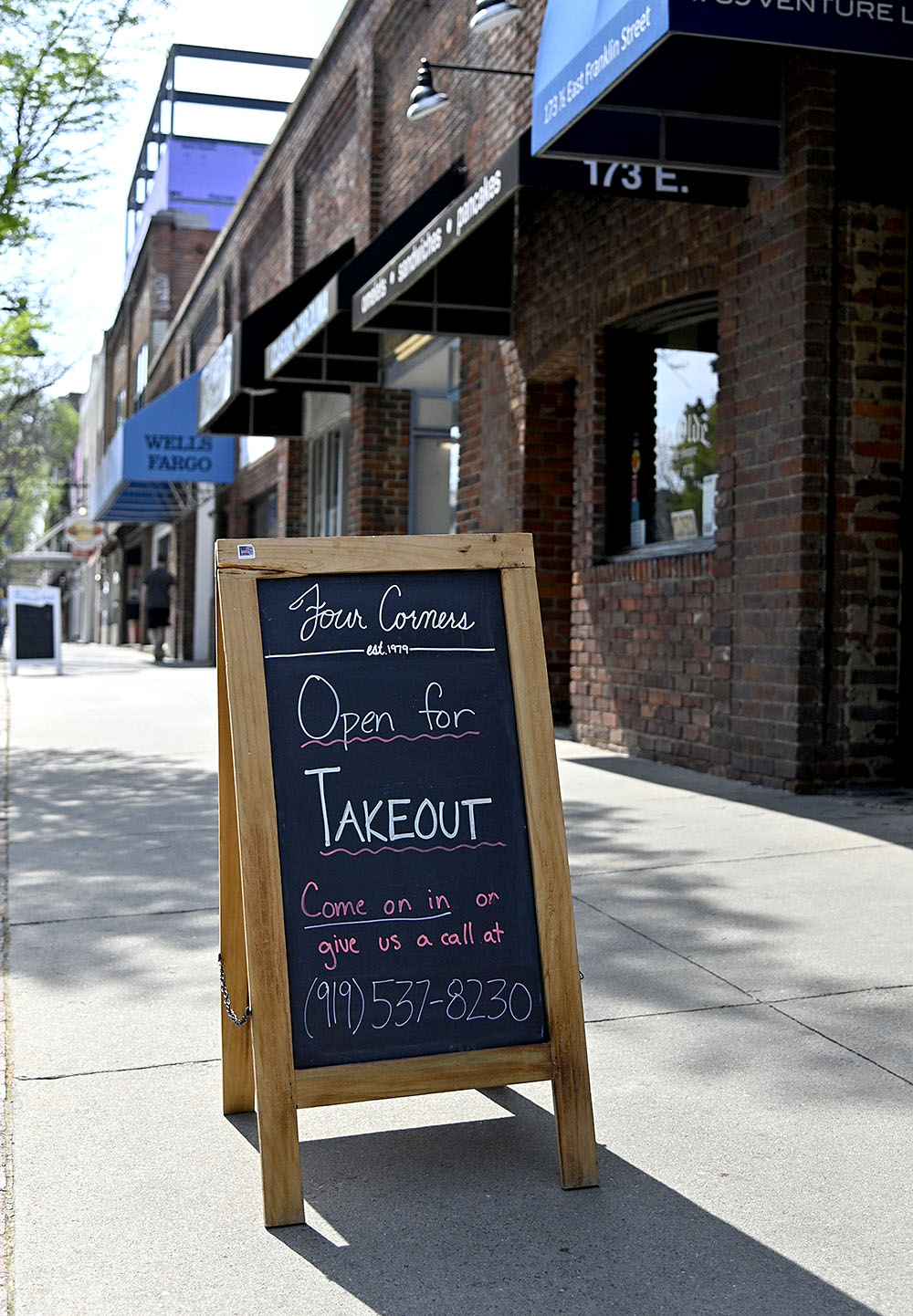 Franklin Street restaurants were faced with trying to get by with only takeout and delivery orders. (Grant Halverson ’93)

Others pivoted to new enterprises.

Instead of brewing alcohol for its liquors, TOPO Organic Distillery on West Franklin Street started producing World Health Organization-approved hand sanitizer from its high-end ingredients and donating it to first-responders and medical facilities. “Locally sourced, organic, hand-crafted sanitizer isn’t cheap,” the distillery posted on Facebook when customers asked how they could help. “Buy TOPO liquor and beer on our website for curbside pickup.”

Venable Bistro in Carr Mill Mall, in addition to its carry-out food service, offered to order products such as steak, cold cuts and toilet paper from its suppliers to sell to its customers.

Carrboro’s Napoli Pizza grew out of a food truck, and it already had a truck with a wood-fired pizza oven parked next door to cook the pizzas for the sit-down restaurant. When the takeout-only order came down, Napoli added cook-at-home options so customers could safely prepare its food on high heat in their own ovens. The food comes par-cooked with pre-proportioned finishing items. Wood-fired pizzas are vacuum-sealed and frozen. Pints of gelato are ready to eat. So that staff do not have to handle credit cards or cash, customers order online or pay over the phone.

Acme Food & Beverage Co. in Carrboro and former Fleet Feet CEO Tom Raynor organized CarrboroUnited Local Food Hub to help independent businesses stay open and pay their employees. Within four days, the group had a consortium of local restaurants that pay a living wage and local farmers ready to source meals. Customers began to place orders on the CarrboroUnited website for heat-and-serve meals, ready-to-cook meat or a box of local produce. Three afternoons a week, they can pick up what they ordered from a trailer-truck parked in the lot in front of Cat’s Cradle on East Main Street.

Orders for more than 1,000 meals came in the first day and increased by another 1,000 daily for the first few days. Carrboro town government reapportioned $500,000 for an emergency impact loan fund, to which Raynor personally contributed an additional $150,000. He also committed $600,000 toward payroll for the CarrboroUnited operation.

By month’s end, CarrboroUnited had 21 employees and planned to move into a vacant space at 300 E. Main St., and restaurants and affiliated businesses had rehired 67 former employees.

Restaurants weren’t the only businesses having to adjust quickly. With the agility of those secondary fastbreaks Carolina basketball fans know well, Johnny T-shirt closed its retail shop on East Franklin Street and shifted all of its business supplying Tar Heel-themed clothing and other wares to its long-established online marketplace.

Epilogue Books Chocolate Brews — which opened across the street just last fall selling coffee, chocolate, pastries, beer and books — kickstarted an online operation. Ambience matters in a beverage-and-books store, rendering the business less conducive to takeout. So owners Jaime and Miranda Sanchez came up with the idea of the “surprise box.” Patrons order a box online at a price that fits their budgets, and the Sanchezes pack it with books and items from local vendors of chocolate, coffee, tea, candles, ceramics and more.

“We’re not alone in our struggle,” Jaime Sanchez said.

The couple launched its online-only service even before the governor closed dining rooms. “We did it for the well-being of our employees and our patrons in the community,” Miranda Sanchez said.

When the state ordered nonessential businesses closed, movie house screens went dark. The Lumina in Southern Village was using the down time to renovate its lobby. The Chelsea Theater in Timberlyne Shopping Center launched virtual screenings, reasoning that if customers couldn’t go to the movies, the movies would come to them. Customers buy a “ticket” that enables them to view the movie online as often as they like for a certain number of days.

While Luna Rotisserie at least had gotten off to a running start before the stay-at-home order came, and food services have been categorized as essential and can stay open, those declared nonessential are navigating uncharted economic situations.

L.A. Bikini had scheduled the grand opening of its Chapel Hill franchise on South Elliott Road for March 30. Now the hair-removal salon is in a holding pattern until the state lifts the ban on spas, gyms and salons. Owner David Holzworth ’10 said that because he had yet to process a payroll, his business was not eligible for relief from the federal government’s recently enacted programs, but he still must pay rent while in limbo.

In a college town, Mother’s Day and Commencement are opportunities to make a little cushion to carry businesses over through the slow summer months, said Matt Gladdek, executive director of Chapel Hill’s Downtown Partnership.

With UNC’s Commencement postponed and uncertainty about when the social and business restrictions will be lifted, will the $2 trillion federal package expanding unemployment benefits and offering loans and financial assistance for small businesses be enough?

“We’re optimistic,” Stokes said. “What we see in writing looks great. How it’s executed is yet to be seen. What we do know is without this relief, very few independent restaurants will be able to survive 2020.”