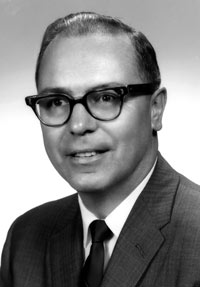 Paul F. Sharp, who served as Carolina’s chancellor for 17 months in the mid-1960s, died Feb. 19 at his home in Norman, Okla. He was 91. His brief chancellorship included work to repeal Speaker Ban Law.

Sharp followed Bill Aycock ’37 in the campus’s top office after Aycock, who had served since 1957, decided in spring 1964 to resume teaching law. Sharp, president of Hiram College in Ohio, was described by then-UNC System President Bill Friday ’48 as a “brilliant, dedicated and successful educator.”

A native of Missouri, Sharp had done his undergraduate work at Phillips University in Oklahoma followed by graduate work in history at the University of Minnesota, where he earned his doctorate in 1947. With a record as an author and scholar, Sharp was confirmed unanimously by the UNC Board of Trustees as Carolina’s third chancellor.

Sharp once was described by an interviewer as “a fellow who can yell with the best of them at a college football game and get as excited as a freshman. He has a wide grin and a twinkle in his eye. He likes American humor of the grass-roots, cracker-barrel variety, and is saddened by the demise of humor in America and the fact that there is no Mark Twain among us today.”

As Sharp assumed his duties in fall 1964, the UNC campus was seething with the continuing controversy over the Speaker Ban Law and student unrest over the war in Vietnam. Sharp joined vigorously in opposition to the Speaker Ban Law, stating to a special investigative commission that in his judgment, the bill “has already damaged the University; its effects are currently injuring the University; and unless the legislation is removed, the damage already suffered is only a tithe of the injury we will sustain.”

Remembering the 17 months he spent as chancellor, Sharp told an interviewer in the mid-1990s that much of his time and energy was devoted to correspondence, conferences, testimony and speeches across the state seeking repeal of the Speaker Ban Law.

A major administrative initiative by Sharp resulted shortly after his arrival in bringing together academic affairs, health affairs and research administration under one office. To that end, Sharp named Professor J. Carlyle Sitterson ’31, then dean of the College of Arts and Sciences, as vice chancellor of the University.

Despite his popularity with students and faculty alike, his positive initiatives in dealing with the University’s administrative issues and his aggressive eloquence in fighting the Speaker Ban Law, Sharp was to have a brief tenure. It was no secret that he was uncomfortable with what he described as “the numerous and almost constant ambiguities, confusions and embarrassments surrounding the chancellor’s role on this campus.”

Before coming to Carolina, he had been offered the presidency of Drake University and had turned it down. When the offer was renewed in 1965, Sharp accepted and departed Chapel Hill. After five years at Drake, Sharp assumed the presidency of the University of Oklahoma, where he served for six and a half years before retiring as president emeritus and professor of history.

“Obviously we were not in Chapel Hill long enough to achieve major accomplishments,” Sharp told the Carolina Alumni Review in the mid-1990s. “However, we did begin a series of changes that we hoped would improve the effectiveness of administration on the Chapel Hill campus.”

Sharp pointed to three of those changes, which were initiated in leadership in academic affairs, research administration and health affairs. But, he continued, “it quickly became apparent that internal reform on the Chapel Hill campus was only part of the difficulty in moving the University forward in its long journey to excellence and pre-eminence in higher education in the United States. Clearly, the major problem was the lack of definition of responsibilities between the chancellor’s office and the president of the system, between the Chapel Hill campus and its administrative officers and the system president. This was not, nor has it been, a conflict of personalities. It was simply the ambiguous roles of each set of officers and their relationships with faculty, staff and students.”

He added, “Many years ago, the U.S. Navy learned that you cannot have two admirals on the bridge.”

Related material can be found online: