“If you ignore [the changes], you ignore them at your own peril,” he said, “because there is nothing more predictable than demography.” 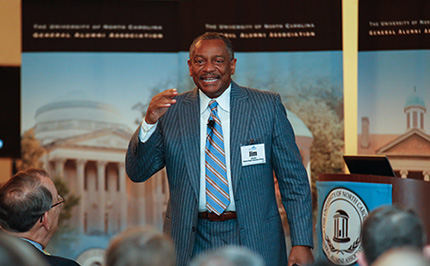 That’s how Johnson, the William Rand Kenan Jr. Distinguished Professor of entrepreneurship at Kenan-Flagler Business School, began his presentation Thursday night to a room full of UNC alumni and friends from the Alexandria, Va., area.

Johnson’s speech was the fourth in a series of five events that are part of the GAA’s Virginia is for Tar Heels program taking place this week in five cities throughout the Old Dominion.

Those who gathered in Alexandria learned about several “disruptive” trends and their potential effect on workforce planning and development. One is the browning of America, which, Johnson said, has its roots in the Immigration and Nationality Act of 1965, also known as the Hart-Celler Act, that abolished nation-of-origin quotas on immigration.

“Put a pin it,” he said. “It’s one of the most profound pieces of legislation that has driven and is largely responsible for the composition of our population as we know it today.”

It opened “the doors of our country,” he said, “to people who heretofore had not been allowed to come, basically people from Asia, Latin America and the Middle East.”

The result, Johnson said, is that “the growth mostly among Hispanics and Asians is going to transform our population down the road.”

To a great extent, it already has. In the latest 10-year census count, for example, Hispanics accounted for 56 percent of U.S. population growth. In comparison, non-Hispanic whites accounted for 8.5 percent of the growth.

“The browning of America,” Johnson noted, is about immigrants changing the complexion of American society.

In contrast, he said, the aging of America is about the native population, specifically the 80 million baby boomers born between 1946 and 1964.

“That’s the silver tsunami,” he said, and it has a wide range of implications, including workforce-management issues related to succession plans and elder-care accommodations.

“Ladies and gentlemen,” Johnson said, “care giving is a $30 billion loss in work productivity in our economy today, and people don’t talk about it.

Among about 100 people listening to Johnson’s speech were three former UNC student body presidents. One of them, Hogan Medlin ’11, who said the numbers Johnson presented were compelling, wanted to know how the data could be used to get beyond politics and the personal interests of policymakers.

In response, Johnson — who also is director of the Urban Investment Strategies Center in the Frank Hawkins Kenan Institute of Private Enterprise at UNC — said that myth busting is one effective tool and referenced his own work demonstrating the positive effect Hispanics have had on the North Carolina economy.

The other two former student body presidents — Reyna Walters ’99 and Jasmin Jones ’10 —  said they could relate much of what Johnson said to their own work.

Jones works for the Washington, D.C., public schools, and Walters is a lawyer with the Social Security Administration.

“You see it [disruptive demographics] playing out in some of our other social systems,” Walters said. “You see it in education. I’m seeing it in the number of cases that I have.”