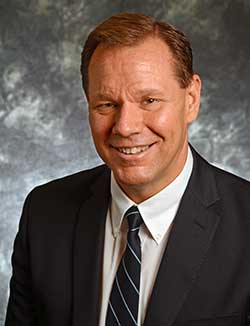 Dr. Bruce A. Cairns, a professor of surgery and director of the N.C. Jaycee Burn Center, will become chair of the faculty on July 1. Cairns defeated Andrew Perrin, an associate professor of sociology, in an election that drew a record 2,000 votes, according to the Office of Faculty Governance.

Cairns is the John Stackhouse Distinguished Professor of surgery, with a joint appointment in UNC’s department of microbiology and immunology. He grew up in Chapel Hill and, as a student at Chapel Hill High School in the late 1970s, remembers buying jelly from the Jaycees to support the opening of a new burn center at N.C. Memorial Hospital.

“At the time, I had no idea that the center would factor so significantly in my life,” said Cairns, who received his surgical training at UNC and joined the faculty in 2000.

Cairns has collaborated with departments across campus, including computer science and African, African-American and diaspora studies, and he works with undergraduates through the Carolina Covenant, Honors Carolina and the drama department.

His honors include the Edward Kidder Graham Faculty Service Award for service to the state, nation and University; the Leonard Tow Humanism in Medicine Award; and the Resident Physician Advocate Award.

He will serve a three-year term as faculty chair, succeeding Jan Boxill, a senior lecturer in philosophy and director of the Parr Center for Ethics.