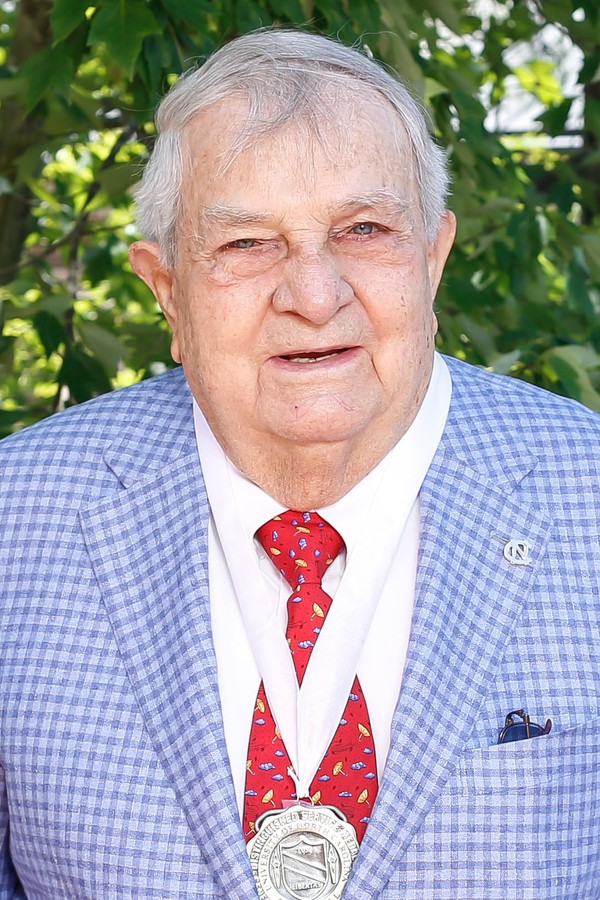 In the spring of 1950, the business school dean had warned Charlie that if he missed one more 8 a.m. class, he’d be out. Then Charlie returned from a weekend at the beach with a broken toe, sufficient justification, he thought, to skip that early-morning class. The dean disagreed. In short order, Charlie and his suitcase were on the highway shoulder hitch-hiking home to Atlanta. GAA Executive Secretary Spike Saunders ’25 pulled over and offered him a lift.

A couple weeks later, after Charlie had resigned himself to a future of helping his mother, Addie, in her restaurant, he received a letter from Saunders spelling out why Charlie should finish his degree. His mother had always told him, “You can be what you want to be, if you pay the price.” Charlie returned to Chapel Hill for the summer session, signed up for the maximum number of classes, and without his buddies around to distract him, he aced the courses and received his business degree in August. A few years later, he founded Aaron Rents, “Aaron” because it would show up first in the Yellow Pages.

Charlie’s success in business grew —Aaron Rents now has some 2,100 stores across the U.S. and Canada, is publicly traded and brings in about $2 billion annually. His philanthropy kept pace. Paul Fulton ’57, while dean of Kenan-Flagler Business School in the 1990s, set up a lunch date with Charlie, despite the skepticism of his colleagues in the development office. Fulton doesn’t recall exactly what they talked about, but about a week later, Charlie sent a check — for $5 million.

Charlie started Aaron Rents in 1955 with a $500 loan he used to buy Army surplus chairs that he rented out for auctions. He embodied the business philosophy of doing well by doing good. A decade later he put his business at risk by renting tents to the Southern Christian Leadership Conference — at half price — for Martin Luther King Jr.’s second march from Selma to Montgomery. People paid in coins and rumpled bills, Charlie wrote in his memoir, Charlie, Just Do Better Next Time. “They were working out of their back pockets,” he wrote. “I knew the feeling.”

The experience touched him, deepening his involvement in the civil rights movement. As part of an interracial group of business leaders, he helped establish Atlanta as a role model for integration in the 1960s. He managed Andrew Young’s successful campaigns for mayor of Atlanta in 1981 and 1985, which made Charlie unpopular with many of his friends. “But that was their problem, not mine,” he said.

Many organizations in Atlanta have benefited from his philanthropy. Born and raised in Atlanta, Charlie enrolled at Georgia Tech at age 16, left to serve in the Navy in World War II, then came to Chapel Hill under the G.I. Bill. His best friend, Charlie “Choo-Choo” Justice ’50, played football at Carolina, and Charlie Loudermilk became a fan for life. (Decades later, he made it possible for a dignified statue of Justice to be installed near an entrance to Kenan Stadium.)

The opportunities granted to Charlie by professors and the dean taking a personal interest in his life course put him on the path to success. As he prospered, he made sure students from later generations had those opportunities, too. One of his gifts made possible the Loudermilk Center for Excellence, through which some 800 student-athletes a year can access strength-and-conditioning training, academic support, student services and the Leadership Academy. He helped fund construction of the McColl Building at Kenan-Flagler and Loudermilk Hall at the Rizzo Center.

Charlie has served on the boards of visitors for UNC and Kenan-Flagler. He was a member of the Carolina First Campaign Committee. In 2000, UNC’s Board of Trustees recognized him with the William R. Davie Award, and he has been honored by an Alumni Merit Award from the business school and the Carolina Leadership Academy’s Leadership of Distinction Award.

“Carolina played a major role in my life,” Charlie said. “And I try to give back.”