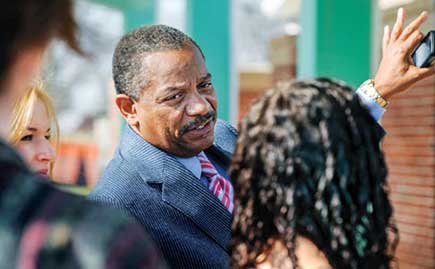 Johnson is the William R. Kenan Distinguished Professor of strategy and entrepreneurship at Kenan-Flagler Business School and director of the Urban Investment Strategies Center in the Frank Hawkins Kenan Institute of Private Entrepreneurship. He was selected to address December graduates by Chancellor Carol L. Folt, in consultation with the Commencement Speaker Selection Committee, which includes students and faculty.

“Jim Johnson’s inspiring work has opened doors for underserved populations in North Carolina and beyond,” Folt said. “His research on changing demographics is shaping the way communities and businesses plan for the future and guides how we keep our economy competitive in the global market. He is a visionary teacher and trusted mentor, and we are fortunate to have his leadership at Carolina.”

Johnson also serves as a senior research fellow at the Carolina Population Center and an adjunct professor of public policy, sociology and geography. He was profiled in the July/August 2013 issue of the Carolina Alumni Review in a feature titled “The Payoff Power of Weak Connections.”

Currently, Johnson researches the economic and employment impact of white-collar job shifts offshore on U.S. competitiveness through his professorship at Kenan-Flagler. He has published more than 100 scholarly articles and three research monographs as well as co-authored several books.

Johnson grew up around the tobacco fields of Farmville, where his parents encouraged his education. He graduated from N.C. Central University summa cum laude in three years and went on to receive his master’s from the University of Wisconsin-Madison and his doctorate from Michigan State University. The University of California-Los Angeles recruited Johnson to work in its geography department, later granting him a full professorship, exploring poverty in urban America. Johnson joined the UNC faculty as the E. Maynard Adams Professor of geography in 1992 and became a Kenan Professor at Kenan-Flagler in 1998. He also received the GAA’s Faculty Service Award in 2009.

Johnson co-authored the report The Economic Impact of the African American Population on the State of North Carolina with John D. Kasarda, who was integral in recruiting Johnson to Carolina. Johnson also has published a study on the economic impact of North Carolina’s Hispanic population. Following the Sept. 11, 2001, terrorist attacks, the Russell Sage Foundation supported Johnson’s publishing of research on the economic impact of the attacks on U.S. metropolitan communities.

He is a founding member and chairs the board for the Global Scholars Academy in Durham, a year-round kindergarten through eighth-grade school aimed at providing smaller class sizes and higher academic performances. The school is a brainchild of Johnson’s, with programs and classes beginning at 7:30 a.m. and running through 6 p.m. weekdays, plus weekend activities.

December’s Commencement ceremony will be held in the Smith Center beginning at 2 p.m. Dec. 14.