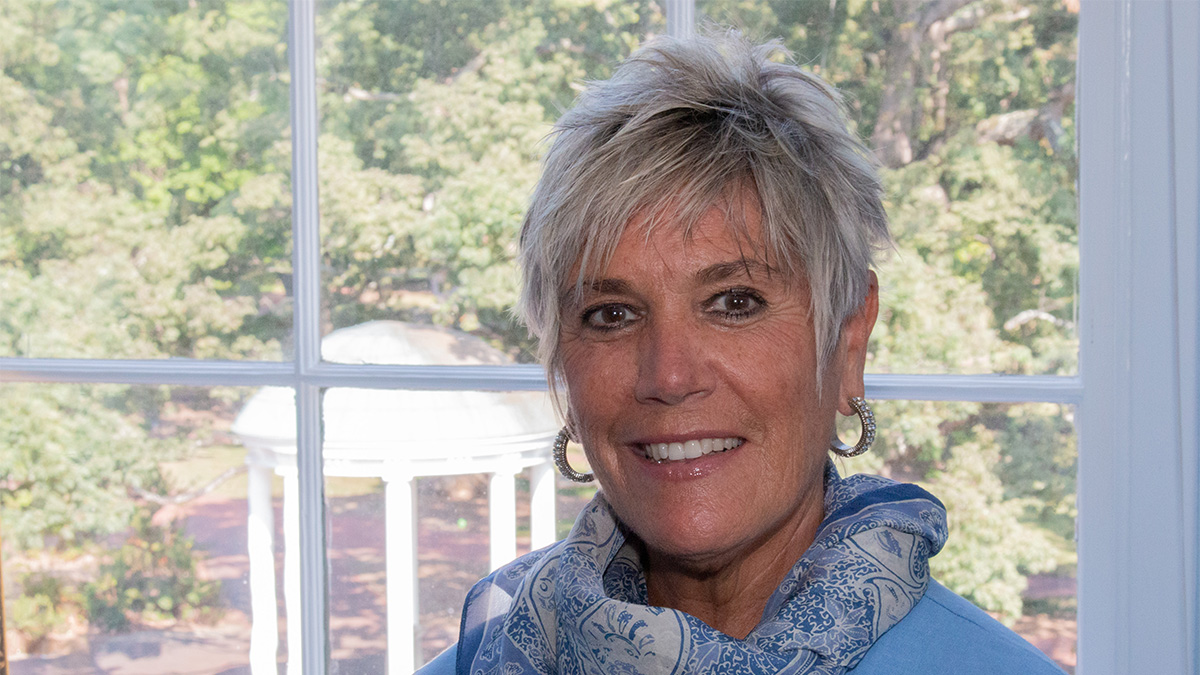 A former chair of the music department, Terry Rhodes ’78 is the first faculty member from the fine arts to be named dean of the college since it assumed its modern-day name in 1935. (UNC photo)

Terry Rhodes ’78, a music professor who entered administration as senior associate dean for fine arts and humanities in 2012, has been named dean of the College of Arts and Sciences, a position she has held as interim for the past year.

She succeeds Kevin Guskiewicz, who was dean before becoming interim chancellor a year ago. Rhodes oversees the largest academic unit at Carolina with more than 17,000 undergraduate students, nearly 2,500 graduate students and more than 70 academic departments, curricula, programs, centers and institutes.

A former chair of the music department, Rhodes is the first faculty member from the fine arts to be named dean of the college since it assumed its modern-day name in 1935.

She was principal investigator on the Humanities for the Public Good initiative from the Mellon Foundation, which seeks to bridge the silos between academic research and teaching and the communities they serve. She also was co-principal on the Carolina Digital Humanities Initiative, also funded by Mellon, which created partnerships and programs that promote innovation, interdisciplinary connections and collaboration around digital teaching, research and outreach in the arts and humanities.

Rhodes led the steering committee for the Carolina’s Human Heart: Living the Arts and Humanities yearlong celebration in 2016-17. That effort showcased the role that the arts, humanities and qualitative social sciences play in helping address the major issues.

Guskiewicz cited several initiatives in which Rhodes was involved as interim dean.

• Reckoning: Race, Memory and Reimagining the Public University, a shared learning experience in fall 2019 that supported student inquiry and dialogue on issues of heritage, race, post-conflict legacies, politics of remembrance and contemporary projects of reconciliation;

• Countering Hate: Overcoming Fear of Differences, a collection of programming and courses that enable the University community to explore the phenomena of anti-Semitism, Islamophobia and other forms of intolerance and prejudice;

• Southern Futures, an initiative designed to make Carolina the place to which the nation and world turn to understand and imagine the South’s future. It involves collaborations across campus, creating an international nexus for conversation and sparking creativity and innovation in Southern communities; and

• UNC Program for Public Discourse, an effort to build the University’s capacity for civil debate, dialogue, discussion and conversation.

Rhodes joined the faculty in 1987 and has been a member of the voice faculty, director of UNC Opera and faculty marshal. She is a former faculty representative on the GAA Board of Directors (2012-13) and has been an enrichment lecturer on several Tar Heel Travel tours.

After receiving her music degree from Carolina, Rhodes earned her doctor of musical arts and master of music from Eastman School of Music at the University of Rochester in New York. She was a Fulbright artist-in-residence/lecturer at the Conservatory of Music in Skopje, Macedonia, in 1993, teaching and performing throughout the Balkans and Eastern Europe. For the past 15 years, she has returned regularly to Spoleto, Italy, to instruct and perform. She is known as a performer of new works, having presented numerous premieres at home and abroad. She has performed throughout the U.S. and in more than 20 countries in Europe and Central and South America.