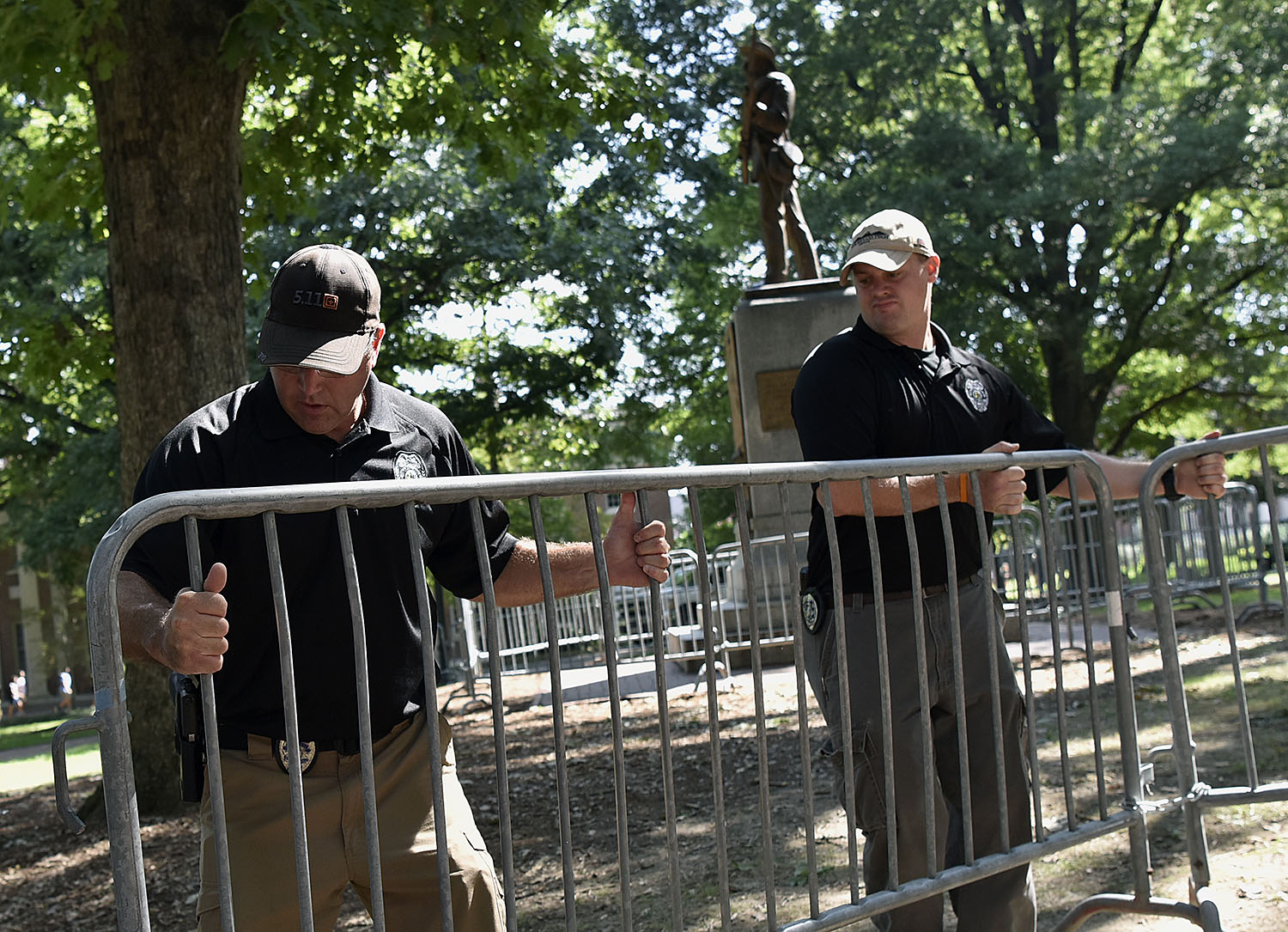 Silent Sam, the campus monument to soldiers who died fighting for the Confederacy, has caught lightning for the University over racial grievances for decades. On Tuesday, after similar statues had been taken down in many U.S. cities, the monument stood inside two sets of steel barricades.

UNC officials were preparing for a rumored protest rally at the site Tuesday night amid much speculation on the statue’s future.

After receiving a letter from the University and UNC System officials warning of the possibility of “significant safety and security threats,” Gov. Roy Cooper ’79 (’82 JD) said University officials were within their right to remove the statue if they perceived an immediate threat similar to the chaos that broke out in Charlottesville, Va., on Aug. 12.

This is despite the existence of a law, enacted by the N.C. General Assembly in 2015, that prohibits the removal or relocation of publicly sited monuments without the permission of the N.C. Historical Commission.

The University’s letter was signed by UNC System President Margaret Spellings, Chancellor Carol L. Folt and the chairs of the UNC trustees and the system Board of Governors. Cooper, who has said he favors removal of Confederate monuments, wrote in response: “Other university leaders have taken decisive actions in recent days. If our University leaders believe there is real risk to public safety, the law allows them to take immediate measures.”

On Tuesday afternoon, the University posted an update “on the status of the Confederate Monument, better known on campus as Silent Sam.”

“Despite how it is being interpreted in the media,” the update read, “the University has not been given the clear legal authority to act unilaterally. Governor Cooper cites a provision where removal would be permitted if a ‘building inspector’ concludes that physical disrepair of a statue threatens public safety, a situation not present here. The University is now caught between conflicting legal interpretations of the statute from the Governor and other legal experts.

“Based on law enforcement agencies’ assessments, we continue to believe that removing the Confederate Monument is in the best interest of the safety of our campus, but the University can act only in accordance with the laws of the state of North Carolina. As we continue to seek clear guidance and legal authority to act, we ask for your patience and cooperation to help us maintain as safe an environment as we possibly can. Your safety and the safety of our community will always be our first priority.”

As of Tuesday, Confederate monuments had been removed in about 20 U.S. cities, and proposals for removal had been made in about 15 more. Duke University — which as a private institution is not affected by the law against removal — last weekend took down a statue of Robert E. Lee, which had stood in the front entrance to Duke Chapel, after the statue was vandalized. Also last weekend, the University of Texas took down three Confederate monuments.

Folt had told the Carolina community on Monday that the rumored rally “is being promoted by groups not affiliated with Carolina, but we realize this event may garner interest among those on our campus. Following the tragic and horrific events in Charlottesville, as well as other demonstrations around the country including in Durham, we understand the strong desire of some members of our community to participate in a protest calling for the removal of the Confederate Monument.”

The message encouraged people to not attend the rally. It added: “UNC Police, augmented by other law enforcement agencies, will take strong measures to help ensure that events such as the one planned for Tuesday evening take place in a safe environment. … If you do choose to attend, we ask you to stay alert and vigilant. Campus police will be present to help address safety concerns. … If you are not attending this event, please avoid McCorkle Place and the area around the Confederate Monument.”