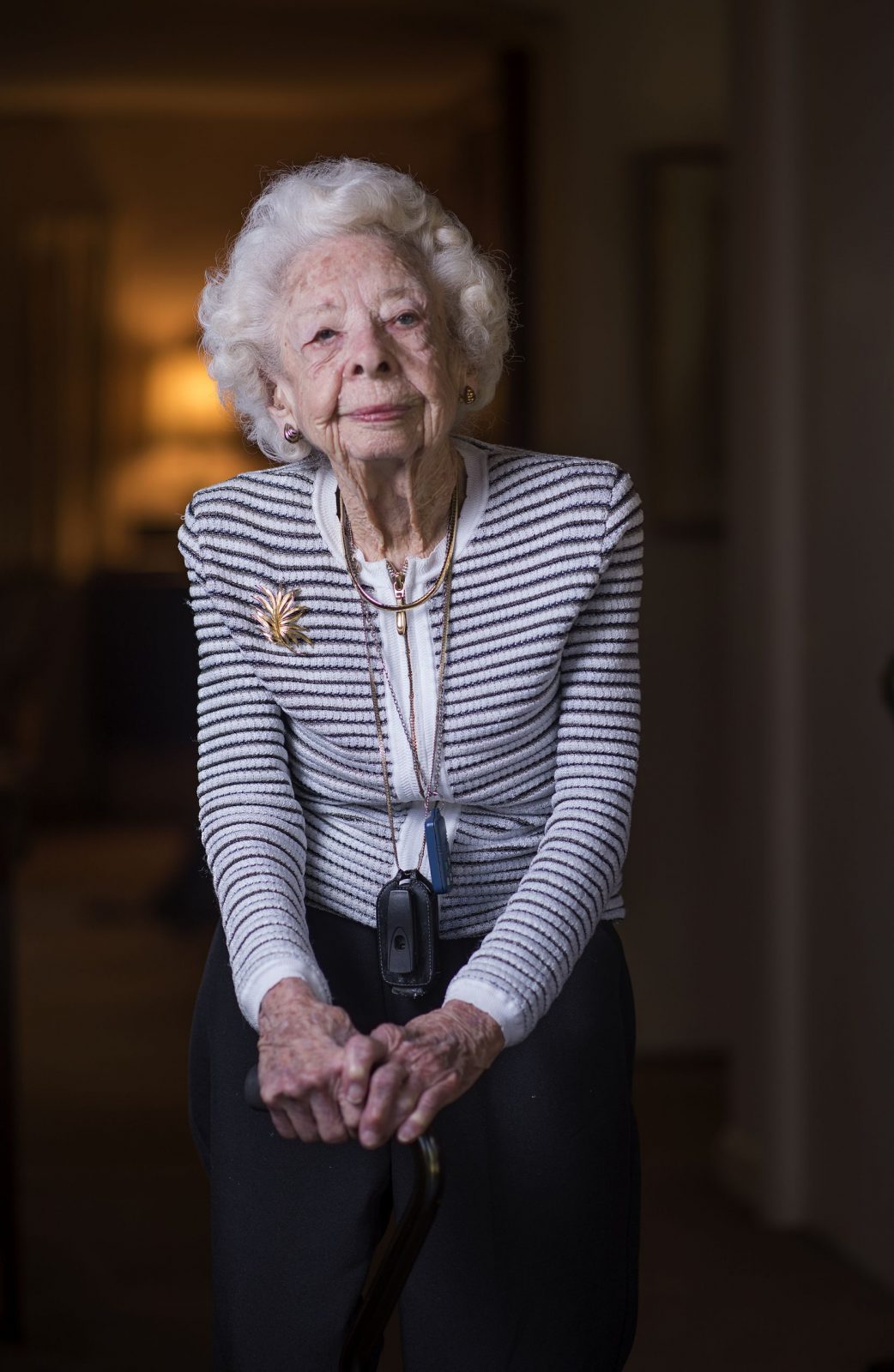 Martha Caldwell ’39 was born small but has lived a big life. (Photo by Grant Halverson ’93)

Martha Gunter Caldwell ’39 was on the small side from the beginning, but she has lived a big — and long — life.

When Caldwell — who turned 100 in April — was born, the doctors didn’t weigh her until she was wearing clothes, and even then the scale barely tipped 5 pounds. Three years of her childhood were spent in a back brace, and her parents constantly fretted about her health. In grade school, she had to drop out for a year to follow a rigorous regimen of physical therapy meant to correct the crooked bones set in her tiny frame. “She’s small, and she’s always going to be small,” Caldwell remembers one doctor saying later in her childhood.

She may still be short — she’s a 4-foot-10-inch centenarian — but the scope of her life has been long. She still lives in her house by herself, surrounded by memories of a full life, about which she gives quick-witted accounts: a ticket from Super Bowl II, when Green Bay beat Oakland 33-14; photos from one of several trips to Antarctica. And there are memories from UNC everywhere — a textbook, a yearbook, a vintage Daily Tar Heel — in her ranch-style home, which she navigates with ease without cane or walker. 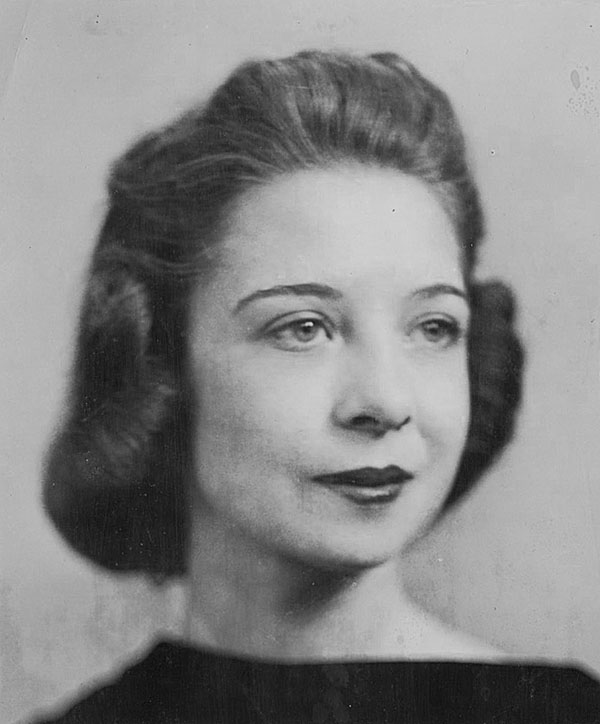 Caldwell graduated from UNC at a time when few women attended college. She lived in Spencer dorm, joined Chi Omega and ate on Franklin Street (the Carolina Coffee Shop was a favorite). At a UNC dance, she met the man who would become her husband, Dr. Jesse B. Caldwell Jr. ’38 (’39 CMED), for more than 50 years.

She fell in love with the University, too. Her devotion to Carolina was contagious, and myriad children and grandchildren went on to attend the University. You might see some of them and their matriarch passing a funnel cake around Kenan Stadium at their annual family reunion, which is always planned to coincide with a UNC home football game.

“I still love Chapel Hill — I still love it. And every time somebody goes, I say, ‘Blow a kiss to the Old Well for me,’ ” Caldwell says. “Yes, I’m a Tar Heel. Hark the sound!”

When you were at Carolina, what was a typical day like?

“Usually you had to get up early. And if you had an 8 o’clock class, boy, you did get up early. And Saturday classes — you always hated to have one in the morning. But somehow I would get one every now and then. … And then at night we usually — I mean you didn’t date much during the week unless somebody was coming over and, you know, we’d sit around and listen to some music or something. But sometimes you would have a date during the week.”

What was dating like in the 1930s at Carolina?

“You might go to Graham Memorial. … They sometimes had little dances or something, you know. Or I can remember sometimes you’d go down to the Tin Can if the people were wrestling or boxing, or different groups. You know that was kind of a little entertainment. You walked. You walked on dates. Or you might go to a movie on a weekend. … There were a lot of things going on on campus.”

Was the Varsity Theatre open on Franklin Street then?

“Well, there wasn’t that much to do I guess. … Sometimes you’d meet with other couples and just have a little gathering, you know. It was not all like ‘out for romance’ or anything, it was just having a good time. And I can remember sometimes they would open Kenan Stadium in pretty weather and they would have the band out there. And you go and you take pillows to sit on. And that was a nice little evening for a date. Because everyone loved to be in Kenan Stadium and hear the band, you know.” 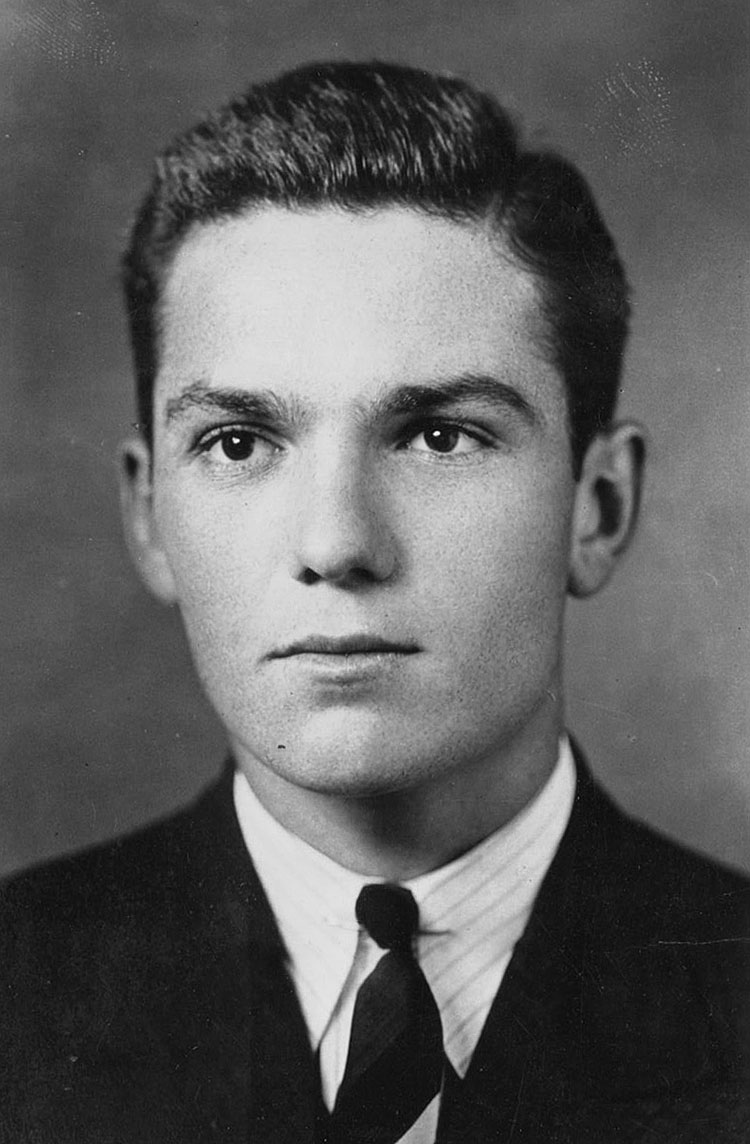 You met your husband at UNC?

“I met my husband at a dance at Graham Memorial. In those days, of course, the big dances were in the Tin Can. But in those days, they would sometimes have small dances in Graham Memorial. … My parents had known my husband’s parents, and they had told him I was there, and so I met him there. And we were friends all during college, and then he went to med school, and then as an intern he went into the Army. He was in the Army several years and ended up in the Battle of the Bulge. We were still friends. I wrote to him as I wrote to a number of the servicemen. But it was only when he came back and had further training in New York and came to Bowman Gray [medical school in Winston-Salem] for training that we really began to date, you know, seriously. So, I knew him a long, long time. But he had his profession to train for … so it was years after college when we began to really date.”

You graduated in 1939, as World War II was starting. Did friends you met in college go on to fight in the war?

“Yes, in fact, World War II affected me greatly. Because we would get the casualty list, somehow the papers would print it… And I could see the friends of mine, names of who’d been wounded. … Anyway, you would see the list, and it was very emotional, and I was teaching, but I wanted to have a part in the war. And so they would not take me in the WAACS [Women’s Army Corps] or the WAVES [Women Accepted for Volunteer Emergency Service in the Navy] because I didn’t weigh enough. I’ve always been small, weightwise. But I did get into Red Cross. Not to go overseas, much to my sorrow, but in the United States.”

How did you go from Carolina, to the Red Cross, to Gastonia, to Antarctica?

“My husband liked to travel and see the world. And, of course, his profession tied him down greatly. But he loved nature, and I remember we took one trip down the coast of South America … to the very end of the country, and we ran into these people that were coming back from Antarctica. And he started talking to them, and he said, ‘Did you really enjoy it?’ He said, ‘Oh, yes, if you go once you’re like to go again.’ So he wanted to go because he wanted to see the world, he loved all that.

“In Antarctica, he and the ship’s naturalist were always out looking at the whales or the sharks and, of course, the millions and millions of penguins we saw, you know. He loved all of that. … One time, it’s strange, but not many ships go from New Zealand to Antarctica. That ocean is very rough, but he found a trip that was going from New Zealand to Antarctica, and he said, ‘Let’s take that.’ So we did. Coming back, we were in the worst storm I’ve ever been in in my life. It was a great ship, it was a Japanese ship with a Filipino crew. … It was so bad the captain said, ‘Go to your cabins, get in your bed and don’t get out of the bed.’ We literally crawled to the bathroom, you know. … I wore the ear patches … and I was one of the few on the ship that didn’t get seasick. My husband, who was never seasick, was absolutely laid out flat. Laid out flat. But that Filipino crew that’d come into our room — I don’t know how they walked. They’d put soup and sandwiches next to our beds for us to eat during that bad storm. But I was up and out before my husband was because he was really laid out. That taught him a lesson.”

So your husband was a fan of Antarctica. Were you?

“I loved it, I did love it. And most of the time we just went in to a port where some ships would go in, and then you’d go up and climb up the mountains, and it was a thrill to be there. But then we had one — the one where we went from New Zealand — we landed, and there was a big American base right there. So, we got to see more of it. We saw the base and how these people lived all the time down there. Every time he wanted to take a trip, no matter where, I was always ready because we did enjoy seeing the world. … We didn’t see all of it, of course, but we enjoyed the traveling.”

You are a centenarian, and congratulations on that. Any advice for those of us who would like to join you sometime down the line?

“I’m always trying to eat right. My mother always had good meals. I don’t eat a lot at one time, but I’ve always tried to eat a good — at least something for breakfast and I still do that. And other meals — just have a good menu during the day. And when I was working in Chapel Hill, and when I worked anywhere, I would always try to have good meals. And I have not specialized in exercise until I really came to Gastonia. But I never had a car of my own. So in Chapel Hill I walked everywhere, even when I was working there.”

What advice would you give a student just starting at UNC?

“Make friends, because there are all kinds of people there. There are those who are rich, those who are not rich, but it doesn’t matter about that when you’re down there. Just be friends with those who like the same things you do. And always go to the classes and take in all you can because you’ll be glad you did. Don’t skip the classes, keep going all the time, that’s very important.”