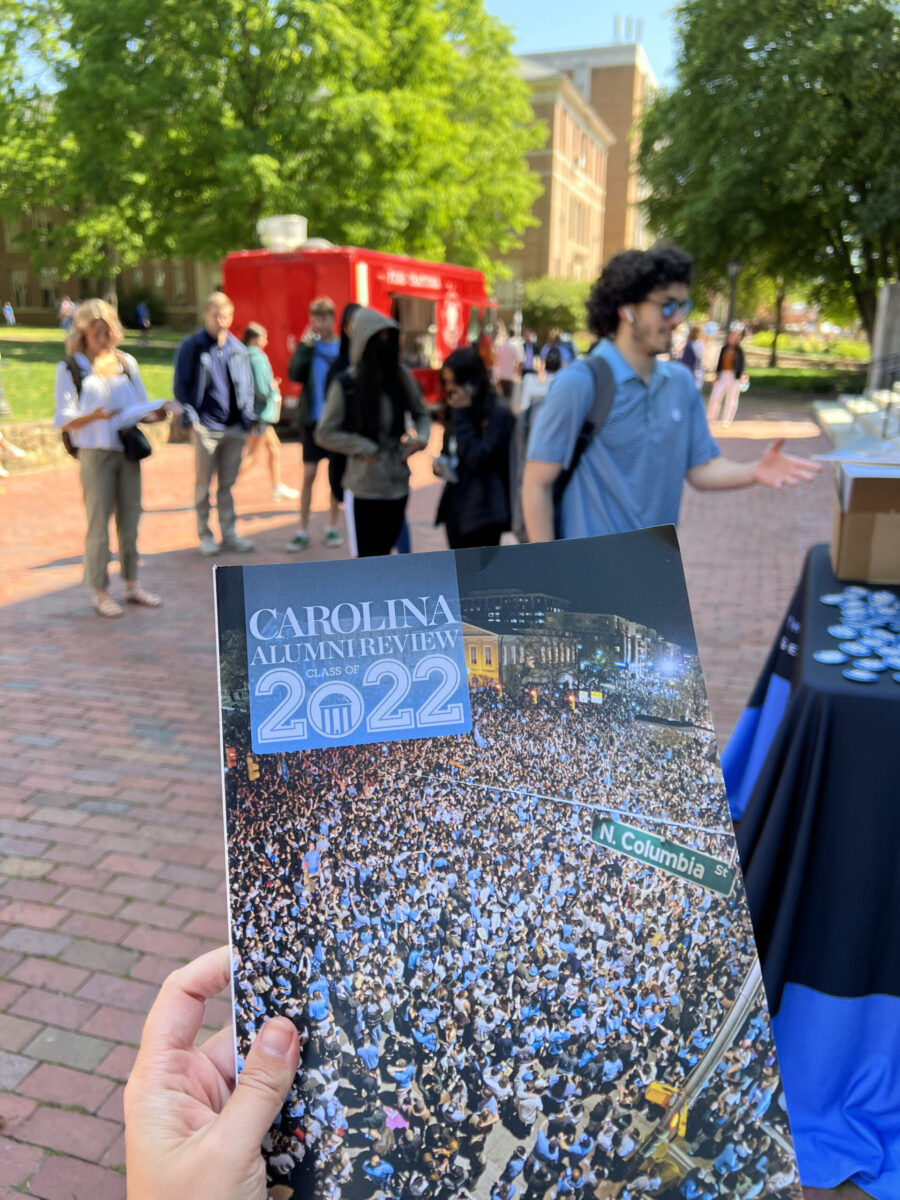 Outside Wilson Library on the last day of class, graduating students could pick up copies of a special Class of ’22 edition of the Carolina Alumni Review.

Smiles, hugs and sheer happiness took over the Pit on April 28 during LDOC, or Last Day of Classes, as students played games for prizes and stood in line for free pizza, donuts and other goodies. They also took photos with their friends — and with Rameses.

For seniors only, awaiting them at a booth outside Wilson Library were copies of a special Class of ’22 edition of the Carolina Alumni Review, a magazine produced by the General Alumni Association.

Bearing the class of 2022 logo and a photo from the scene on Franklin Street after the Tar Heels beat Duke on April 2 in the NCAA national championship semifinals, the special edition features stories and photos highlighting the senior class’s four years on campus.

“Happy LDOC,” said Sam Nieman while arriving for her copy. Nieman, a global studies major from Durham, said she thinks LDOC is exciting “because with it being my senior year, it’s kind of the last big party before graduation.”

Sophomore Animesh Acharya, an economics and business major from Charlotte, attended LDOC with friends. “This is my first LDOC, and I think it’s amazing that all of us can come together, enjoy ourselves and relax and have a good time,” he said. “Exams begin on Friday, so this is a very good stress reliever.”

Acharya spoke while standing in line for a chance to spin a wheel for prizes ranging from T-shirts to hats to tote bags to cell phone adhesive card holders.

Zara Petrocy, a junior biology major from Elkin, sported a Carolina Union Activities Board hat she won while checking out LDOC, where she took advantage of the free pizza, snow cones and donuts and also made a customized street sign bearing her name.

Petrocy, who attended LDOC with Jessie Zheng, a junior biology major from Wilmington, said she appreciated the University for throwing the party. “I think it’s conflicting a little bit because they’re also encouraging us to study more, but in the end, I like getting the free stuff.”

Sophomore Animesh Acharya, junior Zara Petrocy and first-year student Nigel Parker each enjoyed LDOC festivities in the Pit. “It’s a lot of fun, and I love the amount of people that are here and the events they have going on,” said Parker, a sociology and psychology major from Baltimore.

Meanwhile, on the steps of the South Building, about 100 students protested to demand a more accessible campus for people with disabilities. The protest was organized by Campus Y co-presidents Laura Saavedra Forero, a first-year neuroscience major from Charlotte, and Megan Murphy, a junior global studies and public policy major from Nashville, Tennessee.

“We want to be listened to as disabled students,” said Saavedra Forer, who woke up paralyzed after her third hip surgery. “I just want the Carolina experience I was promised.”

“It’s a lot of fun, and I love the amount of people that are here and the events they have going on,” said Parker, a sociology and psychology major from Baltimore. “It just kind of takes the pressure off from finals.”