Today before the nation’s highest court, Chancellor Kevin Guskiewicz will defend the University’s inclusion of...

UNC released in July the details of its settlement with Nikole Hannah-Jones ’03 (MA), who... 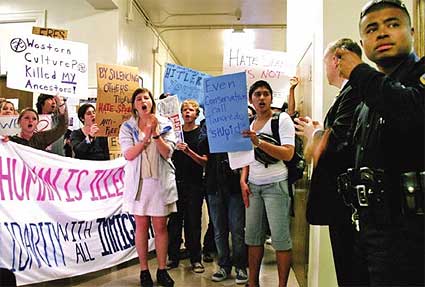 UNC police used pepper spray and the threat of a Taser to break up a crowd of protesters on April 14 in Bingham Hall after the planned protest halted a talk about illegal immigration by former U.S. Rep. Tom Tancredo.

Members of Students for a Democratic Society, Carolina Hispanic Association and Feminists Students United staged a protest against the Republican from Colorado, an outspoken critic of illegal immigration.

The muzzling of a speaker who had been invited to the campus brought down a hail of public criticism on the University. Chancellor Holden Thorp ’86, UNC System President Erskine Bowles ’67 and trustees Chair Roger Perry ’71 deplored the protesters’ actions.

One week later, six people – none of them UNC students – were arrested on disorderly contact charges for their involvement in disrupting a speech by Virgil Goode, a former U.S. representative from Virginia. Goode, an opponent of affirmative action, was able to speak to about 150 in the Great Hall of the Student Union. Some protesters held banners and tried to speak over Goode, but officers quietly escorted them out of the building.

The UNC student group Youth for Western Civilization, a national organization of students who oppose mass immigration, multiculturalism and affirmative action, brought both speakers to campus.

At the Tancredo appearance, protesters were inside and outside Bingham 103, a first-floor classroom, shouting profanities, waving signs and chanting. About 15 minutes into the speech, protesters in the classroom holding a banner moved to the front of the room and held it in front of Tancredo. The speaker grabbed the banner and attempted to confront the protesters, telling them, “That’s not fair.”

At about that time, someone broke a window from the outside. At the sound of breaking glass, Tancredo left the room, and police moved in.

Police spokesman Randy Young said officers expected there to be dissent. When the room was at capacity the officers blocked the door and warned the crowd to stay back.

“The verbal warnings were ignored, and the crowd outside of the hallway continued to press forward, at some point coming into physical contact with the officers,”  Young said. “Seeing that all attempts of verbal communication were futile, officers decided the situation was incendiary.”

It was then the officers released a “broadcast issuance” of pepper spray meant to disperse the crowd, and, because the crowd kept pushing, an officer activated a Taser but did not deploy it.

Before the event, campus security removed two women who delayed Tancredo’s speech by stretching across the front of the classroom a banner that read “No dialogue with hate.”

Tyler Oakley, a member of Students for a Democratic Society, said the women being thrown out of the event was the catalyst. “In our minds, it was this show of police force and brutality that really ignited things,” he said.

People were removed from the building, and a tug-of-war ensued between the police and protesters as the officers tried to shut the door. It went on for about 20 minutes before the police were able to close and lock the door.

Young said Tancredo left on his own accord, and police never advised him not to speak.

Thorp said the Division of Student Affairs  would join the investigation and that, if appropriate, students involved could face Honor Court proceedings. He said he called Tancredo to apologize for the way he was treated. On April 23, a UNC junior, Morehead-Cain Scholar Haley Koch, was arrested and charged with disorderly conduct in connection with the Tancredo protest. She was released on $1,000 bail.

There will be an internal investigation of the use of force by police officers, Young said.

Thorp, in a letter to the campus community, wrote, “Carolina’s tradition of free speech is a fundamental part of what has made this place special for more than 200 years.

“We expect protests about controversial subjects at Carolina. That’s part of our culture. But we also pride ourselves on being a place where all points of view can be expressed and heard. There’s a way to protest that respects free speech and allows people with opposing views to be heard.”