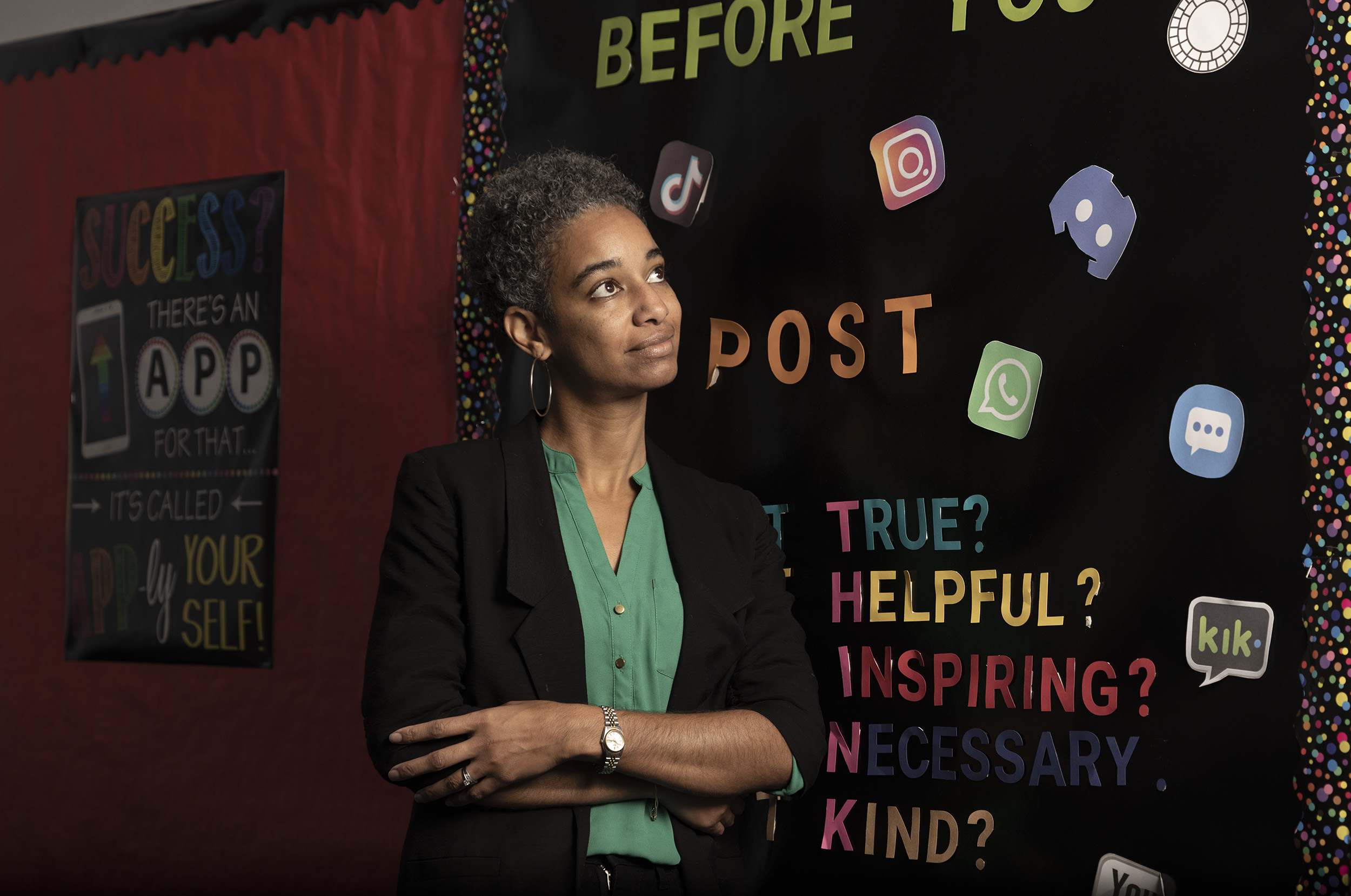 Michelle Shomo Pierce ’00 was one of 10 educators nationwide to be honored with Amazon’s 2021 Future Engineer Teacher of the Year award. (Grant Halverson ’93)

Michelle Shomo Pierce ’00 stands at the head of her classroom, a stack of red cups on the table in front of her. On the whiteboard behind her, she’s drawn a series of arrows. Right. Left. Down. Up.

“OK, my arm is a robot. It will only do what you’ve programmed it to do,” she says. “So read the code and tell my robot arm what to do.”

Pierce — a middle school computer science teacher at the Mallard Creek Stem Academy in Charlotte who was recently named an Amazon Future Engineer Teacher of the Year — is getting her eighth graders excited about rudimentary programming by having them build structures with cups. Each arrow is code for the cup’s movement in any direction.

As students call out directions, her “robotic” hand lowers to pick up the cup, moves it to the right two spaces, lowers it, returns to the beginning. She picks up another cup and the students direct her, more or less in unison — four spaces to the right, lower, return — until she’s built a pyramid five layers high.

Students chatter as they write arrows on their desks with dry-erase markers. Arrow up, right, down, left, thinking methodically through each move the robotic arm will need to make.

Assistant principal Raheem Roberts checks in, and students clamor for him to try their code. His arm becomes the robot’s, and with kids watching, he follows the arrows to build a teetering tower. The students applaud.

“Ms. Pierce is awesome,” says eighth grader Mason Kelley, who has already programmed games based on what he’s learned. “I look forward to coming to school on the days I have her.”

“Her application essay almost brings me to tears. … She’s dealing with students who might not get adequate sleep that night and might not have dinner on the table, but they’re so happy to be around her and the things that she’s showing them. They’re all in and wanting to know more.”

Pierce is one of 10 educators nationwide honored with Amazon’s 2021 STEM teaching award for their dedication to promoting diversity and inclusion in computer science education in underserved communities. The award came with $25,000 for the school, which will go toward designing curriculum for its innovation academy, Roberts says, and to jumpstart a competitive robotics team. Pierce will receive $5,000, which she plans to use to pay for enrichment camp and activities for her son, who has autism but also an innate affinity for electronics.

“Her application essay almost brings me to tears,” says Christy Borseth, program manager at Scholarship America, which administered the Amazon awards. “She’s not just teaching computer science, she’s also teaching digital responsibility. She’s dealing with students who might not get adequate sleep that night and might not have dinner on the table, but they’re so happy to be around her and the things that she’s showing them. They’re all in and wanting to know more.”

Pierce says she has always been a “STEM geek,” interested in science, technology, engineering and mathematics. She graduated from N.C. School of Science and Mathematics, then from UNC with a degree in biology, with the goal of becoming a doctor — until she realized that she didn’t like the sight of blood. She became a clinical researcher instead, but found that boring. What was fun was working with students at her church.

“I loved it,” she says. “I loved the energy feeding off of them, loved teaching them things, and I told my husband, ‘Hey, I have this great idea. I’d like to quit my job and go back to school to become a teacher.’ ”

Pierce and her husband, Michael Pierce, have two children. When Mallard Creek was opening five years ago, Pierce attended an introductory meeting.

“I met the principal, and she said, ‘You’re going to work for me one day,’ ” says Pierce, who had stayed home with her children and let her teaching license expire. Still, she substituted a few times, which turned into long-term substitute teaching, which led to a renewal of her license and her current job. “So now the principal is like, ‘I told you you would work here one day.’ ” 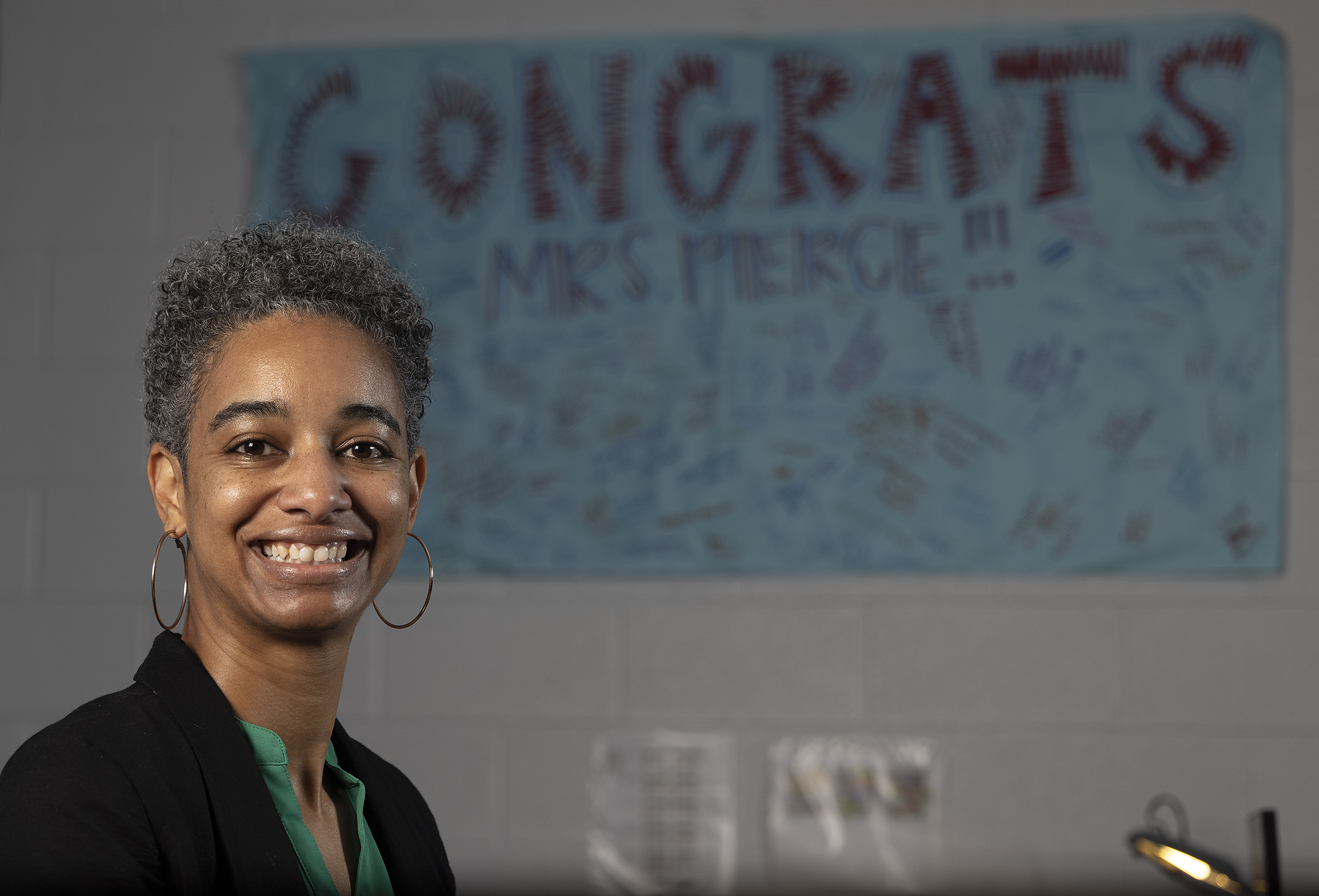 Her classroom is noisy. Streamers hang from the ceiling in celebration of her award, and students — who had been out of the building for two weeks on COVID isolation — jump to touch them. They talk excitedly as they hang up their backpacks and choose seats.

A girl runs in from the hall and hugs Pierce. “I know you miss me!” the student says. “I do,” Pierce answers, and the girl runs back out.

Pierce has warm relationships with her students, Roberts says, including the ones she doesn’t get to teach.

“She’s a great mentor to some of the girls,” he says. “They trust her.”

That trust is vital in a school in which 93 percent of its 960 students are children of color and 38 percent qualify for free or reduced-price lunches. The school was founded to prepare students for a world in which technology touches every career. According to the U.S. Bureau of Labor Statistics, the market for computer science professionals is expected to grow 11 percent by 2029. They’re good jobs, too, with a median pay, as of last May, of $91,250 — more than twice the median annual wage for all occupations.

“I feel like computer science is going to empower a lot of things in the future,” says seventh grader D.J. Allen. “If I have a job in some kind of engineering facility, or if you’re trying to design something for the city you’re in, whatever you’re trying to do in life, you need to understand technology.”

Students learn to code websites and animation, but Pierce also teaches them about privacy and online stalking, about sexting and the importance of balancing their time on screens with time with family and friends. She also stresses the importance of representation in technology, especially for women and people of color, pointing to facial recognition software that doesn’t accurately recognize nonwhite faces.

“We need to involve different points of view,” she tells her students. “If we bring in different people in the testing phase, it’s going to bring in new ideas. But if we’re using the same population of people for everything, what’s developed is going to be limited to their experiences. This is the only way we’re going to innovate. We need people to come up with things that haven’t been done before, and to do that you need to be in the room when it happens.

“If you’re not in the room when decisions are being made — what is it I always say? — they’re being made about you without you.”