'Thank Him for the Assist': Thousands Gather to Remember Dean Smith 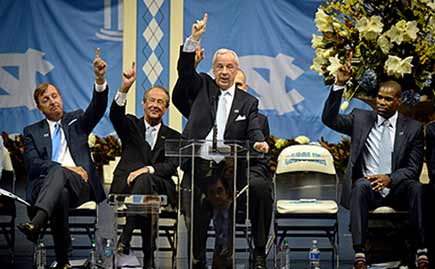 Mickey Bell ’75 joked that he was brought in to prove that the coach treated everybody with the same caring and dignity. Bell, lightly used as a player and later a success in business, shared the stage with Carolina basketball phenoms Billy Cunningham ’65, Phil Ford ’78, Brad Daugherty ’86, Eric Montross ’94 and Antawn Jamison ’99.

“How do I explain that he was a great coach,” Bell said, “but he was an even better person? … He coached you to be a man for a lifetime. He never talked about winning, only improving.”

About 10,000 people came to the Smith Center on Feb. 22, and thousands more watched on TV and online, as Carolina said goodbye to Dean Smith in a UNC-sponsored tribute presided over by Chancellor Carol L. Folt. Another of Smith’s players, Dave Chadwick ’71, gave the invocation.

Cunningham said the teams he played on should get credit for “molding” Smith in the lean, testy early 1960s.

Ford: “If there’s a model of how we should live our lives, we need look no further than Coach’s life.” He said the architect of the Four Corners and its model practitioner formed a bond when Ford was a freshman “that lasted his entire life.”

Montross: “For many of us and for many of you, the first thing we think of is a magical comeback, a championship or a victory over a rival. But more impressive than those on-court achievements is the indelible mark he has left on society. He brought the fight for desegregation to college sports and used the game of basketball as a vehicle to carry the message — a faith-based message of humanity — onto a national stage.”

Jamison: “You didn’t realize it until you saw other players from other programs so jealous and so envious of the type of family that we had. They’re always saying, what is it about you Carolina guys that make y’all so special? You knew they wanted it, but they just couldn’t have it.”

Woody Durham ’63, whose voice relayed 26 years of games that Smith coached, read a powerful lesson from the part in a biography of Smith where he discussed those formative years. “I did two things that weren’t very smart. I never settled on a starting lineup. I tried too hard to make Billy Cunningham an All-American, which was achieved. … My shuffling of the lineup confused the players, and we ended up asking too much of Billy. I vowed I would never again lose sight of the fact that it’s a team game.”

Roy Williams ’72, one of many people close to Smith who never would address him as anything but “coach,” said: “I had a coach one time that said that if you coach a guy … 30 years later you can still see something that you gave him — and to really make sure it’s something positive. Every day our lives show something that Coach Smith gave us. The way we treat people with respect and dignity, and the way we care, because that’s what Coach Smith did.”

Williams led the crowd in pointing a finger upward to “thank him for the assist.”