Last year, Boston College spoiled UNC’s perfect season on its way to a national title. But not this year. Carolina has now played in 10 of the last 13 Final Fours, firmly cementing the Tar Heels as one of the no-doubt elites in women’s lacrosse, just as Jenny Levy had planned it — at age 24. Photo: AP Images/Scott Serio
Posted on July 15, 2022

Once viewed as an unlikely choice to be women’s lacrosse coach,
Jenny Levy led her team to an undefeated season
and its third national championship.

As the bus rolled out of Baltimore, the boisterous passengers — Carolina’s just-crowned, NCAA women’s lacrosse champions — took turns telling stories and reliving moments from their undefeated season and triumphant Final Four weekend. But the players and coaches decided one more memory needed to be made: a team photo at the Bell Tower, lit bright Carolina blue in celebration of their victory.

“It’s not every day you do something that gets the Bell Tower lit blue,” Jenny Levy, the women’s lacrosse head coach, would later say.

The bus pulled up on an empty South Road on a summer holiday weekend just before midnight on the day they delivered the program its third national championship in the last nine full seasons, beating ACC rival Boston College 12-11. But the team photographer had forgotten her camera’s flash.

Turns out that was no problem for a group of players who dug out of a colossal hole in the semifinals and then held on for a 1-point victory in the title game. Without hesitation, the players, still wearing championship T-shirts, pulled out their phones and turned on the flashlights to illuminate their faces for the historic snapshot. “It was so much cooler like that than it would’ve been with the flash,” assistant coach Emily Garrity Parros ’13 said.

Levy, standing in flip flops, also proudly took photos of her players, more than nine hours after they’d hoisted the trophy at Homewood Field in Baltimore, where she had watched games while growing up about a mile away. Arriving at this moment seemed at times both inevitable and improbable, because of circumstances faced that weekend and because of how this all began. 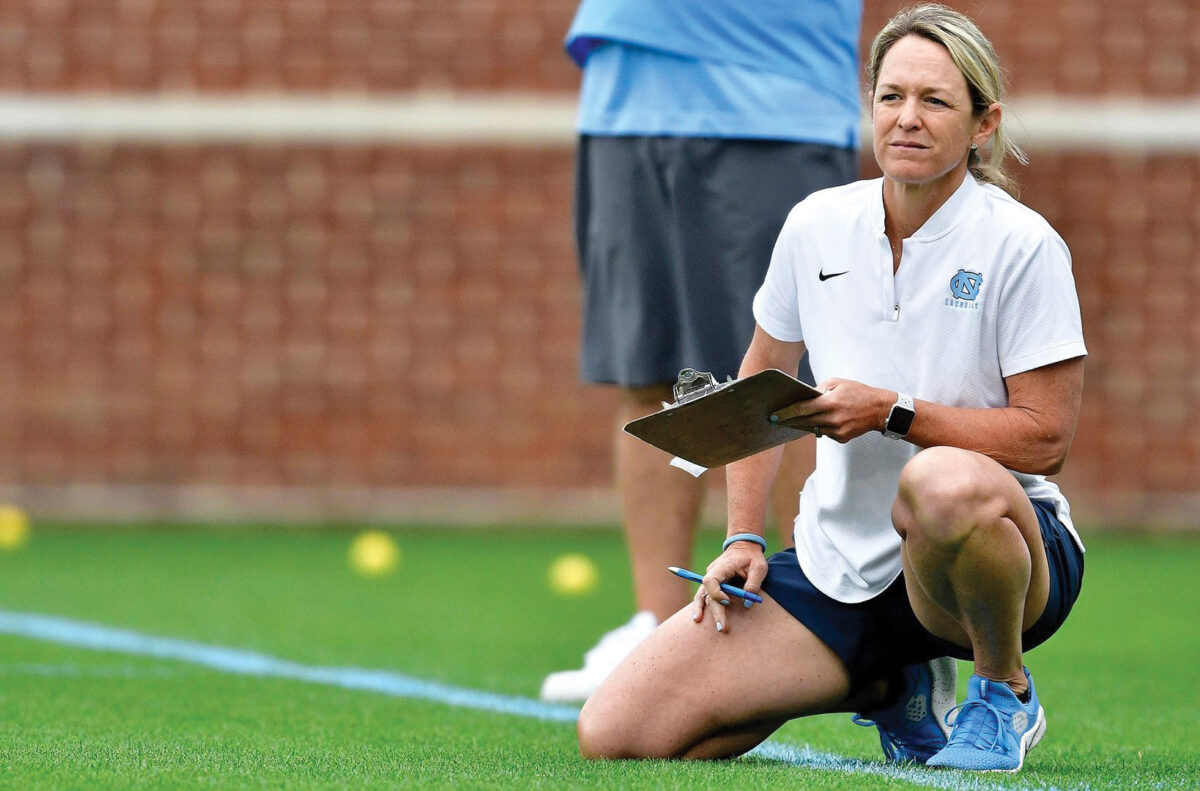 The first step was finding a head coach. About 75 people applied, including Levy (then Jenny Slingluff), who was the NCAA Tournament’s Most Outstanding Attacker in 1991 while winning a national championship at Virginia and later an assistant coach at Georgetown.
But she was only 24 and two years out of college. She didn’t think she had much of a shot at the Carolina job. With a recommendation from the men’s lacrosse coach, Levy landed an interview. She recalls being the only candidate interviewed who had no head coaching experience.
Levy wrote out a plan detailing how she would build the program from scratch to quickly contend for national championships, despite playing outside lacrosse’s regional hotbeds of the Northeast. In her mind, Levy thought she could have Carolina contending for championships in the program’s third or fourth season.

Levy had never been to Chapel Hill, but the next day after her interview, then-athletics director John Swofford ’71 called to offer her the job. Levy accepted on the spot. When UNC announced the hire, Swofford said “her enthusiasm for our new program is infectious.”

Levy had plenty of women’s programs to emulate at Carolina at a time when women’s soccer, field hockey, women’s basketball and more were excelling. Women’s soccer coach Anson Dorrance ’74, the only other coach presently at Carolina who has been with a program since its birth, quickly became a mentor and friend. Levy observed soccer practices and implemented their training techniques and borrowed from other coaches as well. “One of the goals of that first-year team was to be respected by the other athletes here at Carolina,” Levy told The Daily Tar Heel a few years later.

For her first team, in 1996, Levy constructed a schedule with which she thought her group — former club players mixed with transfers, athletes from other sports and a few recruits — could win about half its games. Instead, the Heels finished 12-4 and ranked 13th nationally. “One of the things that struck me was her ambition,” Dorrance said after that early success. Levy “wanted to get things done right away.”
In years two and three, Carolina made the Final Four. A bit of a backslide occurred after those opening seasons, but Levy simply adjusted her plan as her experience and knowledge grew. In a sport that was dominated by a few programs, Carolina women’s lacrosse broke through in 2013, winning its first national championship, and then again in 2016.

“She is always educating herself,” said Parros, who played on UNC’s first title team and now plays for Levy on the U.S. National Team, which competed in the World Championships this summer. “She is constantly reading books about anything from sports psychology to legendary teams.”

Carolina had to scrap for every advantage to squeak by No. 3 Boston College,
which featured the nation’s top player and was playing in its fifth straight national title game.

“Refuse to go away”

There was still plenty of reason for doubt during this May’s Final Four when Carolina faced what seemed, to most, an insurmountable 8-goal deficit late in the third quarter of its semifinal against No. 4 Northwestern. Although the Tar Heels insisted they always believed, the players arrived at the post-championship press conference repeating to each other “holy sh–,” expressing the awe of what they’d accomplished, as pieces of net hung from their necks and championship hats.

In the miraculous semifinal, No. 1 Carolina went down big and immediately to Northwestern before regrouping during a 97-minute lightning delay and tornado watch. But the Tar Heels were still down 7 goals with 10 minutes to go, and it appeared their undefeated run would end.
Levy always had the team practicing late-game, come-from-behind scenarios, but never anything as extreme as this. Yet the players remembered something Levy frequently told them: “Refuse to go away.”

Suddenly, graduate transfer Sam Geiersbach appeared to be magnetized to the net as she and her teammates began a ferocious rally. Geiersbach came off the bench in her lone season at UNC for a team with nine All-Americans, scoring five goals in a span of 4 minutes and 24 seconds, including the last four goals of the game. “After each goal, we looked at each other, ‘I believe in you, you’ve got this,’ ” said midfielder Ally Mastroianni ’21, who played an extra year of eligibility.

That reminded Parros of winning the 2013 championship in triple overtime. “It was a look of refusing to lose the game and knowing that we were going to do whatever it took,” she said.

After the Heels scored 8 unanswered goals in the final 9:15 (more than they’d scored in the game’s first 50 minutes) to win 15-14, the players planted their palms on the sides of their heads and dropped their jaws.

In the final game, getting past Boston College, which featured the nation’s top player and which had spoiled UNC’s perfect season a year ago on its way to a national title, would be no easier. Carolina had to scrap for every advantage to squeak by Boston College, which was playing in its fifth straight championship game.

All weekend at the Final Four, Jamie Ortega ’22, who was the first women’s lacrosse player in history to sign an NIL brand deal and who shattered the 21-year-old ACC record for career points to finish second all-time in NCAA history, was face guarded and double-teamed.
With so much talent surrounding Ortega, she never got frustrated. “I knew if our offense was together, our defense was together, the middies … were together that we would be unstoppable,” Ortega said after the championship game.

Four Tar Heels (Ortega and Mastroianni, along with Emma Trenchard ’22 and Taylor Moreno ’21, both of whom were playing in an extra year of eligibility) would be taken in the first eight picks of the professional draft after the season. All made major contributions in the Final Four victories.

At the blue Bell Tower, Levy was the last one back on the bus after the impromptu team photo. Carolina had now played in 10 of the last 13 Final Fours, firmly cementing the Tar Heels as one of the no-doubt elites in women’s lacrosse, just as Levy had planned it — at age 24.

As the bus pulled away at seven minutes past midnight, the players’ faces were still lit by the glow of their phones as they checked social media and text messages. Down South Road at the team’s facility, they exited the bus a final time and unloaded their equipment. Then the bus driver called out. They’d left something on the bus: the national championship trophy.

Levy retrieved it and took it home for a day before placing it in its rightful spot in her office, next to the program’s other two national championship trophies. The three trophies sit in front of floor-to-ceiling windows overlooking Dorrance Field.

Each trophy gets a name that starts with n-a-t for natty, as in national championship. The first two were named Natalie and Nathan. Levy could be forgiven for briefly leaving their new sister, Natasha, behind. She’d gotten so much else right.