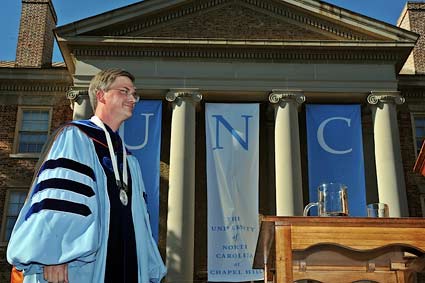 Polk Place was arrayed in every color of academia’s color palette under a Carolina blue sky Sunday as Holden Thorp ’86 was installed as UNC’s 10th chancellor. Five notable alumni also were recognized as recipients of Distinguished Alumna and Alumnus Awards.

University Day 2008 marked UNC’s 215th birthday. The day was first celebrated in 1877 to commemorate the 1793 placing of the cornerstone of Old East, the nation’s first state university building. Since 1957, the University has installed its chancellors on this day.

Thorp marked the occasion by delivering his installation address and describing his vision for the University during the public ceremony in Polk Place.

“Throughout our history,” Thorp, said, “our leaders have held true to a concept so bold, so audacious and so challenging – to aspire to global academic eminence while focusing our teaching and our service on North Carolina’s students and people.

“We’re the university of both – and: Both academic prominence and a commitment to our state.”

He added that since being selected as chancellor in May he has heard from many people throughout the state. “What I’ve heard most is an acute awareness that Carolina is about our people,” he said, “our students, faculty, staff and alumni. We all share the belief that the people of Carolina can transform the future – with our minds, with our willingness to confront challenges, and with our hopes for our state, nation and world.

“We must make Carolina the best place to teach, learn and discover.

“We just need to take care of our people. If we do that, then the students’ successes, the big ideas, the recognition, the grant dollars and the solutions to society’s greatest problems will take care of themselves.”

The text of Thorp’s address, video highlights and a slideshow of University Day are available online.

An estimated 2,750 people attended the event, according to UNC officials. Those included alumni representing almost every class since 1940 who participated in the Alumni Processional. Representatives from each class were led by past chairs/presidents of the GAA.

Carolina presented Distinguished Alumna and Alumnus Awards, created in 1971 to recognize “alumni who had distinguished themselves in a manner that brought credit to the University,” to:

Mary Wilmer “Molly” Barker ’82, founder and vision keeper of Girls on the Run International, an experiential learning program for girls ages 8 to 13. In the past decade, the program has grown to include more than 100 councils serving 40,000 girls across the U.S. and Canada. Barker, who also earned her master’s in social work from UNC in 1989, designed the program as an outlet to address “girl box issues” – restrictions placed on women that make them follow a particular path to be recognized and valued.

William Joseph Bynum Jr. ’82, CEO and president of ECD/HOPE (Enterprise Corp. of the Delta and Hope Community Credit Union), a private nonprofit community development financial institution. He helped launch the Durham-based Self Help Credit Union and served as director of programs at the N.C. Rural Center. He also has advised Presidents Clinton and George W. Bush on community development matters.

W. Lowry Caudill ’79, retired worldwide president of pharmaceutical development for Cardinal Health and co-founder, with Alfred Childers, of Magellan Laboratories. In 1998, Caudill and Childers were named Entrepreneur of the Year for North and South Carolina. Caudill was a steering committee member of the Carolina First Campaign and led the steering committee raising funds for the Carolina Physical Science Complex.

Bringing greetings during the ceremony were Hannah Gage ’75, chair of the UNC System Board of Governors; Roger Perry ’71, chair of the Board of Trustees; J.J. Raynor, student body president; Eleanor Saunders Morris ’55, chair-elect of the GAA; Tommy Griffin, chair of the Employee Forum; and Professor Joe Templeton, the faculty chair. Also speaking was Allan Gurganus, a noted North Carolina writer known for his novels, stories and essays who has known Thorp for most of his life.

Patricia Timmons-Goodson ’76, associate justice of the N.C. Supreme Court, administered the oath of office to Thorp, who received the Chancellor’s Medallion from Bowles before his speech. As the ceremony ended, the South Building bell rang 10 times in honor of the University’s 10th chancellor.

The Board of Governors unanimously elected Thorp as chancellor in May, and he started work on July 1. Thorp, 44, has rapidly progressed through several leadership posts since joining the faculty 15 years ago and previously was dean of UNC’s College of Arts and Sciences. A native of Fayetteville, he is Kenan Professor of chemistry and an award-winning teacher and researcher. Thorp was the unanimous choice of the Chancellor Search Committee.