Thorp to December Graduates: Hark the Sound of the Beatles 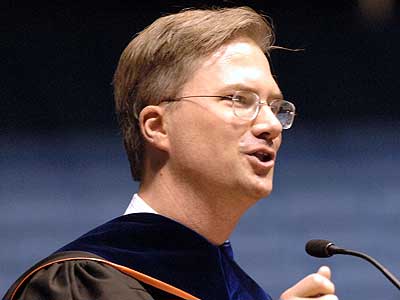 In October, shortly after it was announced that he would deliver this year’s December Commencement address, Professor Holden Thorp ’86 was asked if he intended to play a musical instrument as part of his message to UNC’s newest alumni.

“No, Bland [Simpson ’70] already did that,” referring to the English professor’s remarks, self-accompanied by piano, at a winter Commencement a few years earlier.

“You’re smart,” Thorp told the new graduates. “To your families who have come here today to support you, this may come as a huge shock. But now, you have a completed transcript to show them, and who knows, in a few weeks we may even mail you a diploma.

“Google has legs,” he observed. “Facebook has legs. Bill Gates didn’t invent DOS, he bought it for $50,000. But Microsoft still sorta has legs. And legs are important. I know about this. I see lots of great ideas from brilliant people that never go anywhere. Since you’re smart, you might actually have a great idea sometime soon. Don’t look so surprised that I’m saying this. If you have a great idea, I encourage you to do something with it.

Since I’m a musician,” he said, “when I need an example of an idea with legs, I go right to the Beatles. Now for the students in the audience, the Beatles were a moderately successful rock group in the 1960s. Their music was distributed on gigantic plastic disks. You probably have a lot of these at home that – for some unexplainable reason – your dad refuses to throw out.

“What could be easier or more fun than being a Beatle? What does a Beatle do all day? Play rock and roll. Grow hair. And run away from screaming female admirers – or not.”

His message: The Beatles finished 59 songs before they made the first hit. It can take years of hard work to become an overnight success.

“People who write 59 songs while working 12 hours a day don’t just like writing songs,” he said. “They love writing songs; they’re passionate in their need to write songs. Ideas need people with passion, and that passion cannot be faked.”

Thorp, chair of UNC’s chemistry department, has a long had a passion for music, growing up in Fayetteville and being caught up in Beatlemania in the 1960s. He still plays jazz bass and keyboard.

But the Kenan professor of chemistry also has a notable history of service.

Thorp directed the Morehead Planetarium and Science Center (2001-05) and is faculty director of fundraising for the Carolina Physical Science Complex, a $205 million facility that is the largest construction project in the University’s history. In 2002, he was recognized by the UNC General Alumni Association with its Distinguished Young Alumnus Award.

Before the address, Thorp said he planned to draw connections between science and other interests and to convey the importance of human factors in innovation.

“Success in anything, including science, requires an understanding of the human element,” he said.

“I’ll try to connect how innovation arises in multiple fields to try to get people to see how originality and creativity are common themes underlying advances in disparate disciplines.”

As director of the Morehead Center, Thorp expanded the original emphasis of the planetarium to encompass science education in new areas. He also established momentum for the Morehead Center’s first major renovation since its construction in 1947.

Thorp has won more than a dozen teaching- and research-related honors, including the Tanner Award for Excellence in Undergraduate Teaching, the Philip and Ruth Hettleman Prize for Artistic and Scholarly Achievement, the David and Lucile Packard Fellowship in Science and Engineering, the Alfred P. Sloan Fellowship and the Camille Dreyfus Teacher-Scholar Award. In 2002, he was named an honorary member of the Order of the Golden Fleece, the campus’s oldest honorary society.

Thorp holds 18 U.S. patents and has published more than 130 academic papers. He writes a column for Wake County Physician magazine and has written opinion editorials for The News & Observer and The New York Times.

Thorp has been on several University committees, boards or task forces over the course of the past decade. He is on the Morehead Scholarship central selection committee; the Chancellor’s Advisory Committee; the Faculty Working Group for the Performing Arts; and he is leading an effort to create a minor in scientific entrepreneurship as part of the Carolina Entrepreneurial Initiative, a campuswide effort designed to help UNC students, faculty and staff learn to create new ventures of all kinds.

After graduating from UNC with highest honors in chemistry in 1986, he went on to receive his doctorate from the California Institute of Technology in 1989. He joined the UNC faculty in 1993 as assistant professor of chemistry.