Thousands, Around the World and on Campus, Mourn Three Deaths 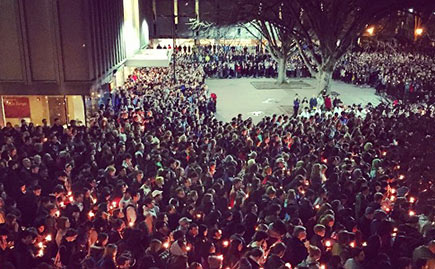 The Feb. 11 vigil at the Pit. Photo by Austin Root

Clinics run by UNC dental students were operating on a limited basis on Thursday, Feb. 12. A lot of students needed to attend a funeral.

As Carolina wore heavy hearts over the Feb. 7 death of Dean Smith, the burden grew by midweek as three students — one studying dentistry at UNC and his new wife and her sister, all with ties to N.C. State — were slain at a Chapel Hill condominium on the eastern edge of town.

Police said the three were shot dead by a neighbor who had been livid about parking and noise issues. Deah Shaddy Barakat, 23, had been preparing to embark on a trip to Turkey to take dental supplies to Syrian refugee children who otherwise wouldn’t have them; Yusor Mohammad Abu-Salha, 21, Barakat’s wife of less than two months, graduated from N.C. State and was planning to enter dental school at Carolina in the fall; and Abu-Salha’s sister, Razan Mohammad Abu-Salha, 19, was an N.C. State undergraduate.

The three were of the Muslim faith, and the incident became a vivid illustration of social media’s response to suspicion of a hate crime. Details of the crime — and speculation about the motive — gained international attention quickly. Mohammad Abu-Salha, Yusor’s father, proclaimed it a hate crime, saying the suspect had harassed the three repeatedly.

The FBI is assisting the Chapel Hill police, and also has opened its own inquiry “to determine whether or not any federal laws were violated related to the case,” according to an FBI news release.

Even as law enforcement authorities began to probe that angle, other neighbors in the Finley Forest complex, just east of UNC’s Friday Center for Continuing Education, said that Craig Stephen Hicks, 46, had hassled multiple people over their right to parking places. Resident Samantha Maness said that Hicks had “equal opportunity anger” toward his neighbors and that some of them had held a meeting last year to discuss their concerns over his behavior.

The father of the two slain women said Hicks had previously confronted Abu-Salha while wearing a gun on his hip.

Hicks turned himself in to police after the shootings, which took place just before 5 p.m. in Barakat’s and Yusor Mohammad Abu-Salha’s home. He has been charged with three counts of first-degree murder and is being held without bail.

Thousands of students and others gathered around a candlelit Pit on Wednesday night to grieve and to try to understand.

“These were students who wanted nothing more than to change the world, who basically thought the most important thing in life was helping people that were less fortunate than they were,” said Chancellor Carol L. Folt, who on Thursday also was among thousands of mourners at a funeral service for the three in Raleigh. “And that is, of course, where we’re drawing our strength right now.”

The federal prosecutor for the district that includes Chapel Hill and Durham, Ripley Rand ’90 (’95 JD), told The News & Observer that he did not think the murders were a targeted hate crime against Muslims. The crime occurred in the Chapel Hill part of Durham County — but Hicks appeared in District Court in Durham on Wednesday. A probable cause hearing is scheduled for March 4.

Barakat had made a YouTube video in which he described plans for the Turkey trip he and other dental students were to take next summer.

Wearing a “Carolina Dentistry” T-shirt, he said on the video: “These kids don’t have access to the same health care as us, and their prolonged pain can easily be taken care of with the work that we do, but we need the proper funding. So let’s relieve their pain. If you want to make a difference in the life of a child most in need, then I urge you to take advantage of this opportunity.”