Five alumni have been presented with the William Richardson Davie Award, the highest honor bestowed by UNC’s Board of Trustees.

Established by the trustees in 1984, the Davie Award is named for the Revolutionary War hero who is considered the father of the University. It recognizes extraordinary service to the University or society.

Chancellor Holden Thorp ’86 and the trustees honored the recipients at The Carolina Inn on Wednesday night. 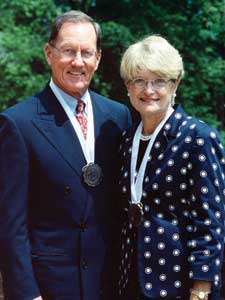 Both natives of North Carolina, the Brysons entered UNC the same year, studied pharmacy and graduated in 1960. Vaughn Bryson worked at Eli Lilly & Co. for 32 years, serving as its president and CEO from 1991 to 1993. Nancy Bryson has served on the Arts and Sciences Foundation board, the Friends of the Library board and the UNC Board of Visitors. He has been on the pharmacy school Dean’s Advisory Board and is now on the board of the UNC General Alumni Association. They both served on the Carolina First Campaign Steering Committee and in 2004 received the GAA’s Distinguished Service Medal.

The Brysons have given generously to Carolina in several areas. They made the first major gift toward the new music library building, spurred the funding of a pharmacy professorship endowment in honor of George Cocolas, one of their favorite professors, and created excellence endowments for the deans of the pharmacy and public health schools. They funded a baseball scholarship and created an endowment for baseball, the first for a sport at UNC. Vaughn Bryson also has been the visionary behind the renovation of the baseball stadium. Once work is completed, Tar Heel baseball teams will play home games on Bryson Field at Boshamer Stadium. 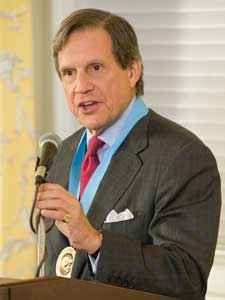 Grauer, who earned his degree in English, has spent his career in the financial industry. He worked at the investment banks Donaldson, Lufkin and Jenrette and Credit Suisse First Boston. Then he co-founded DLJ Merchant Banking Partners and DLJ Investment Partners. In 2002, he took over leadership of Bloomberg LP, the worldwide information-services and media company. He had been on the company’s board of directors since 1996 and its chairman since 2001, succeeding company founder Michael R. Bloomberg. Grauer also is lead director of health care services company DaVita.

Grauer has served on the boards of more than 25 public and private companies. At Carolina, he has stewarded the honors program in the College of Arts and Sciences, whose external advisory board he has led since 1997 and where an endowed professorship is named in his honor. In addition to contributing his time and leadership, Grauer and his wife, Laurie, have made generous monetary gifts to Carolina. They support the Carolina Excellence Fund, the European Study Center at Winston House, the James M. Johnston Center for Undergraduate Excellence and the men’s lacrosse team, among other areas. 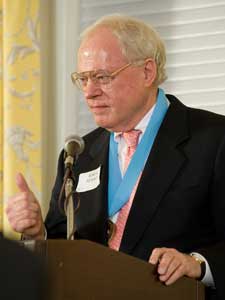 Massey, known as an active force for the University, earned a degree in business administration and, after graduation, went to work for C. Knox Massey & Associates, the Durham advertising firm founded in 1930 by his father. Massey moved to Atlanta in 1964 to merge the firm with Atlanta-based agency Tucker Wayne & Co. As that firm grew to be the largest in the Southeast, Massey eventually served as president, chairman and CEO before retiring in 2000.

At Carolina, he has served on numerous boards, including the Carolina First Campaign Steering Committee, the GAA Board of Directors, the UNC Board of Visitors, the Arts and Sciences Foundation board and the Institute for the Arts and Humanities external advisory board. His wife, Mary Ann, also graduated from the University in 1959.

The Masseys have given generously to their alma mater. In 1983, they joined with Van ’54 and Kay Weatherspoon, who is Massey’s sister, to honor Knox Massey Sr. ’25 with one of the early professorships at Kenan-Flagler Business School. They, along with the Weatherspoons and Knox Massey Sr., created the Massey-Weatherspoon Fund. This fund supports the C. Knox Massey Distinguished Service Awards, recognizing “unusual, meritorious or superior contributions” by University employees, and the Carolina Seminars, which bring together faculty members from Carolina and other area universities and institutes to discuss a variety of issues. 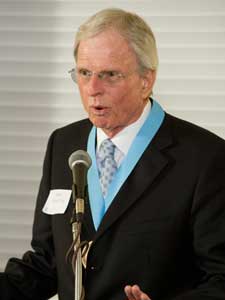 Beginning with Patrick Henry Winston in 1844, six generations of Winston’s family have been Carolina students and leaders. Among them were George Tayloe Winston, who served as president of the University from 1891 to 1896, and Winston’s uncle, also named James and a 1904 UNC graduate, who was the first Carolina student to win a Rhodes Scholarship.

Though many Winstons graduated from Carolina, the connection to his family was made ever stronger in 2007, when Winston provided the leadership gift to name the European Study Center in London. The UNC European Study Center in Winston House serves faculty, students and alumni from across the University. Alumni are welcomed at the center for enrichment activities and meetings. Faculty and graduate students hold academic conferences there with European colleagues; state-of-the-art instructional technology links classes in Chapel Hill, London and other locations across the European continent.

Winston earned his degree in business administration from Carolina. He is chairman of LPMC Inc., a real estate investment firm in Jacksonville, Fla., and also is president of White Oak Land and Development Co., the developer of Summer Beach, a project of more than 1,000 residential units and the Ritz Carlton Hotel in Amelia Island, Fla. He also is president of Omega Insurance Co., a property and casualty insurance company that does business in Florida and five Southeastern states.