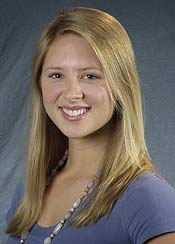 After Durham police arrested the second suspect in Eve Carson’s shooting death in mid-March, they also charged him in the slaying of a Duke University graduate student in January.

Lawrence Alvin Lovette, 17, surrendered shortly after 4 a.m. on March 13 following an extensive manhunt involving SWAT-type teams. Lovette was charged with the killing of Carson on March 5 and of Abhijit Mahato on Jan. 18. Lovette is the second person charged in the death of Mahato, who was shot in his apartment in Durham.

As with the first arrest in the Carson case, police credited tips from the public.

Demario James Atwater, 21, was charged March 12 with first-degree murder in the death of Carson. Atwater was detained by Durham police at about 5 a.m. as he left a house in Durham. Chapel Hill police acting on tips and on information they developed had alerted Durham police, who made the arrest.

On March 31, both men were indicted by an Orange County grand jury on charges of first-degree murder in Carson’s death. Both also had been on probation for prior violations. According to media reports, Atwater previously has been convicted of felony breaking and entering and possession of a firearm by a felon. The firearm conviction was in Granville County, the reports said. Lovette had been placed on probation in January following a conviction for breaking and entering, according to reports.

Curran released nothing other than the barest details at a March 12 news conference, abruptly ending the session when pressed for details of the crime.

Earlier in March, WRAL-TV reported that Atwater has a police record, dating to 2004, on charges of robbery, drug possession and resisting arrest. WRAL also reported that he was due in court in early March on a breaking and entering charge, according to court records.

Curran said police had received hundreds of tips from the public. The UNC Board of Trustees had put up a $25,000 reward for information leading to an arrest.

Carson, a senior from Athens, Ga., was found shot to death early March 5 in a quiet neighborhood about a half mile from the campus. She had been shot multiple times, police said, including a fatal shot to the head. Media reports have said that shot had been to her right temple. Police found Carson’s SUV, which apparently had been taken, on North Street not far from where she lived.

Police said there was no sign of a struggle. Curran has maintained he believed it was a random crime.

It was not known as of March 12 whether the vehicle in the bank photo was Carson’s Toyota Highlander.

Police responded to a call at about 5 a.m. March 5 from someone who had heard three or four gunshots on Davie Circle, off East Franklin Street. Carson lived at 202 Friendly Lane, several blocks to the west of the shooting location, near downtown.

Carson was a Morehead-Cain Scholar. She served as an ex officio member of the Board of Trustees and was on the committee currently searching for a successor to Chancellor James Moeser. She was majoring in political science and biology. A close acquaintance said she had accepted a job as a management consultant with McKinsey & Co.

The staff of the Morehead-Cain Foundation was shocked at the news of her death. “I’ve known Eve very well since she arrived as a freshman,” said Executive Director Chuck Lovelace ’77. “She just had tremendous energy and spirit and loved everything Carolina.”

Lovelace said Carson had been designated the Morehead-Cain’s senior speaker to welcome incoming freshman scholars on behalf of all the Morehead-Cain students. “She gave a really great speech to the freshmen. Part of it was off the cuff and a lot of fun. She challenged the students to make this a better place.”

Nelson Schwab III ’67, former chair of the Board of Trustees who also is chairing the chancellor search committee, expressed deep regret at the news of Carson’s death. “She was incredibly upbeat, a very positive person. She always saw possibilities. She would go in a dozen different directions at once to get things done.”

Schwab recalled “a vivid recollection” of Carson’s work on the search committee. During one of several campus forums, held to gather feedback on attributes the next chancellor should possess, “she rallied 50 to 75 speakers, all students, each representing a different perspective, point of view or constituency. She really did her homework; she thought through each task about how to take it to the next level. She did that all the time.”

Police said that Carson was last seen at about 1:30 a.m. Wednesday, March 5, and that she was identified at the office of the medical examiner by someone who knew her. Curran and Jeff McCracken, chief of the campus police, have been tight-lipped about the details of the shooting. Curran said a computer search using records dating to 2001 turned up no instances of violent crimes in that neighborhood.

In a message to the campus community, Moeser wrote of Carson as “a wonderful person and great friend. We are deeply saddened and numb with grief.” The news spread quickly, and stunned students, faculty and staff packed Polk Place three-fourths full in the middle of a warm afternoon the day before spring break, in a scene reminiscent of Sept. 12, 2001.

Moeser, the lone speaker at the gathering, called it a “tragedy of immense proportions” and said that while the death of any student is tragic, this one was multiplied by the large number of people Carson touched in her work. “Eve Carson personified the Carolina spirit” perhaps more than anyone he had known in eight years as chancellor, Moeser said. “She felt the pulse of this University.”

He said he had been asked to describe the essence of Carolina at last fall’s freshman camp, and after he said, “excellence with a heart,” Carson picked up the phrase and was heard using it repeatedly during the year.

Moeser said, “Let us be the University that Eve Carson envisioned.”

After moments of silence, the Bell Tower tolled Hark the Sound.

A candlelight vigil was held Thursday night in the Pit. Thousands of students turned out.

Curran called Carson a “highly regarded member of the University community,” and McCracken said it was a tragedy for all of UNC. Chapel Hill Mayor Kevin Foy said Carson was “happy, vivacious, intelligent and engaged,” saying she was a “presence in the community whose absence leaves a permanent void.”

Carson, who was 22, was elected student body president in February 2007. Her term would have ended in April. As student body president, she served ex officio on the GAA’s Board of Directors. She was a member of Phi Beta Kappa, and as a North Carolina Fellow, she was part of a four-year leadership development program for undergraduates. In the spring of her sophomore year, she studied in Havana, Cuba. She spent her summers working and volunteering in Ecuador, Egypt and Ghana as part of the Morehead Summer Enrichment program.

She was involved in Nourish International, a hunger relief organization started by UNC students in 2002. She served as freshman volunteer coordinator and later as co-chair for the group.

She served as co-president of the Honors Program Student Executive Board and as a member of the Committee on Scholarships, Awards and Student Aide; the Academic Advising Program; and the Chancellor’s committee for University Teaching Awards.

According to a published biography, Carson was interested in teaching and working with children. In 2006, she taught science at Frank Porter Graham Elementary School in Chapel Hill as part of UNC’s INSPIRE program, whose mission is to encourage young students to pursue science as an interest. In her junior year, Carson was a tutor at Githens Middle School in Durham. She also was an assistant coach in Girls on the Run of the Triangle, a character development program for girls ages 8-12 that uses running to teach values and a sense of self. She also was student body president of her high school, Clarke Central, in Athens.