Unbeaten and Champion — the Fifth for Field Hockey

The UNC field hockey team won its fifth national championship in November with a 3-0 victory over Penn State at College Park, Md. The team finished its season undefeated with 24 wins. 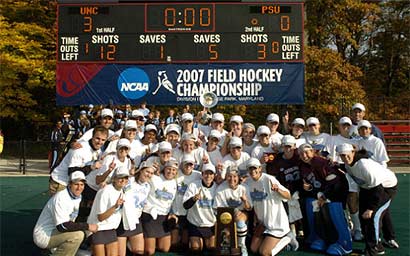 Karen Shelton, who has coached the Heels since 1981, has steered the team to all five of its national titles.

“I never get used to it,” Shelton said. “It’s always a thrill. This year was very sweet.”

Shelton said this year’s team was remarkable for its sheer amount of talent. Outscoring their opponents 102-14, 11 players on the team scored at least three times during the season. Seven seniors — co-captains Rachel Dawson and Laree Beans, along with Jesse Gey, Alli Tanner, Xan Funk, Heather Kendell and Liz Morris — led the charge. They accounted for more than half the goals this year.

The team is the fifth Division I field hockey team and second Carolina team to go undefeated. The team boasts 16 shutouts for the season — a UNC record. In the championship game, Carolina held Penn State to just three shots.

“I think our depth really set us apart,” Shelton said. “We had a very strong senior class. The leadership we had was fantastic.”

The challenge for the players this season, because of their outright domination in the majority of games (all but three were won by more than one goal), was keeping mentally sharp. Shelton said her staff worked to make sure players didn’t take winning for granted, especially during their nine-game shutout streak in the middle of the regular season.

“The trick was to keep the team focused and in the present and not too full of themselves,” Shelton said. “But the team was so mature and so well-led. And the depth created kind of a competitive environment — if you’re not doing your job, there’s someone else who can step in and do it.”

Dawson, whom Shelton calls the best player to ever play field hockey at UNC, was named to the Division I All-America team along with Gey, Beans and freshman Katelyn Falgowski. Falgowski, third on the team in scoring, led the nation with her 21 assists and was named the ACC Freshman of the Year.

“I still see us being one of the stronger teams out there,” Shelton said. “The core of young players that we have is very strong. They’ve had a taste of winning and a taste of this national success, and winning becomes a habit.”