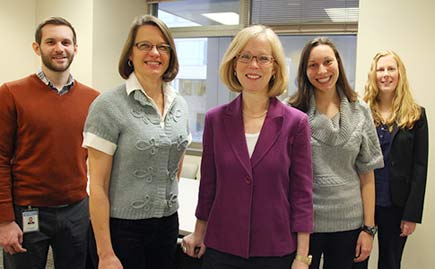 Cynthia Bulik, a Distinguished Professor of eating disorders at UNC, has been awarded up to $7.2 million to conduct the largest and most rigorous genetic initiative in eating disorders ever undertaken.

Funded by the Klarman Family Foundation, the Anorexia Nervosa Genetics Initiative, or ANGI, will collect clinical information and blood samples from more than 8,000 individuals, both women and men, who have had anorexia nervosa at any point in their lives and those without an eating disorder in an effort to detect genes that contribute to this potentially life-threatening illness.

“Genomewide association studies have been enormously successful in identifying genes that contribute to a range of medical and psychiatric conditions. These discoveries have opened up new avenues of understanding of both cause and cure,” Bulik said. “Once we identify genetic associations in ANGI, we will use the information to develop better strategies to detect, treat and prevent anorexia nervosa.

“If our project is successful, it will change the life course of millions of individuals with anorexia and their families.”

Each person’s complete set of DNA, or genome, will be purified from a blood sample, placed on tiny chips and scanned on automated laboratory machines. The machines quickly survey each participant’s genome for strategically selected markers of genetic variation, which are called single nucleotide polymorphisms, or SNPs. If certain genetic variations are found to be significantly more frequent in people with anorexia compared with people without anorexia, the variations are said to be associated with the disease. The associated genetic variations can serve as powerful pointers to the region of the human genome where the disease-causing problem resides.

Bulik, director of UNC’s Center of Excellence for Eating Disorders, is the lead principal investigator for ANGI, which also includes researchers from the Karolinska Institutet in Stockholm, Sweden; the Queensland Institute of Medical Research in Brisbane, Australia; and Aarhus University in Aarhus, Denmark.

ANGI was established in 2013 by the Klarman Family Foundation, a private foundation based in Boston. The foundation used a competitive, peer-review process to select Bulik’s research proposal.

Anyone interested in participating in ANGI or seeking additional information can visit www.unceatingdisorders.org/angi or the ANGI Facebook page or call (919) 966-3065.