A monoclonal antibody, now moving through clinical trials that were designed in part by UNC scientists, has been found to significantly — and at a scope that surprised researchers — reduce the risk of contracting... 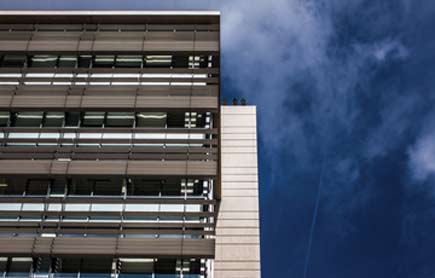 Marsico Hall — one of the largest buildings on the UNC campus — is the new home for basic and translational research across several disciplines and features state-of-the-art imaging equipment that is expected to fundamentally advance knowledge of cancer and many other complex diseases.

The University dedicated the building, on Mason Farm Road near Lineberger Comprehensive Cancer Center and other health-related research facilities, on March 27.

The nine-story, 340,000-square-foot building — third largest on the campus behind Davis Library and the Genetic Medicine Building — provides world-class imaging equipment, including a hybrid MRI/PET whole body scanner, a 7 Tesla MRI whole body scanner and a cyclotron. UNC and Massachusetts General Hospital (in affiliation with Harvard University) are currently the only two academic medical centers in the country that have these three imaging devices in one location. Together, each device optimizes the capabilities of the others, making these devices some of the most powerful diagnostic imaging tools in the world.

Marsico Hall houses an array of the UNC School of Medicine’s and the Eshelman School of Pharmacy’s research programs. The building includes the Marsico Lung Institute, the Biomedical Research Imaging Center as well as researchers from Lineberger and from nanomedicine, microbiology and immunology, and pharmaco-engineering.

It is named for Thomas F. Marsico of Denver, chair and chief executive officer of Marsico Capital Management and father of two UNC alumni, for his lifetime contributions to the School of Medicine.

Funds for the building were provided through state appropriations — a total project cost of $245 million, with the N.C. General Assembly providing $243.5 million to construct the building and UNC providing the remaining $1.5 million. As the only new public building funded by the state in 2009, Marsico is expected to have a significant impact on North Carolina’s economy and UNC’s commitment to scientific discovery.

“The opening of Marsico Hall brings with it exceptional and expanded opportunities for continued collaboration between the schools of medicine and pharmacy at UNC,” said Robert Blouin, dean of the pharmacy school. “Major advances in nanomedicine, drug discovery and delivery, and biomedical imaging are within our reach. The environment, technology, and people within Marsico Hall will make these advances possible. The discoveries made here will drive the economy of the state and improve the health of North Carolinians and people around the world.”