The structure of an entire HIV genome has been decoded for the first time by researchers at UNC. The results have widespread implications for understanding the strategies that viruses, including the one that causes AIDS, use to infect humans.

The study, the cover story in the Aug. 6 issue of the journal Nature, also opens the door for further research that could accelerate the development of antiviral drugs. 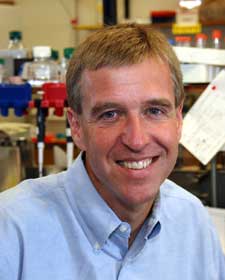 HIV – like the viruses that cause influenza, hepatitis C and polio – carries its genetic information as single-stranded RNA rather than double-stranded DNA. The information encoded in DNA is almost entirely in the sequence of its building blocks, which are called nucleotides. But the information encoded in RNA is more complex; RNA is able to fold into intricate patterns and structures. These structures are created when the ribbon-like RNA genome folds back on itself to make three-dimensional objects.

Kevin Weeks, a UNC professor of chemistry who led the study, said that prior to this new work researchers had modeled only small regions of the HIV RNA genome. The HIV RNA genome is very large, composed of two strands of nearly 10,000 nucleotides each.

Weeks, who is also a member of the UNC Lineberger Comprehensive Cancer Center, and Joseph M. Watts, a chemistry postdoctoral fellow supported by the Lineberger Center, used technology developed by Weeks’ lab to analyze the architecture of HIV genomes isolated from infectious cultures containing trillions of viral particles that were grown by Robert Gorelick and Julian Bess of the National Cancer Institute.

They then teamed up with other UNC researchers for further analysis: Christopher Leonard ’99 in the chemistry department; Kristen Dang from biomedical engineering; Ron Swanstrom, a professor of microbiology and immunology; and Christina Burch, an associate professor of biology. They found that the RNA structures influence multiple steps in the HIV infectivity cycle.

“There is so much structure in the HIV RNA genome that it almost certainly plays a previously unappreciated role in the expression of the genetic code,” Weeks said.

Swanstrom and Weeks note that the study is the key to unlocking additional roles of RNA genomes that are important to the lifecycle of these viruses in future investigations.

“One approach is to change the RNA sequence and see if the virus notices,” Swanstrom said. “If it doesn’t grow as well when you disrupt the virus with mutations, then you know you’ve mutated or affected something that was important to the virus.”

Weeks added: “We are also beginning to understand tricks the genome uses to help the virus escape detection by the human host.”