For years, singer, guitarist and drummer Clark Blomquist has played at least a couple of gigs a week at local music venues, filling in with shifts at two Carrboro restaurants. But in mid-March, as stay-at-home...

Being a family-owned restaurant can have its advantages in trying times. For example, say you signed a seven-year lease on a West Franklin Street space in the most expensive part of Chapel Hill — just...

Shawn Stokes opened the new Carrboro branch of Luna Rotisserie at 11 on a Saturday morning in mid-February. He strung a banner out front of what for years had been home to the Milltown restaurant.... 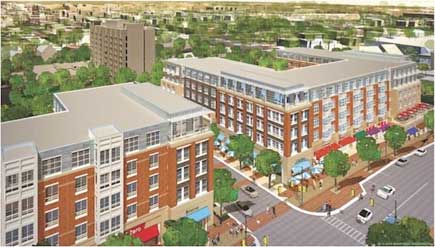 University Square — the 12-acre site known for Granville Towers, several restaurants and assorted shops — has received approval from the Chapel Hill Town Council for its planned transformation into an urban-style mix of retail, offices and residences, including hundreds of additional parking spaces.

The council’s unanimous vote for the project, known as 123 West Franklin, cleared the way for a sweeping transformation of the 1960s-era shopping center into a modern mixed-use development with office space, apartments, shops, restaurants, public space and a parking deck.

Cousins Properties of Atlanta created the design and presented the plan to the council, which acted on Feb. 11. The land is owned by Chapel Hill Foundation Real Estate Holdings, a University-affiliated private nonprofit corporation.

The $80 million to $100 million development will offer 300 one- and two-bedroom apartments; 210,000 square feet of office space; and 75,000 square feet of retail space, including room for an urban grocer. For the foreseeable future, Granville Towers will continue to operate as a
residence for some 1,300 students.

“This is an exciting night for the University,” said Chancellor Holden Thorp ’86, who introduced the presentation. “We are behind a lot of our peers in offering young faculty and staff and retired professors a place to live to be close to campus.”

University Square has been the longtime home to a number of enterprises well-known to many alumni, including restaurants Time Out, 35 Chinese and Butternut Squash; Ken’s Quickie Mart; Chapel Hill Barber Shop; Fine Feathers; and Peacock Alley. Some of those proprietors are signing new leases elsewhere in town.

The plan’s green space would be larger than the Weaver Street Market lawn, and the potential of hundreds of additional downtown parking spaces, which would be available to the public at nights and on weekends, created the most discussion among council members and Mayor Mark Kleinschmidt ’92. They expressed concern that promises made by Cousins about allowing the public to park in the deck or use the open space might not be honored by the next company to lease the property.

They also questioned whether the $90,000 being offered as a donation to the town’s affordable housing fund — a payment not required for rental property — was adequate compared to payments given by other recent applicants.

After a brief huddle with Cousins representatives, Thorp came back to the podium to seal the deal. He offered a payment-in-lieu totaling $250,000 ($50,000 a year for five years to be paid by the project) in his role as a board member of Chapel Hill Foundation Real Estate Holdings. The new figure was accepted by the council.

Supporters of the project outnumbered its detractors at the public hearing preceding the vote. Rosemary Waldorf ’73 recalled that, during her time as mayor in the 1990s, “this is the sort of mixed-use project that we dreamed about.”

Even a potential competitor with the new project spoke up in favor of it. “This development is just an absolute home run. It’s a great step forward,” said Peter deLeon, general manager of University Mall.