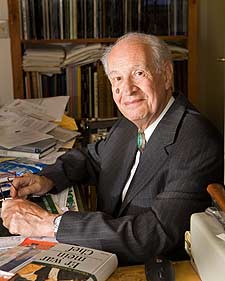 The Pritzker Military Library Literature Award recognizes a living author for a body of work that has profoundly enriched the public’s understanding of American military history. The award, presented by the Chicago-based Tawani Foundation, includes a $100,000 honorarium.

“Dr. Weinberg is truly a gifted writer of military history who has devoted his skills and talent to produce A World at Arms, perhaps the finest study of World War II ever attempted by a single scholar,” said James N. Pritzker, founder of the Pritzker Military Library in Chicago and a retired Army colonel.

Weinberg, who came to UNC in 1974, received his master’s degree and doctorate in history from the University of Chicago.

The Carolina Alumni Review profiled Weinberg in its September/October 1995 issue. This excerpt from that report, titled “Personal History,” details Weinberg’s early years and the dramatic story inherent in the life of a Jewish child at that moment in history:

“He was born in Hanover [Germany] on Jan. 1, 1928. His father, who had served in the army of the German Empire in 1914, lost his job in the ministry of finance after Hitler became chancellor and Jews were fired from government positions. As a boy, Weinberg was banned from public swimming pools, movie houses and many restaurants and stores. His family’s car was sold when Jews were forbidden to own automobiles. …

“By 1938 his parents had applied for exit visas to leave Germany for the United States. ‘A quota system was in effect, and we were waiting to get our number,’ Weinberg said. In November came Kristallnacht, ‘the night of broken glass,’ when Jewish homes and businesses across Germany were looted and burned.

“‘Our synagogue was burned, and my father was arrested,’ he remembered. ‘Many people were deported to the camps. We didn’t know what would happen.’ A gentile friend managed to gain his father’s release. …

“Weinberg’s parents were permitted to go to England in spring 1939. In 1940 his father was interned as an enemy alien while the family waited to leave for the United States. In September his father was released for the journey to America. ‘We left London during an air raid,’ Weinberg remembered. ‘The war had begun, and the city was being bombed.’

“The family took a Cunard liner from Glasgow to New York. ‘It was very dangerous, and very few passenger ships were still running. Our ship zigzagged all the way to avoid the U-boats,’ he recalled. ‘We had to wear life belts day and night. We had taken our chances with bombs in London, and now we faced torpedoes in the Atlantic.’

“Weinberg’s great-uncle Franz Hirschland sponsored the family’s emigration to the United States. ‘He had made a fortune patenting metallurgical processes, and he used much of his fortune to bring relatives, friends and others out of Germany,’ Weinberg explained. ‘It would be a very interesting story to track down those whom he helped to escape. He was a remarkable gentleman.'”

Weinberg later graduated from Albany High School in Albany, N.Y., and enrolled in the New York State College for Teachers. He later served the U.S. Army in occupied Japan, teaching history and government as well as literacy classes to American soldiers.

The 2009 award screening committee described Weinberg’s work as “achieving the all-too-rare quality of being both encyclopedic and highly readable … monumental, comprehensive, magisterial, indispensable.”

Weinberg will receive the award on Oct. 24 at the library’s annual gala in Chicago.