Time’s running out on how UNC will keep its financial promise to low-income students. by...

The UNC System Board of Governors voted last week to extend for a sixth consecutive...

The University announced in January that it had surpassed the $4.25 billion goal for its campuswide fundraising drive almost a year before the campaign’s deadline.

The Campaign for Carolina, launched in October 2017 and scheduled to close this December, received funding from the state of North Carolina and donations from individuals and institutions. Carolina is the eighth public university in the U.S. — and the only one in the South — to surpass $4 billion in a single campaign. The other universities to reach that milestone are University of California-San Francisco, UC-Berkeley, Washington, Michigan, UCLA, Texas A&M and Minnesota.

The Review met with Vice Chancellor for Development David S. Routh ’82 in February to discuss how the University met its goal despite the COVID-19 pandemic and other challenges — and what’s ahead. The following is an edited version.

Take us back to the beginning of the campaign. How was the $4.25 billion determined? 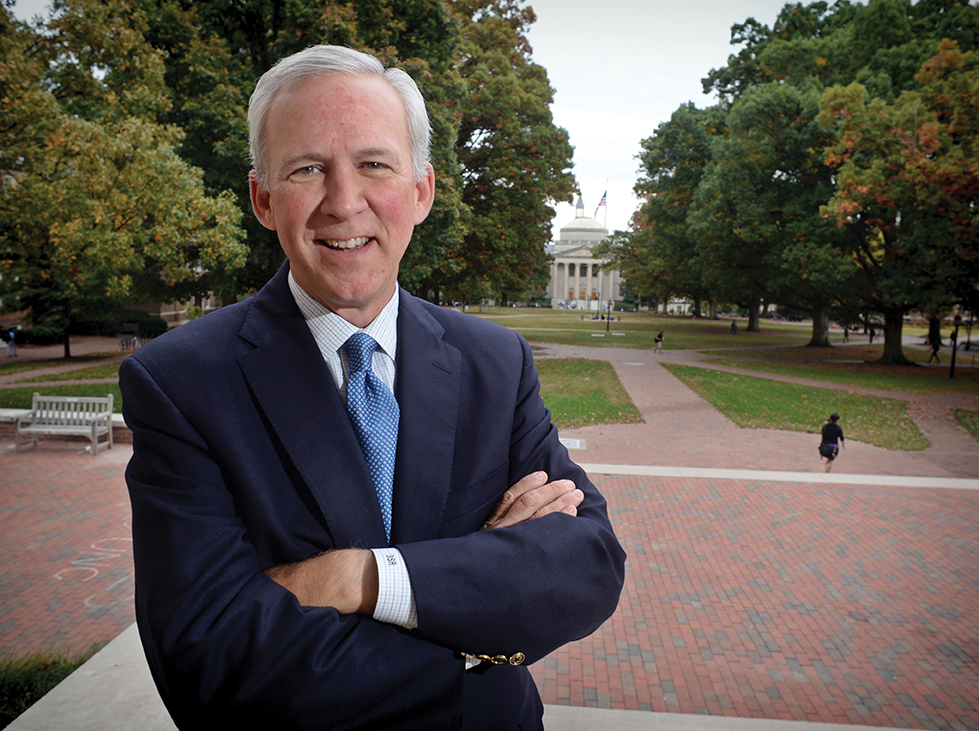 We finished the last campaign in 2008. I was hired in October 2013 with the mandate to get a campaign planned, structured and in the market as soon as we possibly could. That’s a complicated planning task when you have a university as big as this one and as decentralized as it is. We started with conversations with deans about what they needed strategically in their schools. Outside the deans’ community, there were vice chancellors and student affairs, or any of the other vice chancellor units who needed to identify priorities.

We had conversations in focus groups with volunteers, alumni, donors, academic leadership, faculty and students trying to figure out what is the authentic Carolina we need to be talking about to get people inspired to make a gift to the campaign.

Then in early 2014, [former federal prosecutor] Kenneth Wainstein was hired to do an independent investigation of [irregular classes] at the University. So before we could get the campaign planned, we had a distraction right off the bat. But we got it planned. And when you add up all the needs, you really come to a big number, $4.25 billion. That’s a very big number. It’s almost too big to get your arms around. So what you need to do is break it down to how can a donor make a difference at Carolina for a student, faculty member, a program, an innovation and disease area that they care about.

You said you started the planning with a distraction. During the subsequent years you faced other headwinds, including a pandemic. How did your team manage through those?

One of the questions we tried to focus the Carolina Community on early in the campaign is what are you for? What I think that did is kept people focused on what they were happy about, what they were excited about, what they were positive about. And this is a general philosophy I believe; our whole world around us has gotten really good at talking about what it’s against, and what it’s unhappy about. If we can keep people focused at Carolina about what they’re inspired by a lot of times the giving takes care of itself.

The University pointed out Carolina is one of eight schools that has raised more than $4 billion in a single campaign and the only one in the South. Why is that important?

I think what it does for Carolina is gives us as a community the confidence that we can be in that better tier of private support. It’s powerful for Carolina’s aspirations to continue to be high and believe it can get there. This campaign is not about $4.25 billion, or any number. It’s honestly about the impact the dollars have on the things that they’re given to.

In August we have a reception of all the newly selected Carolina Covenant scholars. That’s our leading low-income family scholarship program that guarantees that students from families with less than two times the federal poverty limit in income can come here and graduate debt free. In any one year, we might have 550 to 600 students who get into Carolina coming from families with average family income of roughly $30,000. They have grit; they’ve overcome things. To me that is part of the magic of Carolina. You have kids from the smallest towns, and from very low-income families, coming here, and they’re rooming with families from Manhattan, Silicon Valley, Miami and Dallas and the wealthy families of North Carolina. Everybody learns in that environment.

There are some areas that have yet to hit their targets, one being student support. What are your plans for meeting these goals?

When we were planning this campaign, we decided if this could be the one area of the campaign where we have a billion-dollar goal, wouldn’t it say something about who we are? A lot of institutions have created $1 billion student-support goals and haven’t made it. We’re determined we’re going make it.

We believe we have some donors that might say, “I’ve done my gift for my school, but I’d like to add on a scholarship gift.” Part of the joy of scholarship giving is you tend to know the student who’s in your scholarship, and you’re the one who helped provide the resources to give them the opportunities they have. That’s an extremely joyous version of giving.

The majority of giving came from alumni. What message do you have for them?

I think to our fellow alumni I would say, and I think I speak for most of us, my life has been enriched so much because of the Carolina education I received, the things I love to do now, the things I ended up doing in my career. Think about the thing at Carolina you love and have fun with your giving. This has been the philosophy we’ve taken on this development team from day one. Our job is not to go talk somebody into giving to something they don’t care about. Our job is to take the intersection of something our donors are passionate about and something Carolina really needs. And if you get at that intersection, people are so happy to give to the thing they care about. And it’s something Carolina really needs.