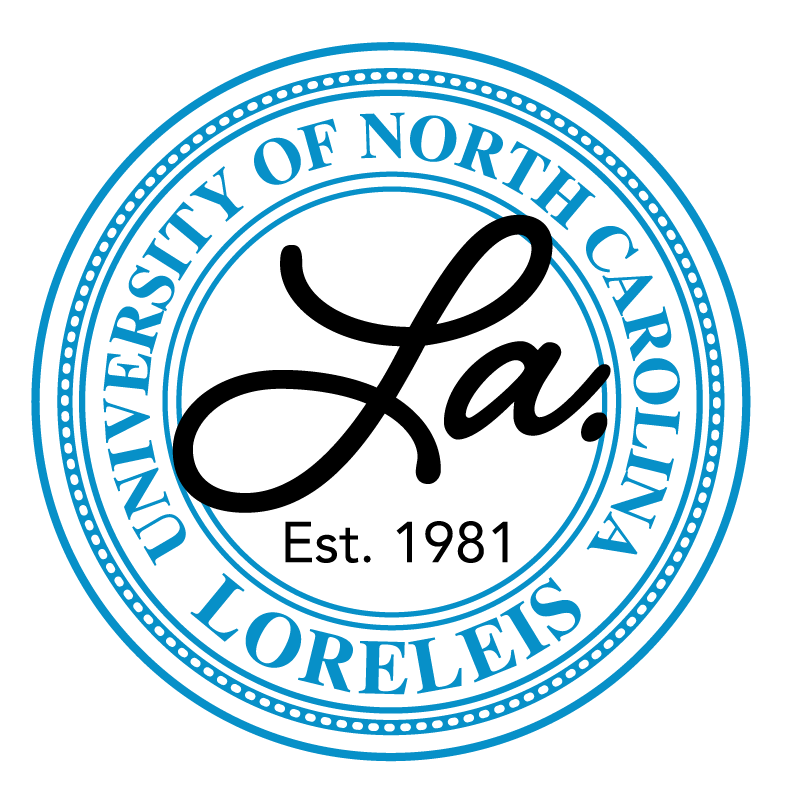 The Loreleis were founded in 1981 to provide female singers without formal musical training a venue to show off their talents. The eight original Loreleis had an informal start with their first performance at Morehead Planetarium and four total songs in their repertoire. After a rocky start, the group disbanded but was revived by Sarah “Rah” Bickley in 1984. In 1986, the Loreleis signature all-black dress came into being. The Loreleis also started adding percussion into some of their songs and singing contemporary music – all thanks to Margaret Moore. The La-Lady was created as the cover decoration for one of the concert programs in 1997 and then transformed into the group’s mascot. In 1990, the first tape, Lorelei, was recorded in the spring and released in the summer. It was recorded in Daniel Ingram’s basement with two floor mics. Fall tour commenced in 1990, also affectionately called the “2,600 miles in four days” tour. The second cassette, Siren Song, was recorded on Spring Tour of 1991. Our first fall jam was in 1991 and was our first ever two-night jam. On the Rocks, our second cassette, was produced and won CASA’s Contemporary A Cappella Recording Awards in the female collegiate group category for Best Album, Best Song (Tangled) and Best Arrangement (Road to Nowhere by Nancy Ingram). In 1993, Stranded, our first compact disc, was produced. In 1995, “Save the Best for Last” off of Stranded, became a part of CASA’s first Best of College A Capella compact disc. Smitty’s Place was the second compact disc produced in January of 1996.

The Loreleis also competed in CASA’s First National Competition of College A Capella as the only female group and won. The morning after, as national champs, the Loreleis performed En Vogues’ Hold on to Your Love on CBS’s Good Morning America. In 1996, Loreleis were included on a BOCA album and also appeared on NBC’s Today Show. The following year, our first annual Loralumn reunion took place over the weekend of Fall Jam in Chapel Hill. Our third compact disc was also released in the Spring and was named 116 Chauncey Street. The Loreleis went international in the spring of 2000, touring Paris, France. We were also invited to sing with vocal legend Bobby McFerrin. In November 2003, we won first place in the first ever SoJam, an a cappella festival featuring the biggest names in collegiate and professional a cappella. In January, 2004, we were featured on CBS News Sunday Morning in a special about the expansion of college a cappella. On April 2, we released our newest CD, titled Take a Big Whiff. On October 13, 2004, Loreleis sang the National Anthem at New York Yankees Stadium during the second game of the American League Championship Series. We also performed in a short concert for Yankees owner George Steinbrenner and actor and comedian Billy Crystal. While in New York City, they visited Trump Towers and serenaded Donald Trump.

In 2005, Loreleis won first place in the ICCA South Region Divisional at Florida State University. On Wednesday, Feb. 25, 2009, the Loreleis opened for Ben Folds at the Durham Performing Art Center. In 2010, Loreleis released an album titled Philophony, which won the Contemporary A Cappella Recording Award for Best Female Collegiate Album. On Feb. 5, 2011, the Loreleis earned second place at the Southern Quarterfinals of the ICCAs at UGA. In 2013, the group was nominated for six CARA awards for A Kick and a Wallop, our album released in 2012. In the spring of 2014, the group opened for Jay Leno at the Durham Performing Arts Center and released the album Burn at the spring concert. In the spring of 2016, we released our most recent album, Sincerely, which has been nominated for three CARAs, including best female collegiate album. In December 2016, the Loreleis sang Christmas carols in the White House to bring holiday spirit to our nation’s capital. Earlier this spring, we opened for Jay Leno for the second time at the Durham Performing Arts Center and are celebrating our 35th anniversary as a group this year. We have continued to travel nationally and internationally every year for competitions, performances, and to visit other university a cappella groups.