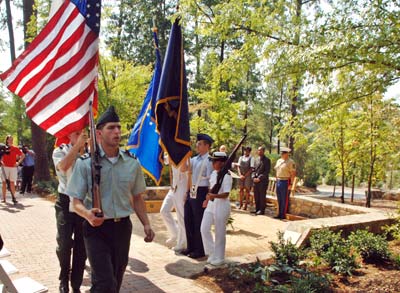 The color guard from UNC’s ROTC units leaves the 9/11 Memorial Garden at the close of the dedication ceremony on Tuesday. The rock wall and surrounding plantings define the garden. (Photo by Dan Sears ’75)

They were, in the words of class Treasurer T.J. Abrams ’05, “already experiencing change and uncertainty.”

They were three weeks into their freshman year when the attacks in New York, Washington and Pennsylvania suddenly replaced their studies and new social lives with a stunned silence that gave way to frightening questions about the future.

On the sixth anniversary of 9/11 the class of ’05 unveiled its gift to the campus, a memorial garden designed to reflect on “the event that defined their college life.” An audio recording of the dedication is available online.

Located in a stand of tall trees on the northeast corner of Kenan Stadium, just off the brick path that leads to the George Watts Hill Alumni Center and on to South Campus, is a small, bare patch of ground framed by a two-foot rock wall ringed by new shrubbery. It contains a bench inscribed “Carolina Remembers” and a plaque of remembrance of the six alumni who died in the attacks.