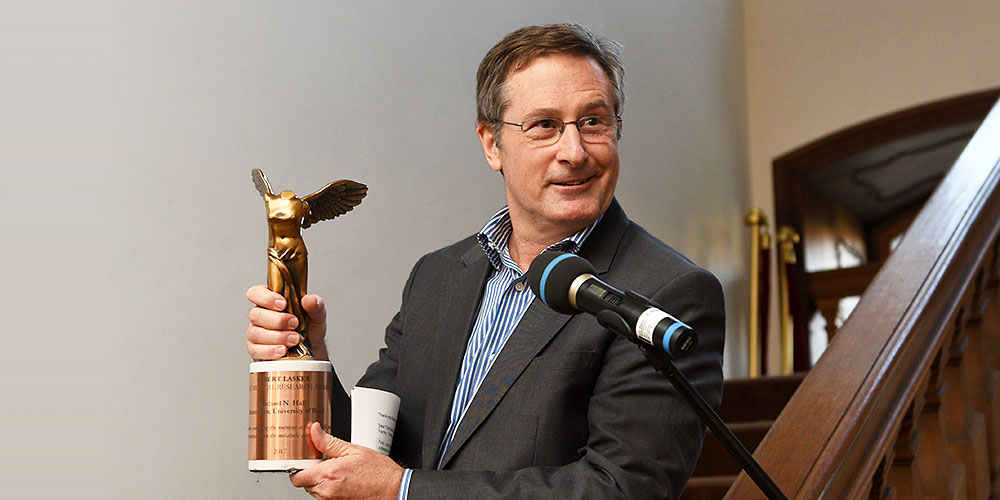 Michael Hall ’76 won the Lasker Basic Medical Research Award — sometimes called “the American Nobel” — for his groundbreaking work that has led to a new understanding of how cells grow. (Photo by Biozentrum, University of Basel)

‘You know you’re doing something good for society’

During his first few years at UNC, Michael Hall ’76 spent a lot of time in the biology lab, but he also logged many rounds on the mat, sizing up opponents as a member of the wrestling team. Early training in both arenas, he says, prepared him for a career in science.

“I think wrestling is the ultimate competitive sport,” Hall said. “It’s one-on-one, and it has a lot of elements in common with doing science. I always say that Mother Nature is a formidable opponent.”

Hall went on to become an internationally known research scientist. In September, he received one of the biggest trophies in his profession, the Lasker Basic Medical Research Award — sometimes called “the American Nobel” — for his groundbreaking work that has led to a new understanding of how cells grow. His research has broad implications for developing treatments for cancer, diabetes, obesity and many other life-threatening diseases.

The Carolina Alumni Review talked to Hall about his career and the lifetime of work that led to the Lasker Award.

How did you become interested in science, and how did Carolina nurture and advance your interest in biology?

“The key was a course I took with Professor Edgell. He taught his course in a very unusual way. It was not just a textbook course — he asked us to propose experiments to answer questions, and I liked that. That turned me on to basic science, and that led to graduate school and a career in science.”

You received the 2017 Lasker Basic Medical Research Award for your discovery of TOR proteins and how they regulate the growth of cells. You have called TOR proteins “the brain of the cell.” How did you uncover these proteins?

“In the late 1980s, we started to work on a new class of immunosuppressant drugs. These were exciting drugs because they allowed transplant surgery and the transplant of organs by suppressing the immune system. But nobody knew how these drugs worked. I had a very good postdoc who was interested in how these drugs worked at the molecular level. We started doing experiments on these drugs and studying them in yeast cells, and it was revolutionary to study them in yeast cells. People thought it was irrelevant — it was like giving aspirin to yeast cells. But we knew the advantage of working with yeast cells is you could take a genetic approach.

“We isolated mutants that were resistant to these drugs. We later sequenced these genes, and we found they encoded proteins that we eventually named TOR. From there we had to figure what function these proteins had in the cell, and we found that they controlled cell growth.
“Cells grow and divide — that’s how they proliferate. The division part had been very well studied, but the growth part was more or less ignored because people didn’t think that growth was actively controlled. Our discovery that TOR controlled cell growth changed that paradigm. What we did was figure out a fundamental aspect of cell biology — how growth is controlled.

“Over the years we realized that TOR was a protein that integrated inputs from the environment and there was an output to control cell metabolism. And that’s where I started to call it the brain of the cell because it received information and caused the cell to behave in a certain way in response to that information. Much like the brain does for us.”

Basic medical research is essential to the pipeline of discovery for improving human health and finding answers for human diseases. How has your work helped us to understand disease, and how do you see the role of TOR proteins providing new answers as medical research advances?

“Over the last 15 years, it has been shown that TOR is an important signaling protein that broadly controls cellular behavior. It’s an essential hub where a lot of information comes in and information goes out and it impinges on many metabolic processes, which, when altered, can cause a wide variety of diseases, from cancer to diabetes. It’s also been implicated in autism and depression.

“Another interesting development is that TOR is involved in aging. We’ve known since 1935 that if you eat less, you live longer. But nobody understood the molecular basis of this life extension by eating less. We learned that if you treat mice or worms or flies with rapamycin, which inhibits TOR, they lived longer.

“TOR is a validated drug network, and almost every pharmaceutical company in the world has a program where they are trying to develop new drugs that are part of the TOR pathway to treat diseases.”

In your acceptance speech for the Lasker Award, you called science your “mistress.” What has science given you in your long career?

“Science is a noble career — you know you’re doing something good for society. When we picked up this subject of working with these drugs and discovering TOR, it essentially opened the whole new field of cell growth. I knew it was important, but I didn’t realize it would be as important as it turned out to be. It went through phases. We kept making new discoveries, and others started making discoveries. Together, we found the links to diseases and then to aging — every few years, a new major advancement was made which created more excitement and brought even more people to this field.”

• Michael Hall describes the research that led to his discoveries, as well as how the movie Fantastic Voyage — the sci-fi adventure about shrinking people small enough to be injected into the human body to fix a life-threatening injury — inspired a boyhood fascination with the human cell.