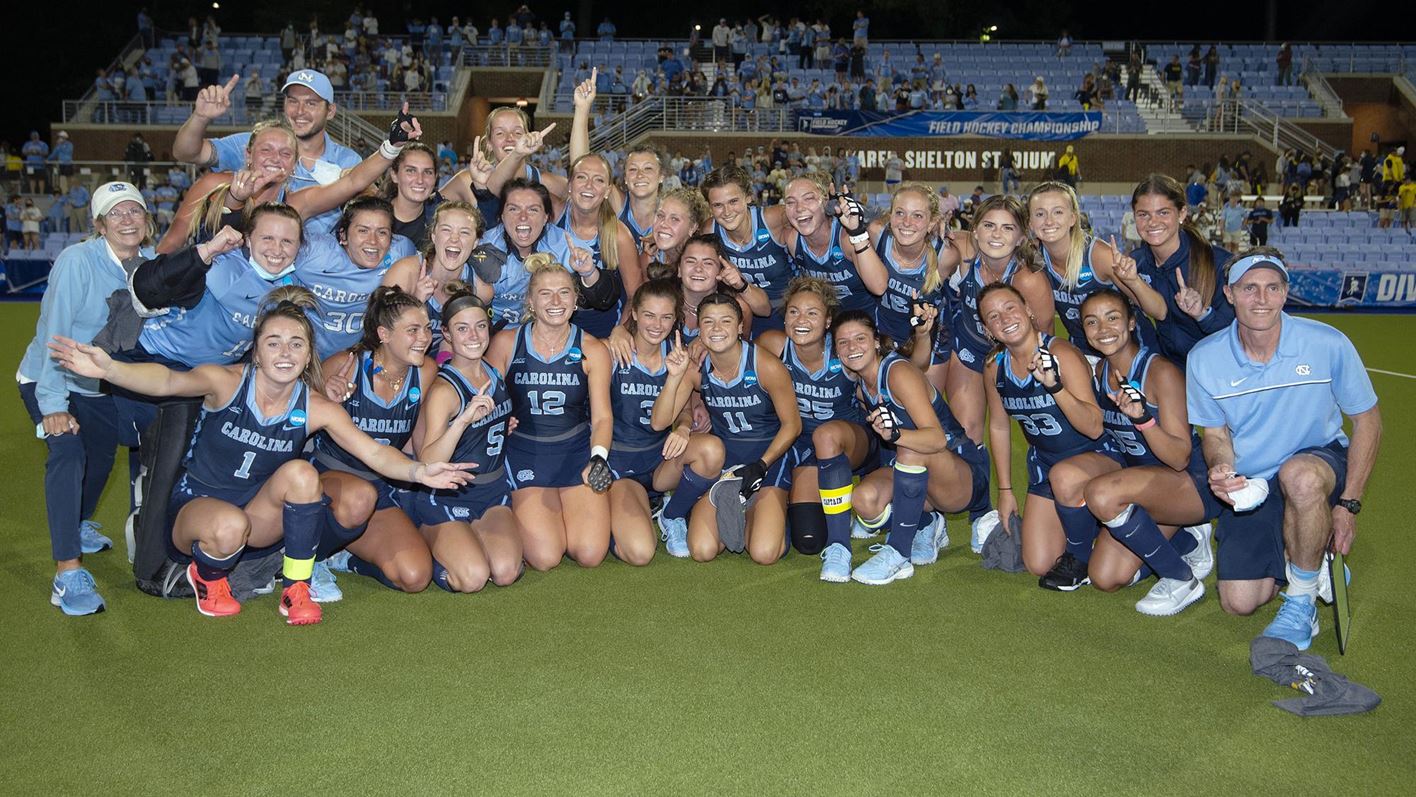 The national championship on Sunday was the first the field hockey team has won on its own field, Karen Shelton Stadium, named for the sport’s winningest coach. The Tar Heels are 37-0 overall in the stadium. (goheels.com photo)

For the third season in a row and the ninth time in program history, Carolina’s field hockey team is the NCAA champion — and for the first time, claiming the title on its own field.

The Tar Heels beat Michigan 4-3 in overtime on Sunday night to win what is technically the 2020 national championship, regardless of what the calendar may say.

UNC, the top seed in the NCAA field for the third year in a row, won at Karen Shelton Stadium to finish the season 19-1. Junior Erin Matson, the nation’s leading scorer, scored the game winner in overtime.

“What a heck of a game,” said Shelton, the sport’s winningest coach. “I’m so proud of our kids, but I also have to congratulate the University of Michigan. They played so hard and so tough. They challenged us. We like to play a little slower and a little more methodically, but you can’t do that against them — the pressure comes so fast.”

Michigan, 15-3, put pressure on early, going up 1-0 in the 10th minute of play on an unassisted goal. The Tar Heels answered just 33 seconds later on a penalty corner, their first of the game. Matson had the goal, assisted by junior Abby Pitcairn on the insert and sophomore Romea Riccardo on the stick stop.

UNC took the lead in the 18th minute when the Tar Heels were awarded a penalty stroke and senior Bryn Boylan stepped up to make her fourth of the year in four attempts, rolling a shot into the bottom right corner of the cage to give her team a 2-1 lead at halftime.

In the 38th minute the Heels went up 3-1 when Matson blasted a shot from just inside the circle and freshman Mia Leonhardt, who scored her first career goal in Friday’s semifinal win, got her stick on the ball to add another, poking Matson’s ball past the Michigan keeper.

After the Tar Heels went up by two, Michigan answered with a pair of third-quarter goals to tie the game at 3-3 heading into the fourth. UNC got off three shots but couldn’t score, and Michigan didn’t take a fourth-quarter shot.

It was the seventh overtime game of the season for UNC, which was unbeaten in the previous six. “I’m confident of our kids when we get to overtime,” Shelton said. “We’ve practiced it, and we’ve been in a lot of pressure situations.”

Just over six minutes into the seven-on-seven period, the Tar Heels drew a penalty corner, only their fourth of the game. They didn’t manage to get a shot off but drew another, and this time Matson made it count. Senior Eva Smolenaars’ insert went straight to Matson, who drove around a defender and then backhanded a shot into the cage for the win before finding herself at the bottom of the dogpile, courtesy of her third overtime game-winner of the spring.

The Tar Heels’ record at Shelton Stadium is 37-0. Although limited in size by COVID-19 restrictions, the crowd was loud and enthusiastic. The official attendance inside the stadium was 450, but many others crowded in to watch from outside the fence.

The three-peat marks the second time in program history that Carolina has won three titles in a row — the Tar Heels also won in 1995, 1996 and 1997.