Kevin Guskiewicz will be installed as 12th chancellor of the University on Sunday, Oct. 11, as part of a two-day University Day observance. This 3 p.m. event will be aired on the University’s YouTube channel...

Alumna Noted for Innovation to Speak at University Day 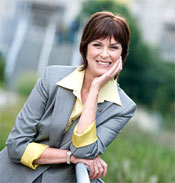 Carolina will remember the University’s past and celebrate its future during the 217th annual University Day Oct. 12.

This year’s keynote speaker will be Heather Munroe-Blum ’83 (PhD), the 16th principal and vice chancellor of McGill University in Montreal. She is responsible for daily operations and works with the campus community to fulfill McGill’s mission — the advancement of learning through teaching, scholarship and service to society.

Munroe-Blum earned her doctorate with distinction in epidemiology from Carolina and is a recipient of the Gillings School of Global Public Health’s outstanding alumni award. She also was awarded an honorary doctor of science degree at Carolina’s Commencement in 2008.

Munroe-Blum has dedicated her career to the advancement of higher education, science and innovation in Canada and internationally, advising governments and other organizations on the role that universities, research and highly qualified talent play in advancing international competitiveness and enriching societies.

Her main objectives at McGill include a commitment to strengthen the university’s leadership at the world level with respect to research, graduate education, student experience and positive societal contribution. Hallmarks of her leadership have been advancement of governance, promotion of strategic areas of excellence and impact in research and scholarship, and enrichment of the student experience.

A member of McGill’s faculty of medicine and professor in the epidemiology and biostatistics department, Munroe-Blum specializes in psychiatric epidemiology. She has led large-scale epidemiological investigations of the distribution, prevention, course and treatment of major psychiatric disorders and has been a major influence in the development of mental health policies and practices.

Since 1971, the faculty has presented the Distinguished Alumna and Alumnus Awards on University Day to recognize those Tar Heels who have made outstanding contributions to humanity.

This year’s recipients will be:

In keeping with a long tradition of celebrating campus milestones on University Day, Carolina will also dedicate Venable Hall, which will open this fall in the second phase of the Carolina Physical Science Complex, the largest construction project in the University’s history. That ceremony will be held at 3:30 p.m. at Venable Hall, located next to the first phase of the complex, which includes the Max C. Chapman Jr. Hall, the W. Lowry and Susan S. Caudill Laboratories and Fred Brooks Hall in the College of Arts and Sciences.

The original Venable Hall, home to the chemistry department since 1925, was demolished in late 2007 and early 2008. The new Venable will house the William R. Kenan Jr. Chemistry Library along with department of chemistry classrooms, lecture halls, conference rooms and the department of marine sciences. Francis P. Venable was a chemistry professor from 1880 to 1930 and president of the University from 1900 to 1914. The original Venable Hall was dedicated on University Day in 1925.