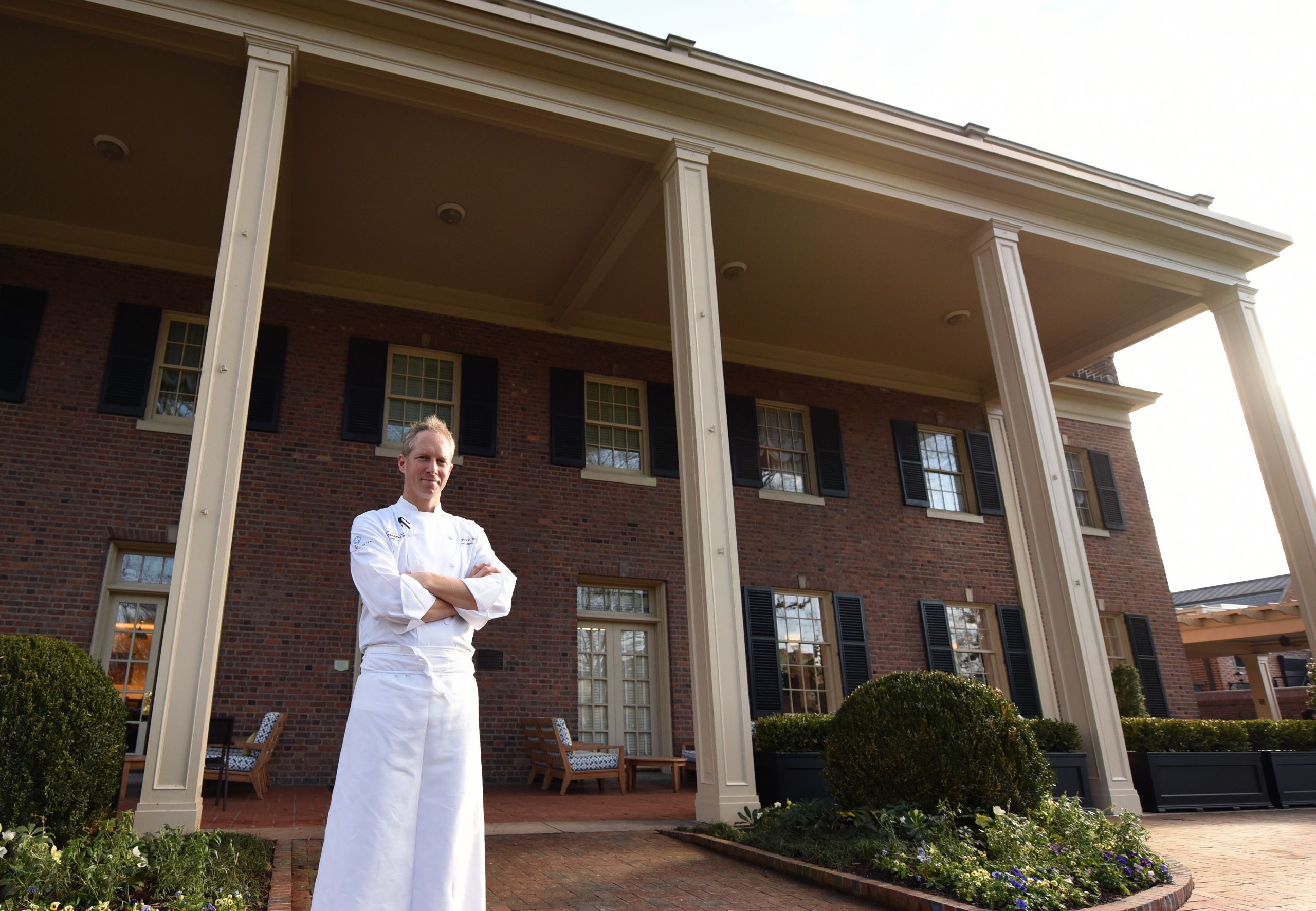 While Greensboro is only 50 miles from Chapel Hill, busing tables at the local Chi-Chi’s is culinary light years away from directing the cuisine of the historic Carolina Inn and its Crossroads Restaurant. But then new Executive Chef Brandon Sharp ’97, who’s also an Ironman triathlete, likes to take the long way around.

He returned to his native North Carolina with his wife, Elizabeth, and their three young children to be closer to his extended family (which includes brother Graham Sharp ’99, who plays banjo with the Steep Canyon Rangers). And working at the Carolina Inn has been a goal of his since he was a student at Carolina and heard some of its lore from a roommate who was a line cook there.

“The tug of home was pretty strong. And this job opened up, and I was excited about the possibility of this job,” Sharp said. He sat comfortably in the modern, renovated Crossroads Restaurant, arms folded, long legs stretched before him. Tall and slender, he wore the chef’s uniform of crisp white chef’s coat and long apron – both spotless – black pants and clogs. “It’s always been sort of this beacon on the hill for me – the best of the best in Chapel Hill.”

Sharp arrives most recently from Solbar, the restaurant he opened in the Solage Calistoga Resort in California’s wine country nine years ago. In that time, he introduced what the Michelin guide calls “California cuisine … with globetrotting influences” to the resort and earned the restaurant a Michelin star each of the past seven years. In 2015, he opened a second restaurant, the French-Creole bistro Evangeline, also in Calistoga, California.

Calistoga’s loss is Chapel Hill’s gain. As a writer for the Calistoga Weekly lamented when Sharp announced his move, “I am feeling pangs of sadness and jealousy when I think of those fortunate people in North Carolina who will now have access to a world-class chef in all the meanings of that phrase.” 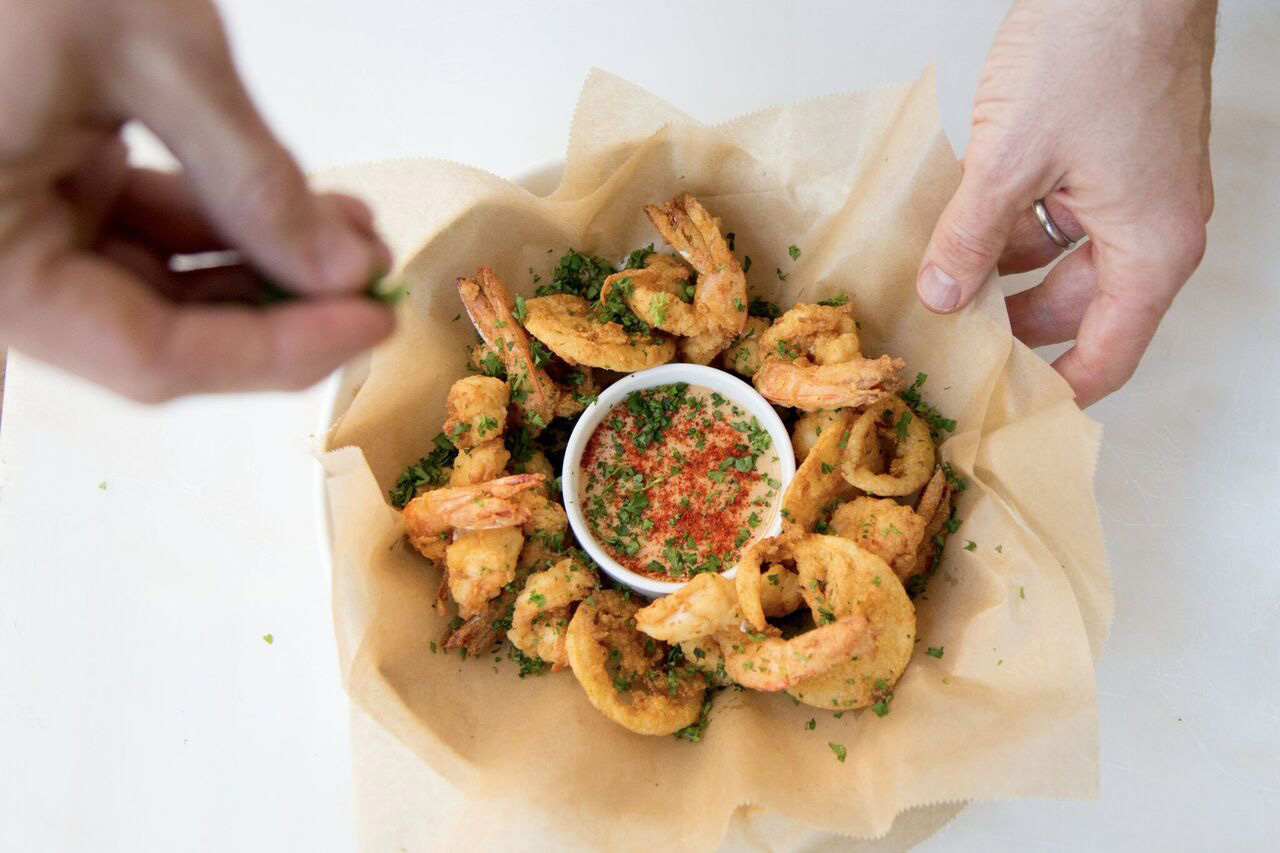 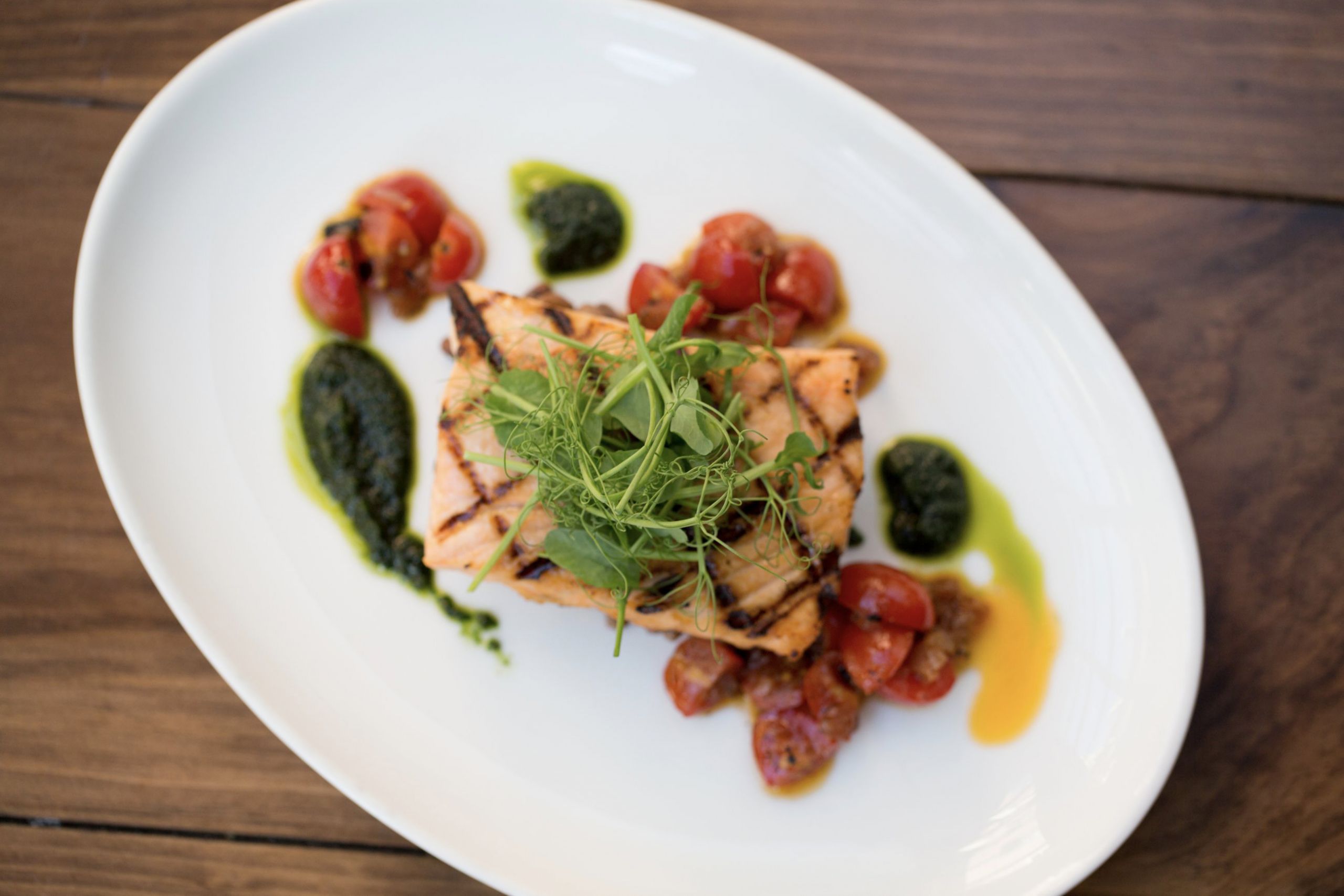 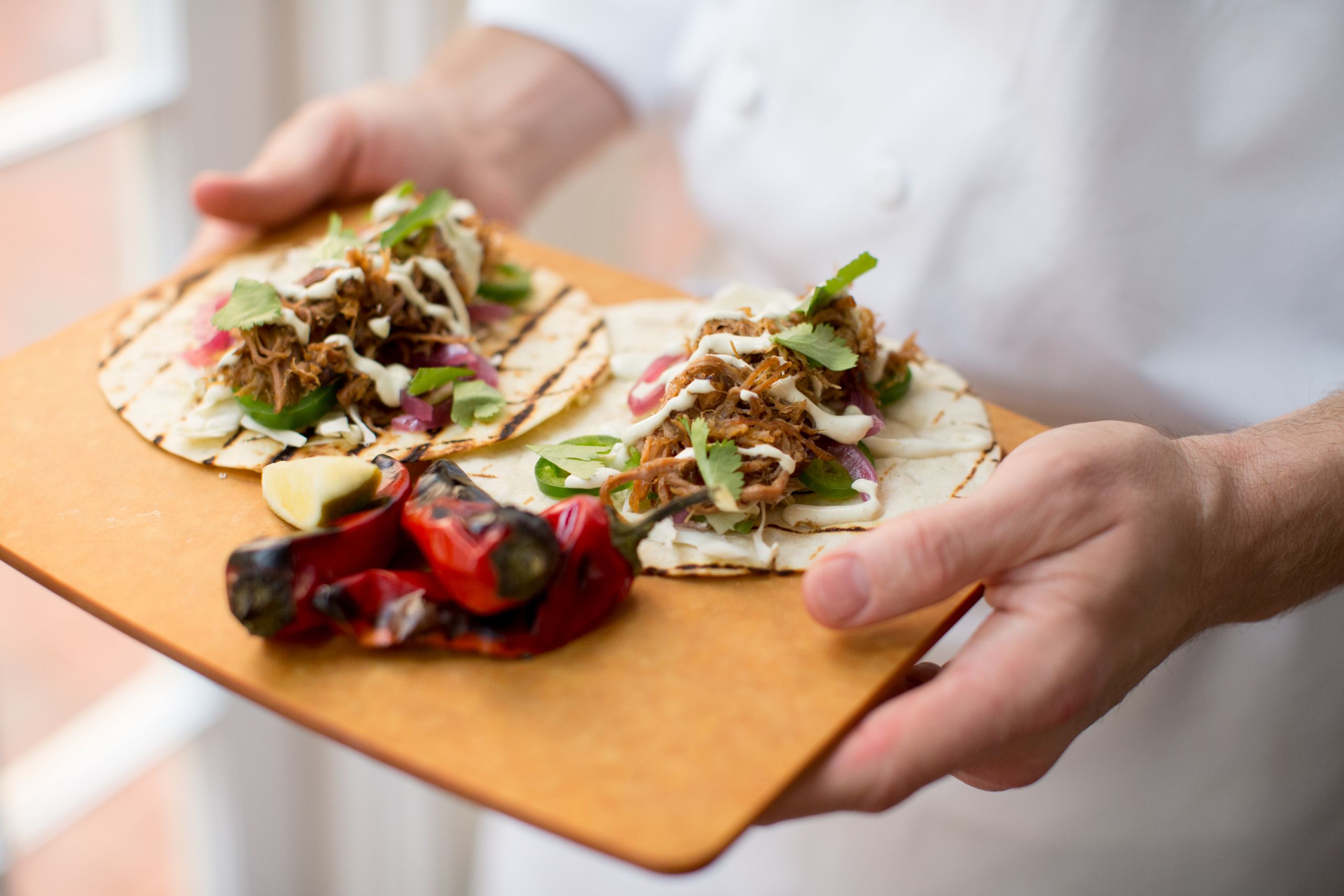 Sharp has honed his skills at some of the better known restaurants in the foodie world: as chef de cuisine at Restaurant August in New Orleans, sous chef at one-star Gary Danko in San Francisco and station chef alongside Thomas Keller at Napa Valley’s French Laundry, holder of a rare three-star Michelin rating, the highest given by the international guidebook.

Sharp trained to be a chef at the Culinary Institute of America in Hyde Park, N.Y. But when he was at Carolina, he majored in philosophy. So it’s not surprising that he has developed a philosophy of food.

“You find the best ingredient, apply the appropriate technique, add the perfect seasoning,” he said. “It’s as simple, or as complicated, as that. With ripe tomatoes, that’s a two-step process. With short-ribs, it’s a 14-step process.”

Sharp thinks most chefs put too many ingredients on a plate. He selects his ingredients carefully, trying to appeal to the diner’s five senses. To illustrate, he describes one of the entrees he has added to the dinner menu, the Midnight Special Pork Shoulder.

Covered with a salt-sugar-spice rub and slow-cooked overnight, the pork shoulder is then pressed into a brick that will be cooked in an iron skillet, making it crispy on the outside, tender and juicy on the inside. The pork is served with sweet potato puree, farro, peanuts and Asian pear.

“Visually, there’s the orange of the yams contrasted with the bright white of the pear. Texturally, there’s the juicy pork, the smooth puree, the nutty farro and the crunchy peanuts,” Sharp said. Temperature-wise, the pork is hot and the pear is cool. And so on.

Why go to all that trouble? “With an entrée, you have 12, 15, 18 bites, and every bite has to be interesting,” he said. “The challenge in composing entrees is making each bite so interesting that you want to finish.” 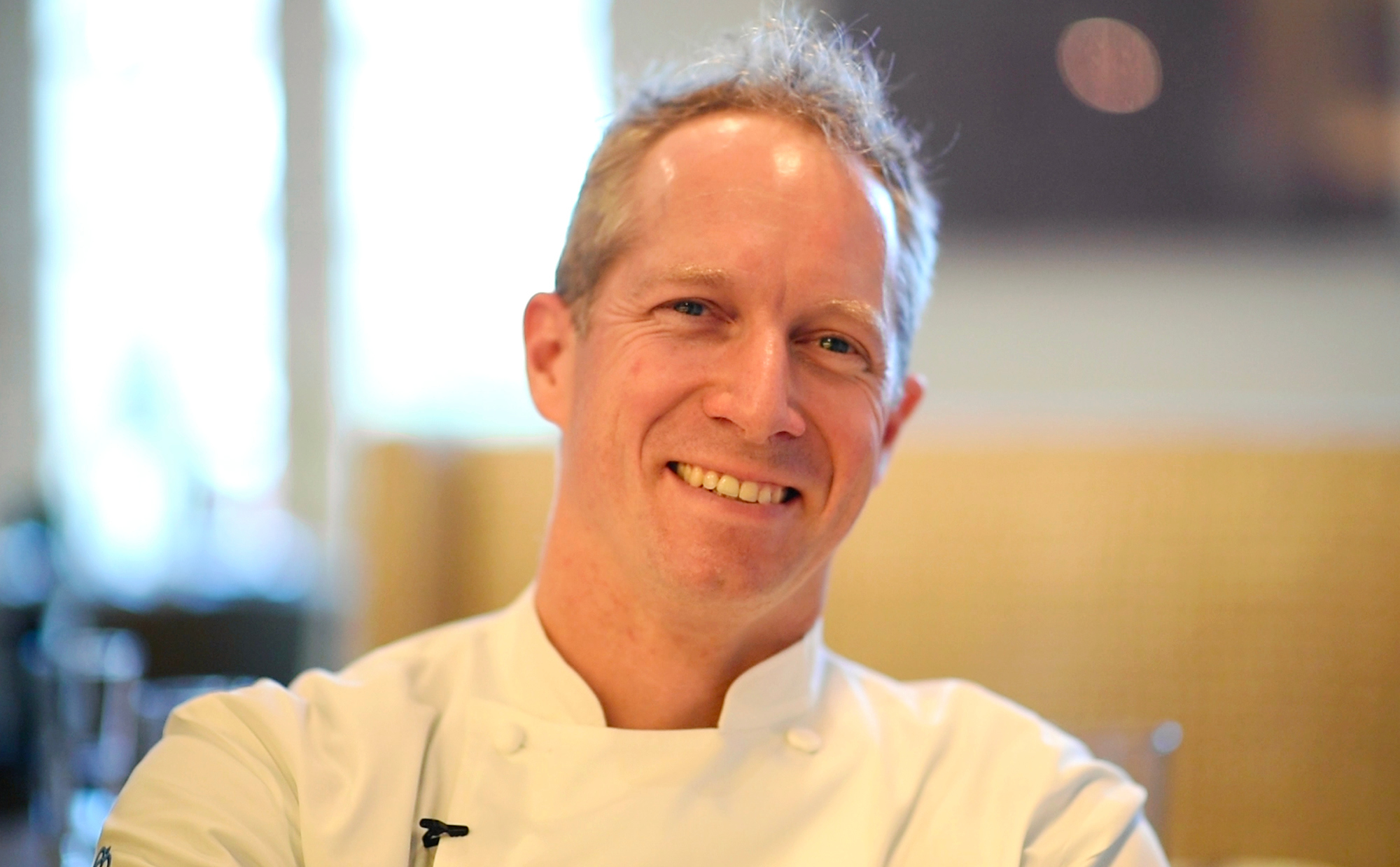 Sharp arrived only three months ago, but already he has revamped about 80 percent of the dinner, lunch and breakfast menus at The Carolina Inn. (Photo by Melanie Busbee ’04/UNC)

Sharp’s sometimes playful style extends to even the most classic of lunches: grilled cheese and tomato soup. He adds an unexpected crunchy texture to the sandwich’s buttery exterior by coating it in Parmesan cheese before cooking it. Inside is a thick, smooth layer of creamy mozzarella cheese. The Outside-In Sandwich is served with a tomato soup so thick and creamy that it’s more like a dip for the sandwich.

“I don’t have my eye on doing high-falutin stuff like tasting menus. I want the food to be approachable, generous, delicious,” he said. A diner shouldn’t have to be an expert in food to enjoy what he cooks.

Take his Iron Skillet Chicken, served with mashed potatoes, Brussels sprouts, mustard sauce and tarragon. “Now if they realize that this dish refers back to the traditional French dish of rabbit with mustard and tarragon, their enjoyment may be increased,” Sharp said. “But the dish must be delicious on its own, from the very first bite.”

The chef eats the way he cooks. Anytime he has to eat something that isn’t interesting and delicious, he calls it “wasting a meal.” “My biggest fear when we’re out or on vacation is that we’ll have to waste a meal, like I’m going to have to eat a bad turkey sandwich, just because it’s lunch and there’s nowhere else to eat,” he said.

And even though, as a triathlete, he burns lots of calories, the chef can’t see food as just fuel for the body. When training, “I would grab a granola bar,” he said, “but it’s got to be delicious!”

Sharp arrived only three months ago, but already he has revamped about 80 percent of the dinner, lunch and breakfast menus and plans to take a critical look at banquet and reception foods next.

“There’s a saying that ‘success is the sum of a thousand things done correctly,’ ” he said. His idea of success is simple: “I want my guests to leave the restaurant happier than when they arrived.”

— Susan Hudson ’84
This article was originally published in the Feb. 8, 2017, University Gazette, the newspaper for UNC faculty and staff. 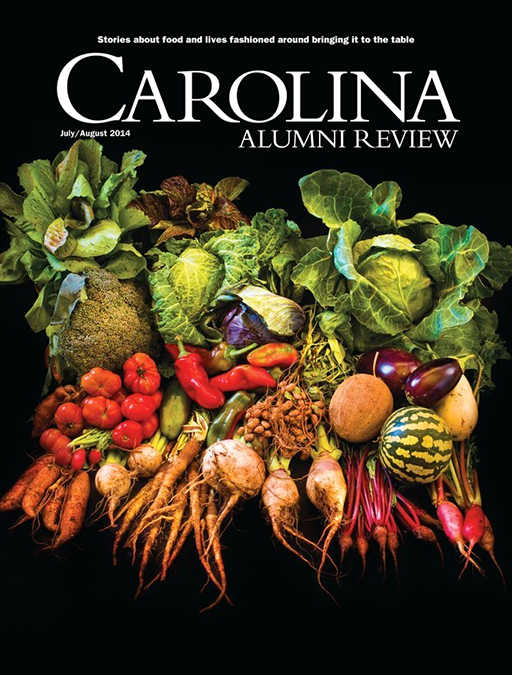