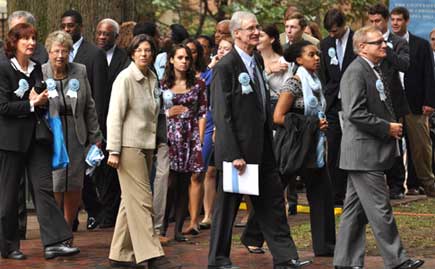 First the Bell, Then the Tears

Debra Pickrel ’80 was just fine until the bell sounded.

On a University Day that threatened rain and even sprinkled a few raindrops at times, Pickrel, a member of the GAA Board of Directors from New York, had walked in the Alumni Processional with former classmates on Polk Place. As it has done during previous chancellor installation ceremonies, the GAA organized the processional, with 200 alumni representing the classes of 1940 to the present.

Pickrel and many others watched with pride as the chancellor’s medallion was bestowed upon Carol Folt, who was sworn in as UNC’s 11th chancellor. She’d even been fine as the new chancellor spoke about the University’s history and its leading role in education.

Then the bell began tolling — 11 times for the 11th chancellor.

“I was in tears,” she confessed. “Even my sorority sister who sat beside me was crying.”

The emotional moment brought back memories of her first visit to the campus — she arrived at Smith Building with her mom and dad in the family station wagon on a college scouting trip. She hopped out of the car and took in the view of Polk Place and fell in love.

For the Folt installation, Pickrel found herself gazing from another perspective.

“As a witness to history on University Day, I could see the connection of the two events,” she said. “It was overwhelming, and I was overcome with joy. It was a uniting moment and a great moment for women in Carolina history.”

The installation of the first female chancellor was especially meaningful for Pickrel. She was in the class of 1976, the first UNC class that was 50 percent female.

While the historical significance of the day drew Pickrel to participate in what she called “a banner day in the history of North Carolina,” it also inspired Greg Perkins ’03 (MSW) to take a day off from work to be a part of the procession. Perkins, who lives in Fayetteville and is a professor of social work at Fayetteville State University, normally teaches on Saturdays. But he told his boss he had to be a part of this historic occasion. His boss initially hesitated at the notion, but when Perkins explained, “Look what I’ve brought to Fayetteville State from my UNC experience,” his boss was all for it.

Perkins, a former member of the GAA Board of Directors, confessed that just thinking about being in the processional significantly elevated his heart rate.

“University Day is a great tradition,” he said with a smile. “We have a new chancellor, our first female chancellor, with fresh ideas for the next generation, so I had to be a part of the event.”

The tradition of the processional also has been embraced by Sophie Cody ’40, who has been a regular at University Day processionals and on Saturday stood beaming at the front of the alumni processional line. She had come all the way from Winston-Salem to lead the alumni, who stood in a line that stretched from the Polk Place corner of Saunders Hall back to the steps of Manning Hall.

Cody wore a special necklace for the event that included a gold coin that was given to her by then-UNC Chancellor Robert House (class of 1916) while she was in high school. House encouraged her to come to Carolina, and she transferred after attending Louisburg College. She recalls working in the basement of the chemistry building to help pay her expenses.

Cody said she was thrilled and proud to have a woman as chancellor and believes Folt’s academic credentials will help her in the job.

“She has a scientific background,” Cody said. “That should pull her through as she faces some complicated times ahead. She’ll do the best she can.”

Lila Friday ’51 of Raleigh said the thrill of being back in Chapel Hill for the processional was matched by the excitement and emotions at seeing so many alumni who have worked on behalf of UNC.

“University Day looks back to a wonderful tradition and things we can be so proud of,” she said. “It’s a celebration of UNC’s history and what’s coming in the future. And this year we can look forward to what a new chancellor can bring.”

The day was very much a family affair for several alumni. Sarah Cobb ’84 of Holly Springs attended what was her first processional. She had planned to attend the event with her daughter, Shannon ’13, but Shannon was called into work at the last minute.

So Sarah provided a running account of the event for her daughter and family to follow, even texting in the parking lot after the event.

“I got on Twitter and put a picture of my Carolina blue rosette on Facebook and posted messages,” she said. “What a great day!”

Shannon followed what was coming across on Twitter and Facebook from her mom and gave the ultimate compliment. She texted back: “Cool! I wish I could have been there with you.”

For one family the processional is a reminder of new beginnings. Danita Morgan ’81 and her husband, Chris White ’81 (AB, ’84 JD), took part in the procession partly because of the historical significance and partly to celebrate the 33rd anniversary of their first date.

Morgan and White met when they were marshals at the 1980 University Day. After that procession they got acquainted over a meal at the Porthole restaurant — White remembers he ordered the GS7 with sweet tea and extra rolls.

“Folt faces some tough times,” said Morgan, who is a longtime leader with alumni in Wake County. “But this is a fresh start and uplifting and can be a chance for the university to turn a corner.”