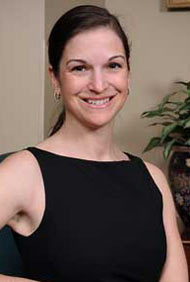 A best-selling author of novels that depict the struggles and triumphs of teenagers has been honored with a Distinguished Young Alumni Award by the General Alumni Association.

Sarah Dessen ’93, whose 10th book, What Happened to Goodbye, will be published in May, received the award at a banquet on Friday for bringing credit to the University through her achievements.

“The remarkable accomplishments of many of Carolina’s younger alumni such as Sarah are truly inspiring,” said GAA President Doug Dibbert ’70.

Dessen, who grew up in Chapel Hill, graduated with a degree in English after studying creative writing. Her first book, That Summer, was published in 1996. That novel and her second, Someone Like You, were the basis for the 2003 movie How to Deal, starring Mandy Moore and Allison Janney.

Dessen’s themes address issues facing teenagers as they grow into young adults. Many of her books have won awards or received top recommendations from such prominent literary organizations as the American Library Association and have appeared on major best-seller lists, including The New York Times.

Since 1989, the GAA’s Distinguished Young Alumni Awards have recognized alumni age 40 or younger whose accomplishments have brought credit to the University. A roster of past recipients is available at alumni.unc.edu/awards.