When employees came to work at the GAA on a rainy day, Elizabeth Morgan, warm,... 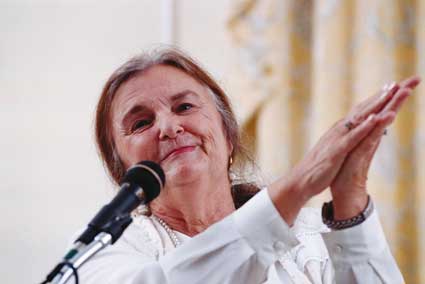 Doris Betts ’54 was a legend on the UNC campus. Students flocked to her creative writing classes, and writers sought her advice on the craft. And her love for books and writers was surpassed only by her devotion to UNC.

Betts — who died Saturday at her Pittsboro home at age 79 — taught fiction writing at UNC for 32 years, won the Tanner and Carmichael teaching awards and was the first woman elected to chair the faculty. In 1999, the University presented her with its highest award for faculty, the Thomas Jefferson Award.

The University established a $1 million endowed professorship, the Doris Betts Distinguished Professorship in creative writing, in 1998.

“The South has lost one of its most distinctive voices with the passing of Doris Betts,” Chancellor Holden Thorp ’86 said in a statement released by the University. “She leaves behind a rich literary legacy, many friends who mourn her and hundreds of writers who developed their talent in her classes.”

Her works included Souls Raised from the Dead, which won the Southern Book Award in 1995, and The Sharp Teeth of Love, her most recent novel. Gentle Insurrection, her first collection of short stories, was published in 1954, and her first novel, Tall Houses in Winter, followed in 1957.

Other honors included the N.C. Award for Literature, the John Dos Passos Prize and the American Academy of Arts and Letters Medal of Merit for her short stories. She was a three-time winner of the Sir Walter Raleigh Award for Fiction from the N.C. Literary and Historical Association.

An only child of millworkers in Statesville, she learned to read before first grade. She wrote poetry until she went to Woman’s College in Greensboro (now UNC-Greensboro). She switched to prose and immediately won recognition for her short stories.

Her devotion to UNC was absolute. She oversaw the first-year composition program and took on committee assignments with enthusiasm, and when the chancellor needed her to speak at a fundraiser, she was there. She often went straight from her classes to a University event and then to an evening appearance at a book club or a library.

She received the GAA’s Faculty Service Award in 1992 and its Distinguished Service Medal in 2005.

She donated her papers to Boston University in the 1970s but regretted the decision. A campaign and legal process to transfer the papers from Boston to the archives in Chapel Hill recently brought the archives back to UNC.

Betts helped her students believe they had potential. But she also gave them blunt advice: Expect disappointments if you want to become a writer.

“You have to want it a whole lot,” she said in a 1997 interview. “There are lots of easier things to do. I simply was more stubborn than some people.”