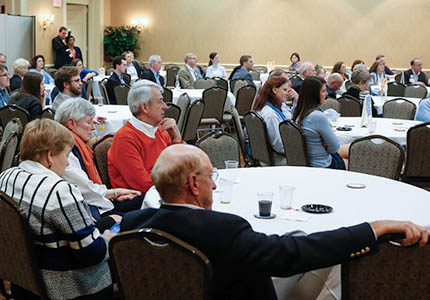 The Virginia is for Tar Heels event featured speakers who have strong allegiances to both UVA and UNC.

Webb entered UNC in 1795 and was admitted to the Dialectic Society on a unanimous vote in June 1796. He did not receive a degree with his class, but by 1797 he was teaching in the University’s preparatory school, according to docsouth.unc.edu. He later went on to become a UNC professor of Greek and Latin and was a member of the Board of Trustees from 1809 to 1818; during that time, he received his bachelor’s degree in 1812 and his master’s in 1815.

“We joked that if he had just walked a little faster” in the 1790s, Scouten said, “maybe he would have gotten there before Hinton James and had a dormitory named after him.”

This kind of crossover — a foothold at UVA and another at UNC — is what defined the fifth and final event this week in the GAA’s Virginia is for Tar Heels program that took place in Charlottesville on Friday, the eve of this year’s match-up between the UNC and UVA football teams.

“We are about to witness the South’s oldest football rivalry,” said Tom Faulders, president and CEO of the UVA Alumni Association. Both the first and second games ever played between the two universities took place in 1892, he said. “The first game was won by the University of Virginia, and the second game was won by The University of North Carolina, and we’ve been going back and forth ever since.” 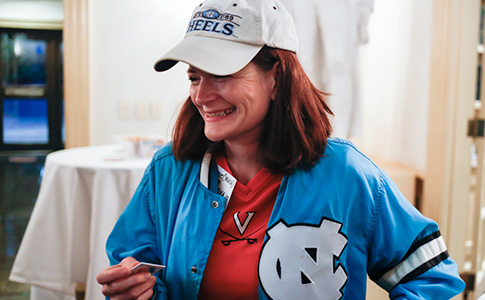 Held at UVA’s Alumni Hall, nearly 100 people turned out for the final Virginia is for Tar Heels event.

Held at UVA’s Alumni Hall, nearly 100 people turned out for the final Virginia is for Tar Heels event featuring two speakers who have strong allegiances to both universities: Ken Wallenborn ’51, a retired surgeon and clinical professor, received his undergraduate degree from UNC and his medical degree from UVA; Carolina business Professor Ted Zoller ’10 (PhD), received his master’s degree from UVA.

Both universities “are seen as beacons on the hill, both as great public institutions,” Zoller said.

Mentioning the Old Well, the Rotunda and other landmarks at the two universities, Zoller talked about the allure of both campuses. “You just feel the sense of something that’s drawn you there. I’d call it a little bit of a mystery.”

His sentiment reflected that of many others who attended the event. “You can’t put your finger on it, but it’s something magical,” said Charlottesville resident Tina Bridges Anderson ’80. Chapel Hill, she said, “feels like home.”

Asked to compare the student experience at both universities, the panelists drew clear distinctions. “They wore coats and ties here in Charlottesville. We didn’t in Chapel Hill.” Wallenborn said.

“Down there,” he added, “they greeted you with, ‘Hey you!’ And up here they said, ‘Who’s your father, who’s your grandfather?’”

Zoller put his dual experiences in literary terms. “At UNC, it’s Paul Green and Thomas Wolfe. They are folks that kind of get in the mix. Whereas here, it’s [William] Faulkner and Edgar Allen Poe.”