Just as Clarence Whitefield ’44 digitized alumni records to more efficiently keep the University connected to alumni, the GAA built its digital communications to make it easier for Tar Heels to stay connected to one another.

Andrea Saye ’08, the GAA’s manager of marketing and advertising, tag teams with marketing coordinator Dree Hickey ’15 to initiate conversations with alumni on a number of social media platforms: Facebook, Instagram, LinkedIn, TikTok and Twitter. They send newsletters and event announcements via email and recognize birthdays in personal messages to GAA members. Through the GAA’s YouTube channel, alumni can attend events remotely. All of this augments the work of online coordinator Dave Drake ’92, who has made the GAA’s website more user-friendly over the years.

In 2002, when Drake was hired, the website was little more than an online, five-page pamphlet. Any informational changes staff wanted to make — perhaps an event location was moving due to rain — had to go through him for recoding. One of his first initiatives was to move the website to a framework that enables other staffers to quickly and easily make updates themselves.

Drake and two student interns built a data-driven website that launched in 2005, and he later redesigned it, making it easier to navigate.

“We always try to put ourselves in the shoes of a user outside the building to make it easier for alumni to find the information they’re looking for,” he said. 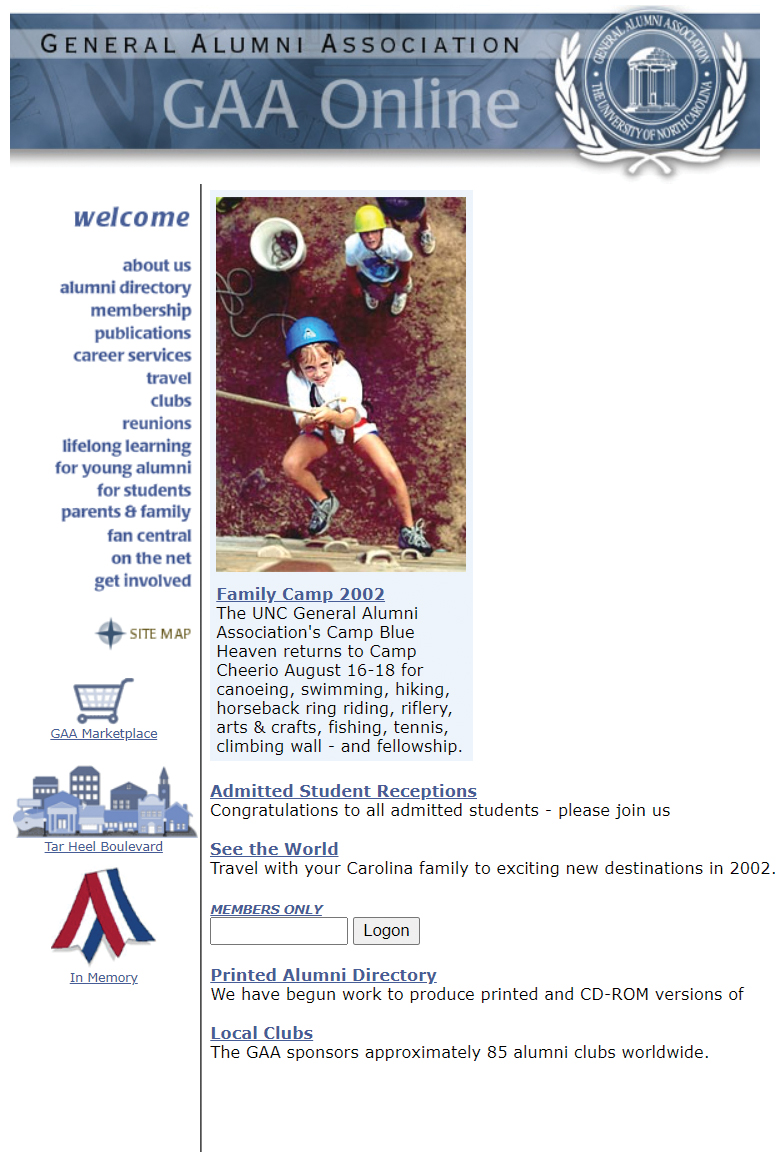 In 2002, the GAA’s website was little more than an online, five-page pamphlet.

Drake, using input from staff and alumni focus groups, revamps the website every few years to keep pace with digital trends. During the most recent overhaul, in 2015, the site had more than 15,000 webpages. He said it wouldn’t surprise him if there were more than 20,000 now.

“Every news story we’ve posted since the prior redesign in 2005 is still accessible on the website,” Drake said. “It’s all indexed and searchable. We continue to add to that weekly.”

Traffic to the website varies depending on what’s happening. On Saturday, April 2 — the day UNC played and beat Duke in the NCAA Men’s Basketball Tournament semifinal game — the website had more than 36,000 unique views. In the super-quiet summertime, the site might see fewer than 2,000 a day.

The top-ranked page people visit? “What is a Tar Heel?.” Not surprising, the view count spikes during nationally broadcast athletics events.
Drake surmises “people are sitting on their couch watching a game and wonder about the name and say, ‘Hey, Siri. What’s a Tar Heel?’ Then Siri takes them to our page because it’s the top Google result.”

When Drake posts a news story on the website or adds details about an event, the social media team posts on Facebook, where the GAA has been active since 2007, to alert the page’s 60,000 followers and drive them to the website for details.

“We’re always keeping an eye out for new technologies and new forms of social media,” Drake said. “There’s so much competition for everyone’s attention these days it can be difficult to get your message in front of folks.”

Saye went from new grad to new GAA hire in 2008, starting in marketing before Instagram and Pinterest were born. She launched the GAA’s Instagram account in fall 2012. With more than 355,000 alumni, she said, “We want to hear everyone’s story about what Carolina meant to them,” and social media strengthens those connections.

“We can put a single photo on Instagram of a brick path, and it can evoke a memory from someone who graduated in 2022 or in the 1980s,” she said. “We can all have the same memory of tripping over uneven bricks.”

She or Hickey might post a question on Facebook: What’s your funniest Carolina memory? Immediately, a hundred people might reply, with alumni who attended UNC 20 years apart discovering they had the same professor — which begins a social media conversation.
“They were complete strangers before, but their shared experience brings them together,” Saye said.

The GAA opened a TikTok account in 2021. Saye and Hickey might make a quick video as they walk across campus, down Franklin Street or through Davis Library, overlay some fun, trendy music and post it on TikTok or Instagram. Very short, very entertaining. They might post it on Facebook, too, or include a link to it in an e-newsletter.

“Some people graduate and don’t come back for 10 years,” Saye said. “We can be a little window for them to see what’s going on on campus.”
The reward comes when Hickey concocts a post encouraging alumni to enter to win Carolina swag. When she sends the prize to the winner, she handwrites a note, personalized with the alumnus’ name, and tucks it in the package, which she sends “via good ol’ fashioned snail mail,” she said. When she and Saye consider new Carolina merchandise, they’ll ask alumni for feedback.

Saye and Hickey brand every social media post with #UNCAlumni and encourage alumni to tag their own Carolina photos and posts with the hashtag so the GAA can extend its reach to other alumni. That way, someone in Alaska can feel as connected to Carolina as someone in Asheboro.

“We have the job of keeping the magic of our alma mater alive,” Saye said. “That’s pretty amazing.”