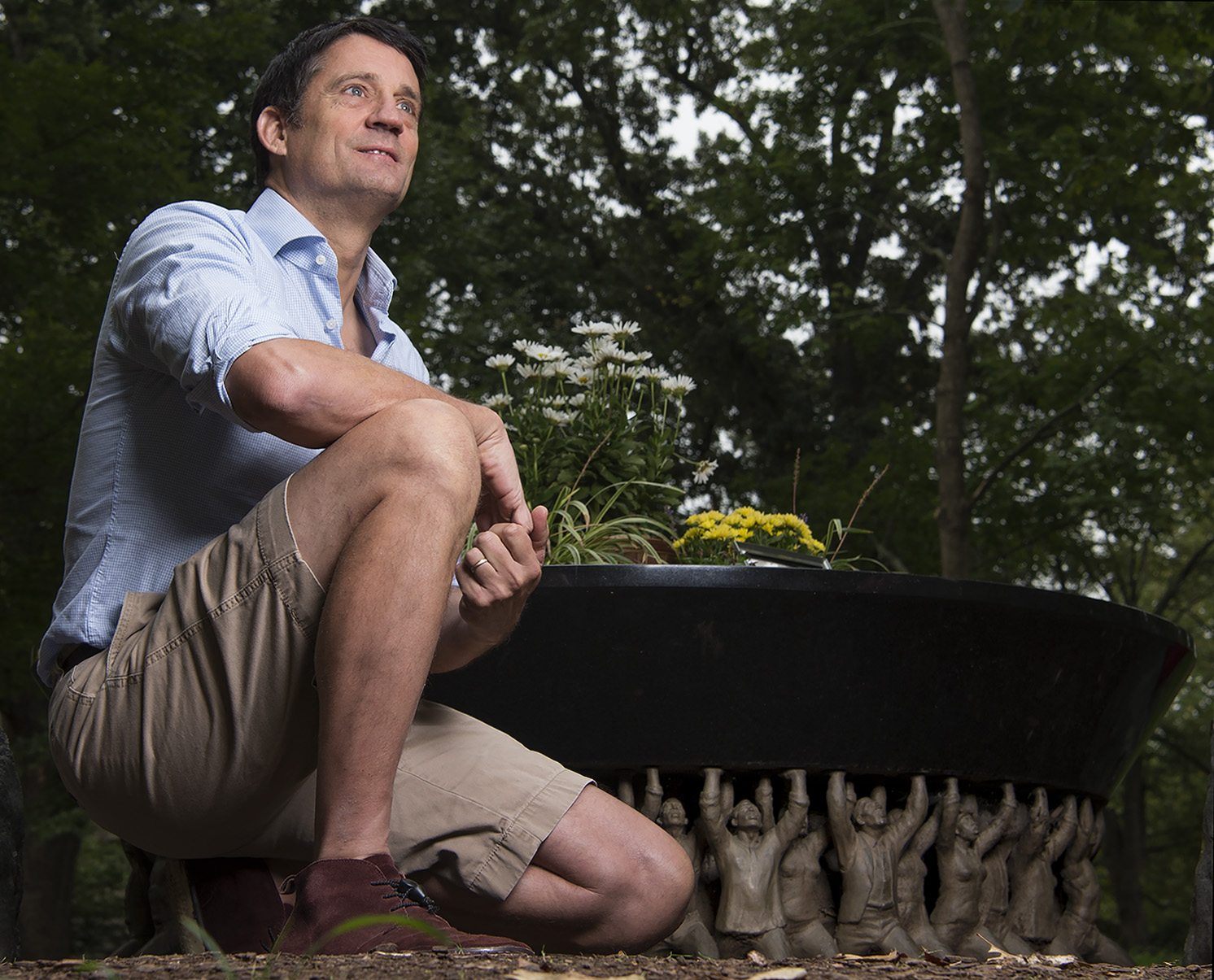 “There have always been people talking about this,” W. Fitzhugh Brundage said of the conflict over Civil War markers and statues. “But this is obviously much more intense.” (Photo by Grant Halverson ’93)

W. Fitzhugh Brundage is not a political commentator and doesn’t want to become one. The chair of UNC’s history department is given to long pauses and carefully chosen words.

But as a scholar of Southern history and collective memory, Brundage has been thrust into one of the country’s most contentious debates: the fate of thousands of Confederate monuments on public land across the U.S.

“There have always been people talking about this,” Brundage said of the conflict over Civil War markers and statues. “But this is obviously much more intense.”

Recent months have brought large protests around UNC’s own Confederate memorial — Silent Sam, the bronze rebel soldier who has stood sentry over Carolina’s north quad since 1913. The calls for Sam’s removal are part of a national outcry following violent demonstrations in Charlottesville, Va., in August, when white nationalists rallied to the defense of a Robert E. Lee statue in a public park.

The Silent Sam controversy has a long-simmering life of its own, a thread of campus history that Brundage has studied closely. His 2005 book, The Southern Past, looked at the way regional history has been written and rewritten to suit the political winds of each era and how monuments such as Silent Sam often were motivated by resistance to racial equality.

“I think Silent Sam should come down,” Brundage said. “I firmly believe that. But there are people who disagree with me whose opinions I respect. And I figure I haven’t done a good enough job of persuading them.”

Brundage has spent much of his career persuading people to revisit the past. Separating memory from myth has never been easy in a region with such a profoundly painful history, as Brundage has seen in his own classroom. Many of his students, steeped in a glorified and sanitized version of Southern heritage, bristle at taking a deeper look.

“My very first semester at Carolina, I taught a first-year seminar on Southern historical memory, and it was the least successful course I’ve ever taught,” Brundage recalled. “I had never taught this stuff to Southerners before, and many of them disliked that class intensely. The student evaluations were crushing.”

Experiences like that have led Brundage to new approaches. A stark rebuttal to the Lost Cause isn’t likely to open minds, so Brundage looks for subtler ways to get the conversation started.

With monuments, he prefers to talk about the entire landscape of public spaces instead of focusing on any particular statue. Rather than a heated debate over what Silent Sam does or doesn’t represent in isolation, Brundage aims for a broader discussion of what UNC’s public space ought to communicate to students and visitors.

Which parts of campus history are represented? Which aren’t? Who decided all of that, and are we still bound by those decisions?

“Historical memory is not simply the articulation of some shared subconscious but rather the product of intentional creation,” Brundage writes in The Southern Past. “Collective memory, then, should not be mistaken for an ‘objective’ record of the past.”

Helping people see our public landscapes as the product of human decisions — subject to all the politics, biases and personal feelings that are part of the human condition — brings the conversation back to our present set of choices. Someone, or some group of people, chose to put that monument there. We have a right to reconsider their decisions, Brundage holds, in light of changing circumstances.

Working with UNC Libraries, he built an interactive website called Commemorative Landscapes of North Carolina. It catalogs almost every public monument in the state, including more than 230 dealing with the Civil War. It opens a fascinating window into how communities large and small have chosen to represent themselves — what they’ve chosen to remember and how they’ve presented those memories.

Tiny Carthage in Moore County has seven documented monuments, everything from an ornate 1996 bicentennial clock to a 1922 plaque praising President Andrew Johnson for resisting Northern “fanaticism in the bitter days of Reconstruction.” Chapel Hill has at least 27 plaques, statues and memorials.

“It’s a tool that can be used to think about the historical landscape we’ve inherited,” Brundage said of the website. It includes lesson plans for schoolchildren, inviting them to look with fresh eyes on the public spaces in their communities. “How does the built landscape of the South reflect the history of Southerners, white and black, and who determined what was put on that landscape?”

The site was a deliberate way of venturing into the national debate on Confederate memorials, since classroom discussions and scholarly books don’t always resonate in the public sphere. As protests erupt about controversial monuments from New Orleans to New York, Brundage is determined to bring context and academic rigor to the political melee.

“This stuff gets very close to some people’s sense of core identity. I don’t see my task as shattering anyone’s identity, but I would like people to be self-reflective and self-conscious. I’m going to try to challenge you.”

Earlier this fall, he penned a detailed article for Vox pushing back against the idea that removing monuments means erasing history. “The architectural landscapes we have inherited are neither sacred nor unchanging,” he wrote.

And he appeared on the PBS NewsHour to argue that contemporary Americans have the right to make new choices about their public spaces.

“We do live in a different society, a profoundly different society, from the one that created these monuments,” he said during the NewsHour interview. “I think it’s entirely within a community’s right to move a monument into a new setting and provide it with a kind of historical context.”

That’s his preferred outcome for Silent Sam. He doesn’t want to see the statue destroyed but rather moved to a museum or some other appropriate space. It’s not about erasing the monument but about reclaiming the living, evolving space of the University’s oldest quad.

Brundage knows these arguments take time, but the latest round of controversy has him feeling hopeful. He recently got a letter from a former student, someone who took that disastrous first-year seminar.

“He told me how he continues to think about that course even all these years later. That was very uplifting to me.”

And a reminder that our view of the past — our collective memories and our personal histories — always can change.