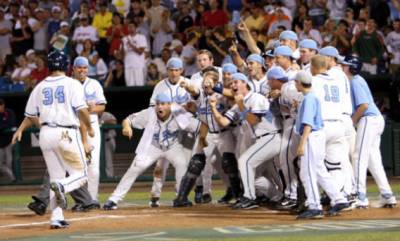 Carolina’s Chad Flack did it again. For the third year in a row, he won an NCAA Tournament game with a home run.

In the bottom of the eighth Saturday night, the senior whacked a 3-2 pitch over the bleachers in left field to give the Tar Heels a 4-3 victory over Fresno State and stave off elimination.

“Wow, I don’t really know what to say,” UNC coach Mike Fox ’78 said at the post-game news conference. “I know Chad Flack is the most clutch player I’ll ever be fortunate enough to coach. He’s proven that time and time again.”

UNC, now 54-13, plays Fresno State again Sunday at 7 p.m. EDT in the double-elimination tournament in Omaha, Neb., for the right to take on Georgia in the finals.

“I keep thinking we’re dreaming,” Fox said, “but we’re happy to be here for another day.”

Flack’s blast was only the second homer for the Heels during the CWS. The first was a game-winning grand slam by junior Tim Federowicz Friday night against LSU.

Not only did the Tar Heels win in dramatic fashion for the second night in a row, they did it with sophomore Alex White, their best starting pitcher, winning in relief.

White came on in the seventh with the bases loaded and only one out. He proceeded to strike out the next two Bulldogs to keep the Heels within striking distance at 3-2.

White, Carolina’s top starter all year long, said it’s fun to come on in relief. “It is a different mentality,” he said. “With the bases loaded, you have to throw strikes. Tonight I primarily went with the fast ball and it worked.”

Fresno State, which picked up a run in the first inning off UNC freshman starter Matt Harvey, led throughout until Flack’s home run.

The Bulldogs upped the lead to 3-0 in the fourth when Tommy Mendonca lifted a two-run homer to right center. It was the first home run Harvey has yielded all year.

The Tar Heels, who left eight runners on base, including four in the first three innings, finally got on the board in the fourth inning. Senior Seth Williams singled in Flack, who had doubled, to make it 3-1. A fielder’s choice by sophomore Dustin Ackley scored Gore, who had singled, to pull Carolina to within a run at 3-2.

It stayed that way for the next three and a half innings as pitchers for both teams pitched out of trouble.

“Our pitching was the story of the game,” Fox said. “Matt [Harvey] gave us exactly what we needed … [and] I think Alex [White] has found a new role for us.”

But it took offense to put the Bulldogs away.

UNC sophomore Kyle Seager doubled to the wall in right center to lead off the eighth. Flack squared to bunt until the count got to 3-1. He swung away and fouled it off. With the count 3-2 and the sacrifice bunt off, Flack unloaded on a hanging pitch from Fresno State’s Justin Miller to put Carolina up 4-3.

White mowed down the Bulldogs in order in the ninth, striking out the last two batters, and setting up a rematch Sunday night. The game will be telecast on the ESPN Classic network.

Junior Adam Warren, who started in Tuesday’s 5-3 loss to Fresno State, is rested and will take the mound for the Heels. The Bulldogs are in a bit more of a predicament at pitcher as Miller was scheduled to start if another game were necessary. He still might, but he was called on for a couple of innings of work in this game as Fresno State tried to go ahead and put the Heels away.

“Justin [Miller] was throwing the ball exceptionally well,” Fresno State coach Mike Batesole said. “Give credit to Chad Flack, because he really got into that ball.”

Flack also hit a game-winning home run in the ninth against Alabama in the super regionals in 2006. Then he homered late in the game against South Carolina last year to put the Heels in the College World Series.

Flack said this homer against Fresno State ranks as his favorite so far. “This has to be No. 1 right now,” he said. “We’re here another day. We have a chance to play tomorrow.”