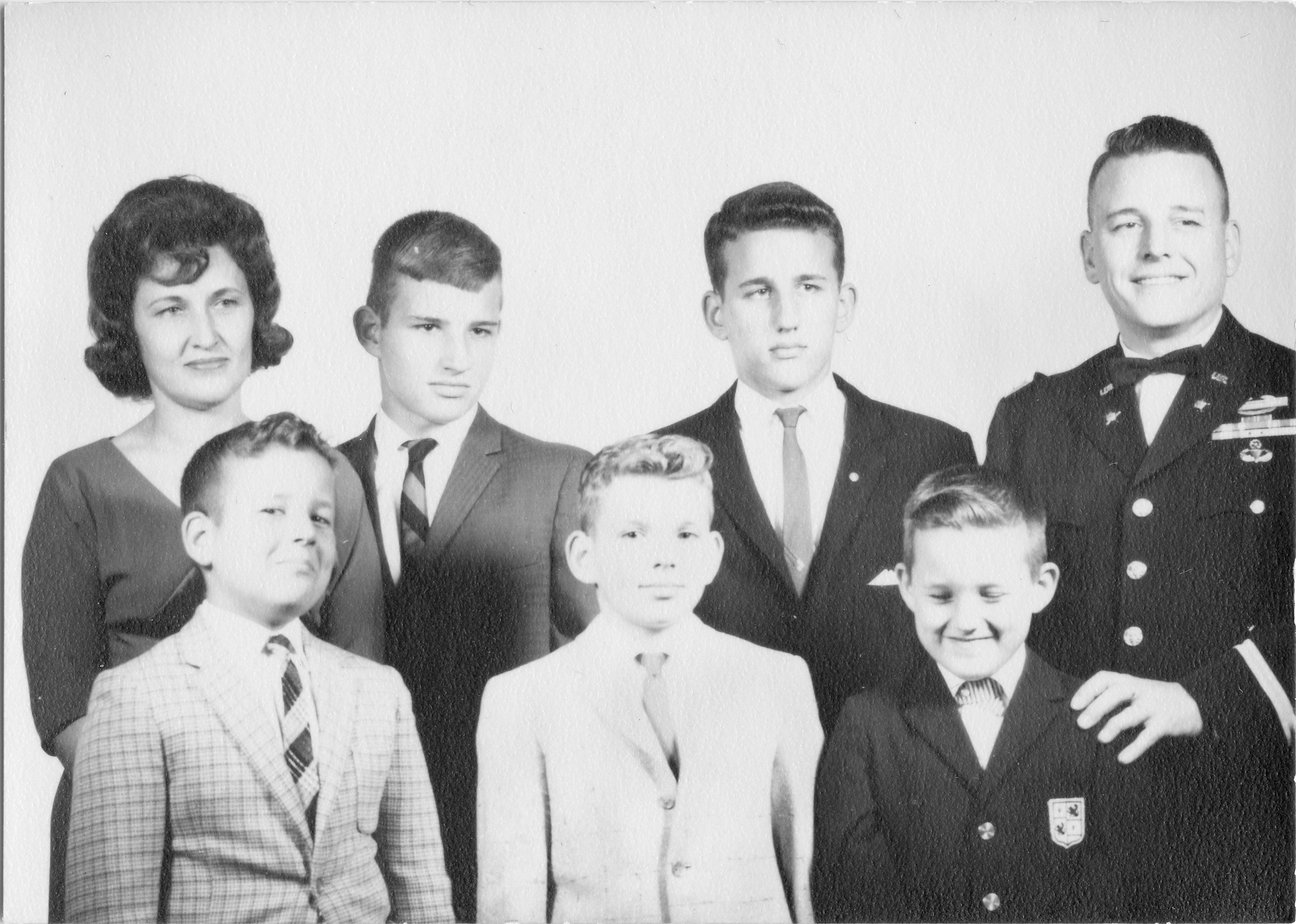 Lt. Col. Bernard W. Dibbert and his wife, Ann, and their five sons: front row from left, Charles, Michael and William; back row, from left, Bernard Jr. and Doug.

The endowed fund will benefit dependents through the Carolina Covenant.

When Army Maj. Bernard W. Dibbert deployed to Vietnam in 1965, he sent cassette tapes home to his wife, Ann, and five sons in Fayetteville. The Ranger and company commander with the 82nd Airborne Division at Fort Bragg had graduated from the University of Washington, where he had an ROTC scholarship, and on those recordings he spoke adamantly about his sons also getting a college education. 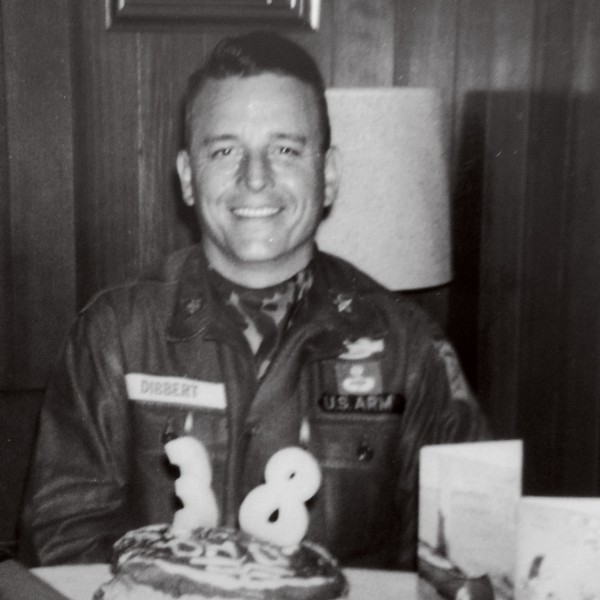 But the 38-year-old veteran of World War II and the Korean War never got to see their achievements. He was killed in action on June 1, 1965. He also did not know his promotion to lieutenant colonel had been approved the previous day.

Now the General Alumni Association is honoring the Army officer and his son Doug, president of the GAA, with a $2 million gift to UNC to provide scholarships for students from military families.

The Lt. Col. Bernard W. Dibbert Carolina Covenant for Military Families Endowed Scholarship Fund will aid military-affiliated students eligible for the Carolina Covenant, which provides UNC students from low-income families the opportunity to graduate without loan debt. The gift also was made as part of UNC’s For All Kind: the Campaign for Carolina and its Red, White and Carolina Blue Challenge to support families of military veterans. 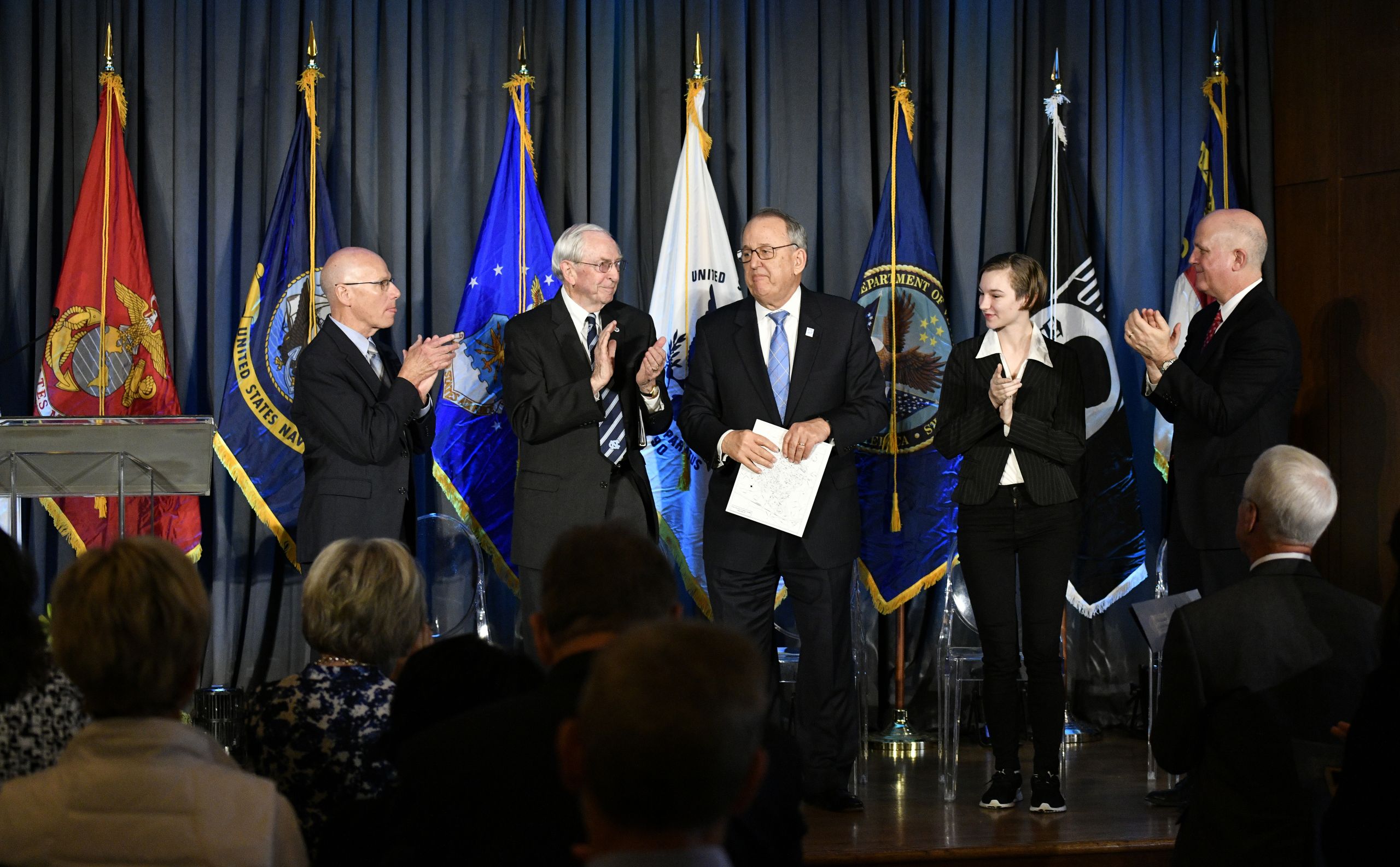 “I cannot think of anything our association’s volunteer leaders could do that pleases me more than to honor my father by ensuring that there will forever be Carolina Covenant students from military families with scholarships that bear my dad’s name,” said Doug Dibbert ’70. (Photo by Grant Halverson ’93)

“With this monetary gift, we will provide access to UNC for many deserving students who are members of military families,” said L. Ferguson “Ferg” Norton ’61 of Wilmington, chair of the GAA Board of Directors and a retired Navy rear admiral who was in Navy ROTC at Carolina.

The GAA’s Board of Directors approved the gift at its quarterly meeting in January, and the GAA announced it with the University today at the George Watts Hill Alumni Center.

Tom Lambeth ’57, chair of the GAA’s Tar Heel Network that advocates on behalf of the University’s interests and a former GAA board chair, said that in recognizing the service of Lt. Col. Dibbert — whose military honors included the Silver Star, Bronze Star with Oak Leaf Cluster, Purple Heart with Oak Leaf Cluster and the Army Commendation Medal — the gift intends to honor the outstanding service and leadership of Doug Dibbert as chief executive officer of the association since 1982.

“Doug’s leadership of the GAA is extraordinary,” Lambeth said. “Tangible and intangible evidence of that is all around.”

Lambeth also noted how the scholarships would create a legacy informing future students of how they benefit from the sacrifice of those that preceded them.

“This University and alumni association are much about today and tomorrow, but this is also a place of memory,” he said. “We would hope that these scholarships, as they honor those who have served in the military and support their families, would give special pause to remember those who, as did the soldier for whom they are named, gave their todays for the tomorrows of others, like those who live and work and dream here. Remember them.” 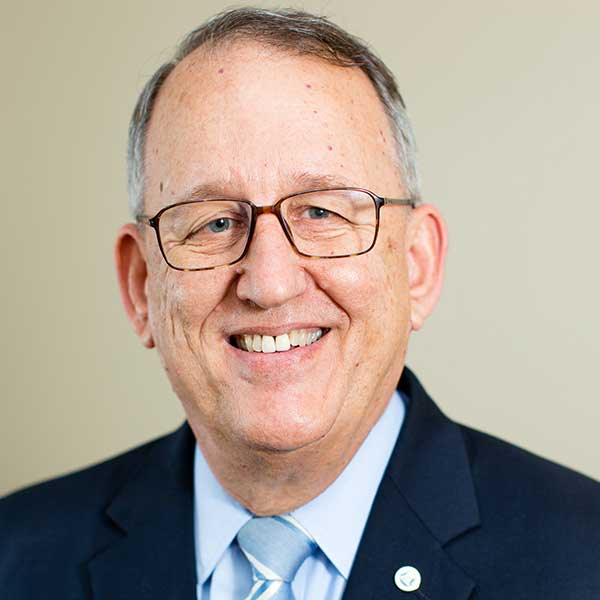 “Carolina remains proudly committed to access and affordability, which is especially important to military families,” Dibbert said. “I cannot think of anything our association’s volunteer leaders could do that pleases me more than to honor my father by ensuring that there will forever be Carolina Covenant students from military families with scholarships that bear my dad’s name.”

The scholarships will be administered by UNC’s Office of Scholarships and Student Aid. When fully funded, there will be up to 25 Dibbert Scholars on campus during each school year.

“Our students from military families have often been asked to go above and beyond the call, and we’re delighted and humbled to be able to support them in this way,” said Steve Farmer, vice provost for enrollment and undergraduate admissions. “The Red, White and Carolina Blue Challenge is just one the many ways we help deserving low-income students afford a world-class education. We’re grateful to the General Alumni Association for allowing us to join in honoring Lt. Col. Dibbert, and his son Doug Dibbert, in this way. I know that the students who receive Lt. Col. Dibbert’s scholarship will recognize his sacrifice and be proud to bear his name.”

“I think it in many ways provides the evidence of the importance of this great gift to give an individual, a young person, a chance that they may never have had otherwise, to do something that they otherwise would never have been able to do, with just the possibility of really making a difference in this world,” Blouin said.

“I don’t think that we could select a better cohort of students than those who have put their own lives on the line for this country, like your dad,” Blouin said, addressing Dibbert on stage in Alumni Hall at the alumni center. “There is no greater testament to service than the service one gives when they go into the military and they defend not only the honor of this country, but they defend the freedoms that all of us enjoy every day of our lives.

“Your dad would be proud of you, Doug, mainly because of the fact that he dedicated his life to service, and you have, too. Service to this great state, service to this great University, and service to all of us, particularly the alumni, the over 300,000 alumni that have walked away from this University and represent us every day with the great works and the great impact they have.”

Kayleigh Olecki of Creswell, a sophomore majoring in computer science and Japanese, told the audience of more than 100 at the gift announcement that her father and grandparents had served in the military. The Carolina Covenant and the Red, White and Carolina Blue Challenge, she said, “have taken away the financial stress of today’s economy and all sorts of things and allows me to focus on what really matters, which is my studies and getting opportunities that are presented to me through UNC,” such as traveling to Japan to represent the U.S. in a program designed to build business ties.

The eldest of the five sons, Doug Dibbert was a high school junior when his father was killed in action. At UNC, he was elected to Phi Beta Kappa and graduated with a degree in political science. He worked on congressional and Senate staffs in Washington, D.C., before taking the GAA leadership post.

Among his professional activities, Dibbert has served on the Knight Commission on Intercollegiate Athletics, as president of the Council of Alumni Association Executives and as chair of the Council for Advancement and Support of Education. In 2015, he received the Frank L. Ashmore Award for service to CASE and the profession of alumni relations.

With Dibbert’s leadership, the GAA has had a deep commitment to scholarships; as of 2017, more than $1.25 million had been distributed among more than 700 students.

During Dibbert’s tenure, the GAA also has greatly expanded the scope of its services, programs and communications to inform and engage the University’s nearly 330,000 alumni. The GAA also raised more than $12 million to build the George Watts Hill Alumni Center, which opened in 1993, and donated the building to the University. 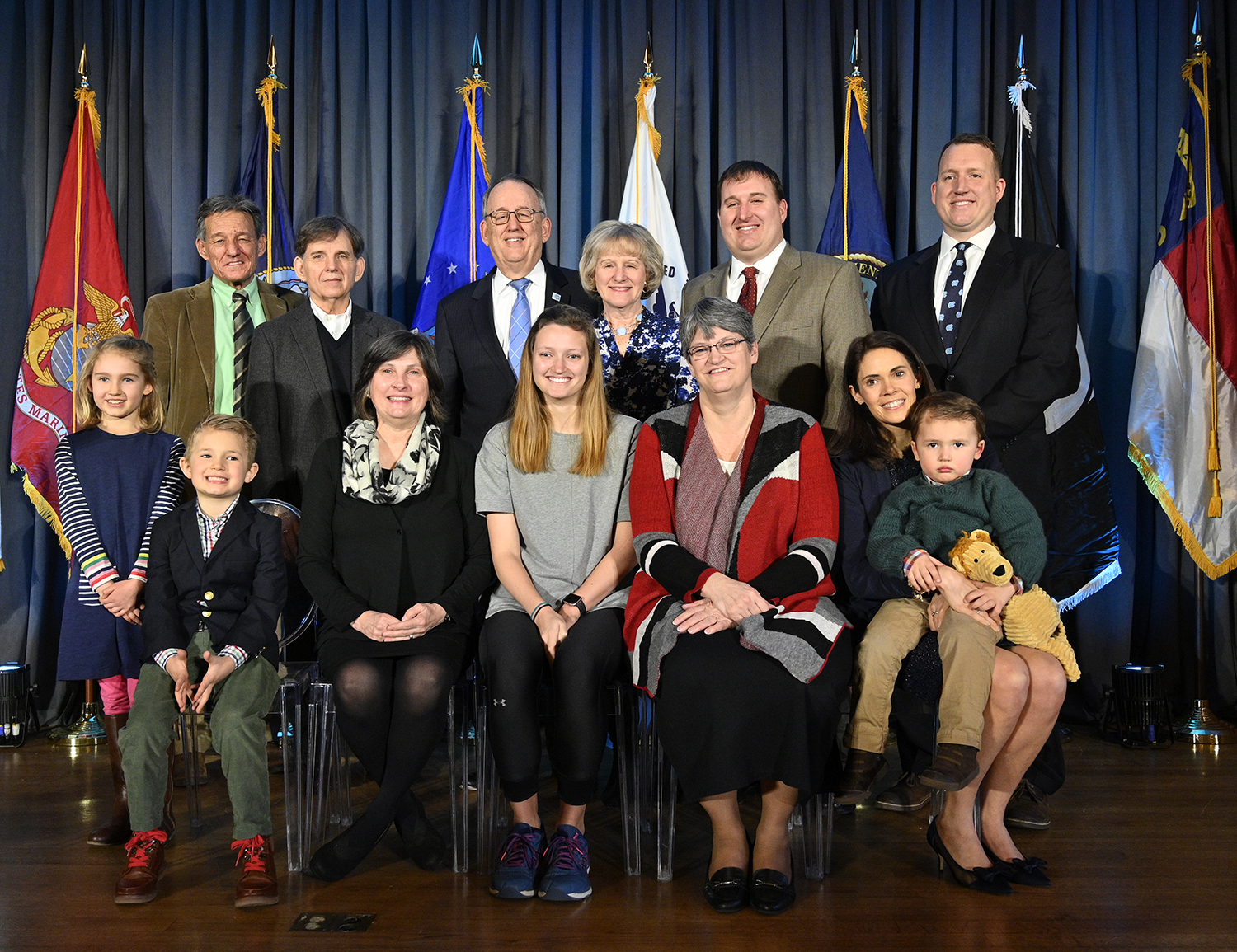 Doug Dibbert ’70 is joined by his wife, Debbie, and members of their family following the announcement of the Lt. Col. Bernard W. Dibbert Carolina Covenant for Military Families Endowed Scholarship Fund. (Photo by Grant Halverson ’93)

Established in 1843, the GAA has a history from its earliest years of making contributions to UNC. The association led a fundraising campaign for the campus monument erected in 1858 to honor the University’s first president, Joseph Caldwell.

The alumni association’s latest gift supports the most ambitious university fundraising campaign in the Southeast and in Carolina history, For All Kind: the Campaign for Carolina. In October 2017, Carolina announced its goal to raise $4.25 billion by Dec. 31, 2022. By the end of fiscal year 2018, the campaign had exceeded exceeding half of its dollar goal ahead of schedule. The Campaign for Carolina is inspired by the Blueprint for Next, the University’s overall strategic plan built on two core strategies: “of the public, for the public,” and “innovation made fundamental.”