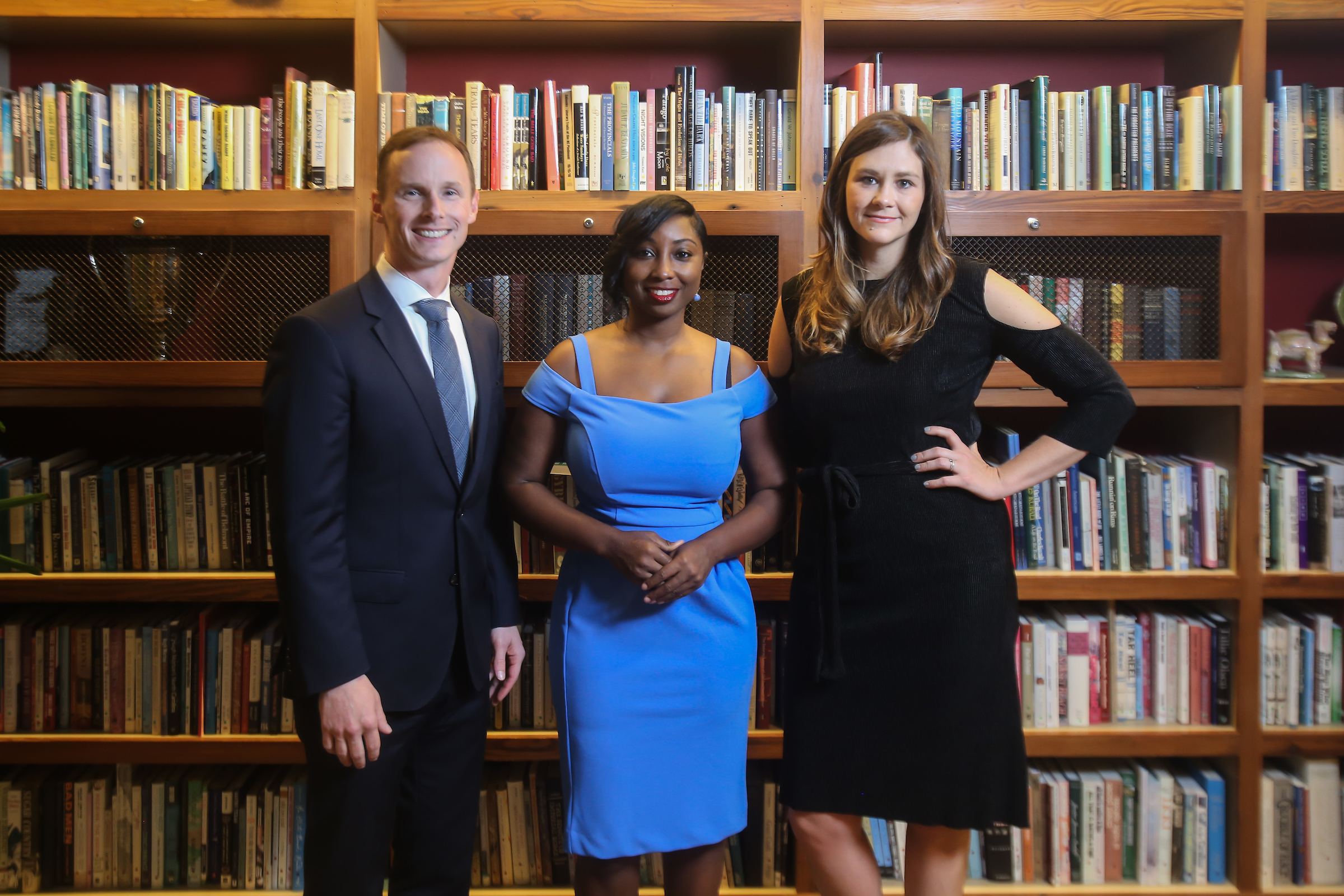 The GAA recognized a TV writer and playwright, the dean of one of the nation’s top business schools and a Wake County government leader with its Distinguished Young Alumni Awards on Friday. The 2018 recipients are: 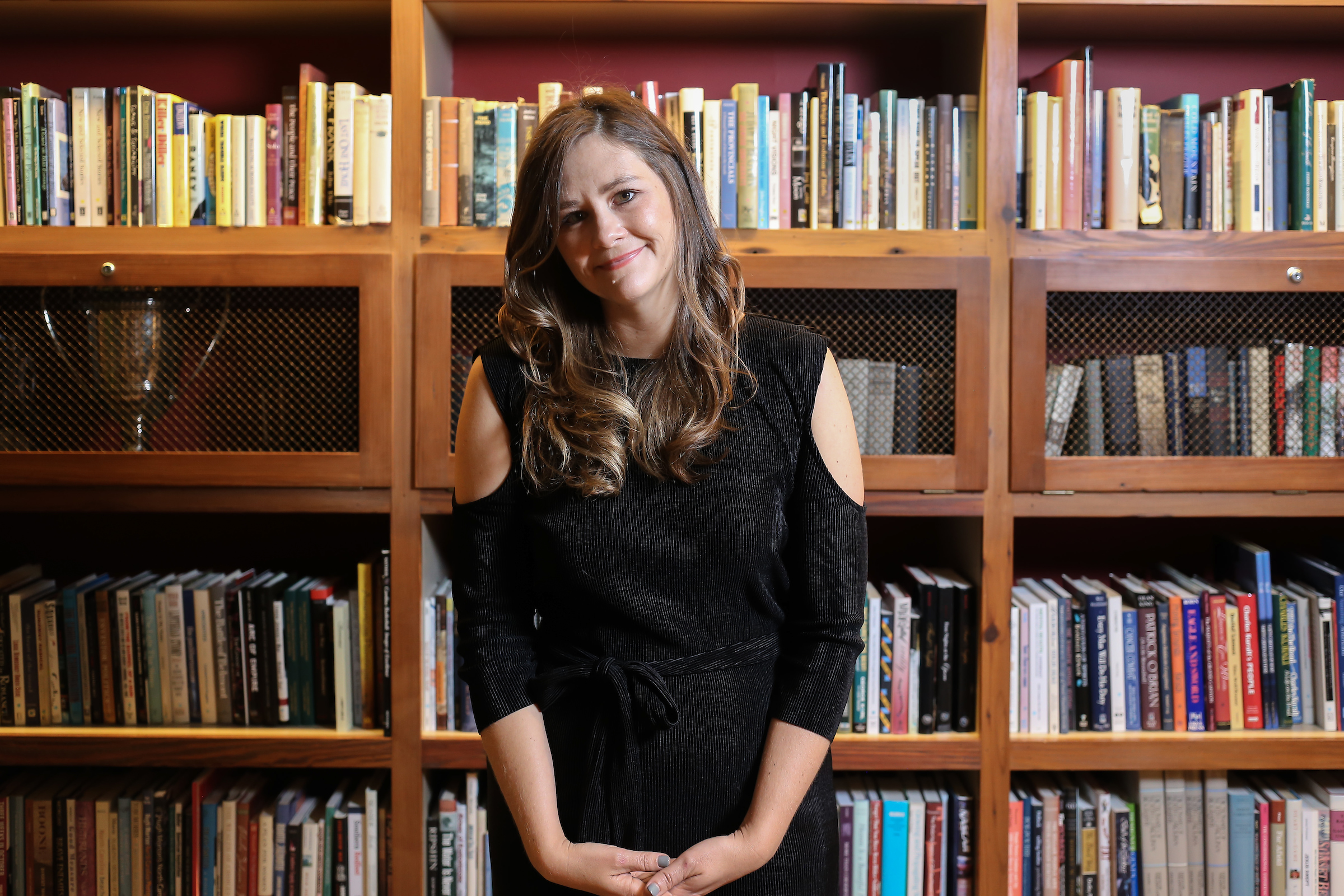 Brunstetter began writing plays as a dramatic art major at UNC, and after graduation enrolled in The New School’s School for Drama in New York. She took a corporate job but kept writing plays.

Her plays frequently draw inspiration from people and places back home in Winston-Salem. Her characters bridge some of the divide between her conservative Baptist upbringing and her views on life as she came into her own. Her play The Cake explores a conservative Christian woman’s dilemma when a longtime friend’s daughter asks her to bake the wedding cake for the young woman’s marriage to another woman. The play opened in Los Angeles in early 2017 and had its regional debut with Carolina’s PlayMakers Repertory Company that fall, while the U.S. Supreme Court deliberated over a similar case of a baker in Colorado who refused to bake the cake for a same-sex couple’s wedding.

“I’m sick of seeing conservative people dismissed and called idiotic and hateful when I do see love in that community,” Brunstetter told the Review (“Cake and Conversation,” March/April 2018). She said she wanted the audience to care for the baker and see her consider the idea of change, as well as “to show how difficult that is, but to also show it happening — so that it can tell a story of hope.”

Brunstetter landed her first staff TV job in 2012 and has written for some of the most popular and critically acclaimed shows, including American Gods and This Is Us, on which she also works as a producer.

She said she also tries to bring a sense of hope to the TV stories, even when the characters face tough times. “We just don’t ever want to be bleak,” she said. “The world is so dark right now, and we just don’t need our TV to remind us.”

Brunstetter also works to improve gender parity in her profession. She joined with other female playwrights and producers to found The Kilroys, which surveys hundreds of theater professionals every year to develop a list of plays by women that artistic directors can use in planning their seasons. She also participates in WriteGirl, a mentorship program for high school girls that matches aspiring writers with working writers. 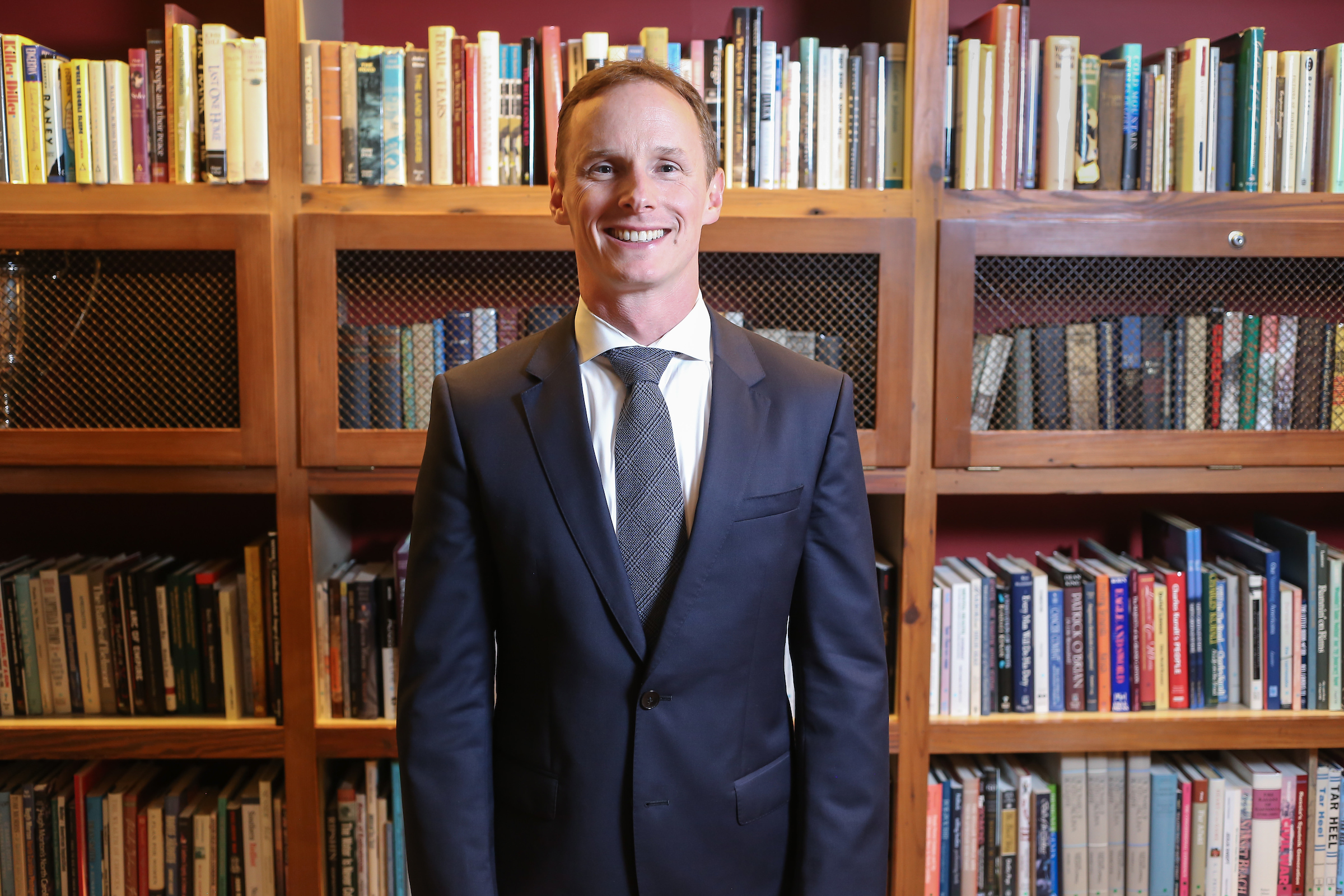 DeRue grew up in small towns in North Carolina, graduating high school in Wallburg, southeast of Winston-Salem. From there, he has risen to the top of the business and academic worlds as dean of the University of Michigan business school — as well as to the top of the world climbing some of its highest mountains.

DeRue summited Mount Everest in 2013, and he has taken business students to climb Mount Kilimanjaro as part of a team-building exercise. “The group dynamic of mountain climbing is fascinating,” he said. “You’re coming together with people you don’t know in a high-risk environment. You want to achieve this extraordinary thing, and you have to work together to do it.”

He has visited six of the seven continents and will check off the final one in December when he plans to go cross-country skiing in Antarctica to the South Pole. DeRue also travels the globe in his role as dean, connecting with alumni, their businesses and organizations that might be of interest to Michigan Ross students.

DeRue began his business career in private equity and management consulting with Merrill Lynch and what is now Monitor Deloitte. Sensing he could have the most impact at the intersection of business and education, he pursued a doctorate in business at Michigan State to develop his skills in research and quantitative analyses.

He joined Michigan’s Ross School in 2007 and took on several leadership roles, including associate dean for executive education, director of the Sanger Leadership Center and faculty director of the Emerging Leaders Program, as well as being a professor of management.  He is a co-author of Experience-driven Leader Development: Models, Tools, Best Practices, and Advice for On-the-Job Development.

He serves as a director of Equinox, trustee of the Conference Board and chairman of the William Davidson Institute, a nonprofit focused on economic and business development in emerging economies. He is also a managing partner at Rabun Group, an investment firm, and Chibor Angels, a venture capital investment group.

Focusing on the areas of management, strategy and leadership, DeRue  is popular with business students — who see themselves as risk takers and embracing challenges — because he has done what they aspire to do. He also inspires his business school colleagues to perform at high levels as a team — much like successful mountain climbers. 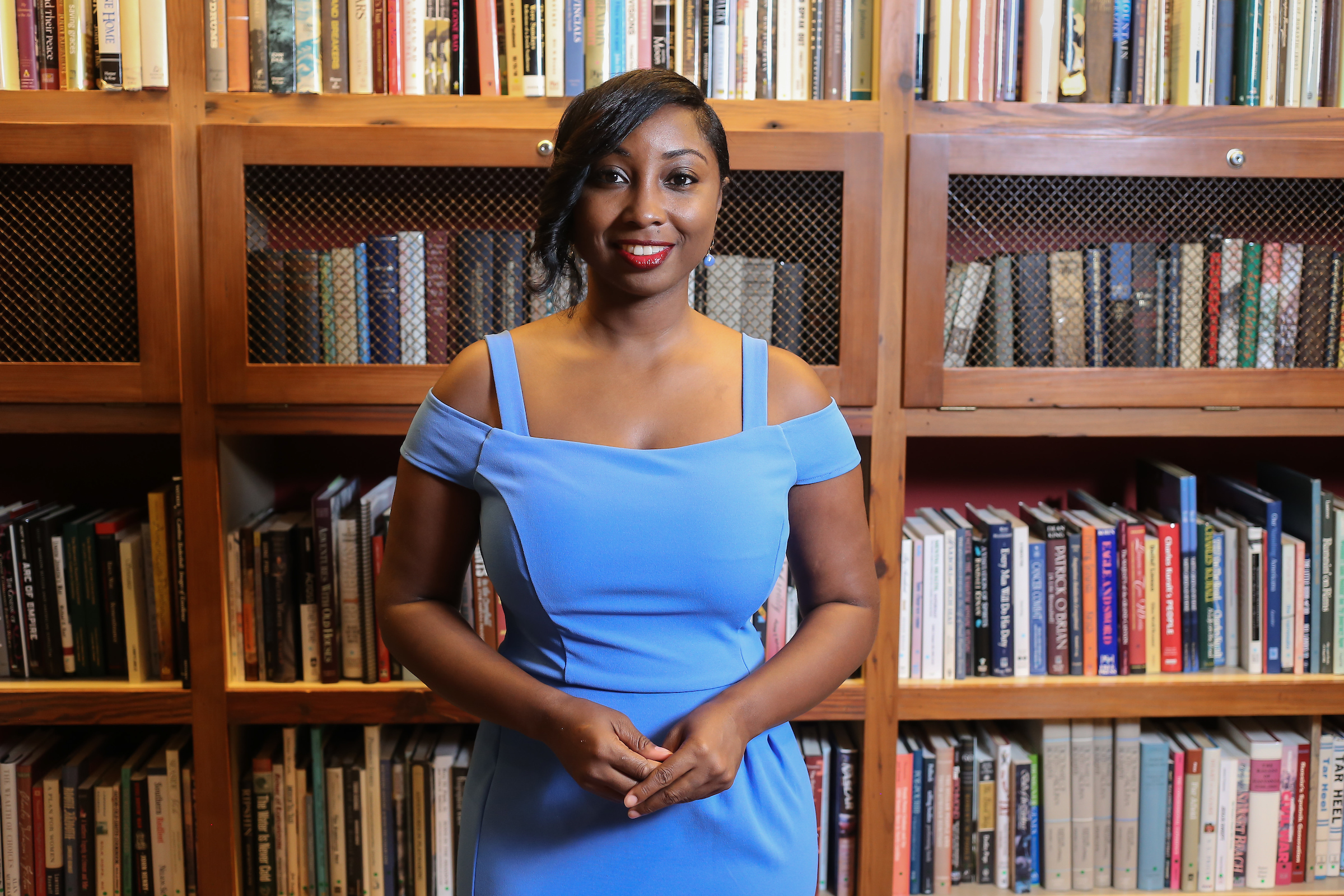 Holmes, attorney for the N.C. Association of Educators, in 2014 became the youngest commissioner elected in Wake County, at age 29. Two years later, her fellow commissioners elected her chair.

Holmes decided on a career in politics in the third grade, when a worker at a domestic-violence shelter in Wilmington where she, her mother and four siblings were staying took her to Washington, D.C., over winter school break. Standing in front of the Capitol, her chaperone told her, “This is where people make laws to help you and your family.” When Holmes learned that most members of Congress were lawyers, she recalled thinking: “That settles it. I’m going to be a lawyer.”

During her junior year at UNC, Holmes’ work-study placement was at UNC’s Center for Civil Rights, where prominent civil rights champions Julius Chambers ’62 (LLBJD), Ashley Osment ’87 (’95 JD), Jack Boger ’74 (JD) and Anita Earls took her under their wings. Holmes continued to work at the center during law school, and after passing the bar, she joined the Southern Coalition for Social Justice as a community organizer.

As a county commissioner, Holmes has sought to make government responsive to a broad spectrum of constituents facing personal and economic challenges. She secured county financial support for SmartStart to serve every low-income child on the waiting list for the early-childhood development program. She instituted food pantries in five high schools with the highest poverty rates to let teens and their parents discreetly shop for their families. The pantries were so successful, nine more schools added them. As a side benefit, school counselors can help parents who shop there connect with other services and update them on their children’s academic progress.

In an initiative called Ban the Box, Holmes advocated moving a question about criminal record from the first page of job applications to the end, so that employers wouldn’t automatically reject an applicant who had been arrested. She also pushed for job-skills training in the Wake County Jail.

Besides the Wake County SmartStart, Holmes has served on the boards of A Helping Hand, a nonprofit that assists the elderly and disabled, and the N.C. Foundation for Public School Children, where she recently finished a term as chair. She is a lecturer in N.C. State’s department of social work in the College of Humanities and Social Sciences, teaching about the legal aspects of social work.