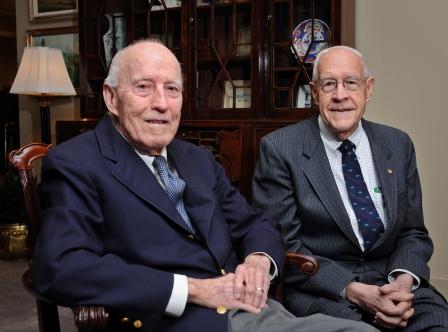 The GAA Board of Directors presented the awards to Fred Brooks Jr., who founded UNC’s computer science department, and Dickson Phillips Jr. ’48 (JD), who served as law school dean before becoming a federal appeals court judge. The award, established in 1990, honors faculty members who have performed outstanding service for the University or the association.

Brooks grew up in Greenville and earned his bachelor’s degree in physics from Duke and his master’s degree and doctorate in applied mathematics from Harvard. He spent his early career with IBM developing some of the company’s landmark mainframe computers. He was instrumental in advising IBM to locate a facility in the fledgling Research Triangle Park, signaling other companies that it was an important location for high-tech industries. He also encouraged developing computer hardware and software separately, helping lead to the growth of the software industry.

He came to UNC in 1964 to start its computer science department and was chair for 20 years. His 1975 book, The Mythical Man-Month: Essays in Software Engineering, is a computer science standard. In 2008, the University named its newest computer science building in his honor. Brooks, who continues to teach and advise doctoral students, has received the University’s Thomas Jefferson Award, recognizing a faculty member who through personal influence and teaching, writing and scholarship exemplifies Jefferson’s ideals.

Brooks has served on the National Science Board and on the Defense Science Board. His dozens of awards for advances in computer science include the National Medal of Technology, which he and two IBM colleagues received from President Ronald Reagan for work on the IBM System/360 mainframe; and the Turing Award from the Association for Computing Machinery, the highest honor in the computing field.

In 1960, the UNC law school recruited Phillips to the faculty, and Chancellor Bill Aycock ’37 (MA) — who also received his law degree from UNC in 1948 — appointed Phillips to be dean in 1964, a post he held for a decade that saw much unrest on campus. During the cafeteria workers’ strike in 1969, Phillips chaired a committee to decide a course of action and establish guidelines to address racial tensions on campus in general.

Phillips also served on the N.C. Courts Commission that reorganized the state judicial system and on the state ethics commission that reviewed financial interests of state employees in the executive branch and established rules for dealing with conflicts of interest. His honors from UNC include the Thomas Jefferson Award, Alumni Distinguished Professor, the Distinguished Alumnus Award and the law school’s Lifetime Achievement Award. He also received an honorary doctor of laws degree from UNC in 1985.

Phillips continued teaching at the law school until 1978, when President Jimmy Carter named him to the 4th U.S. Circuit Court of Appeals.