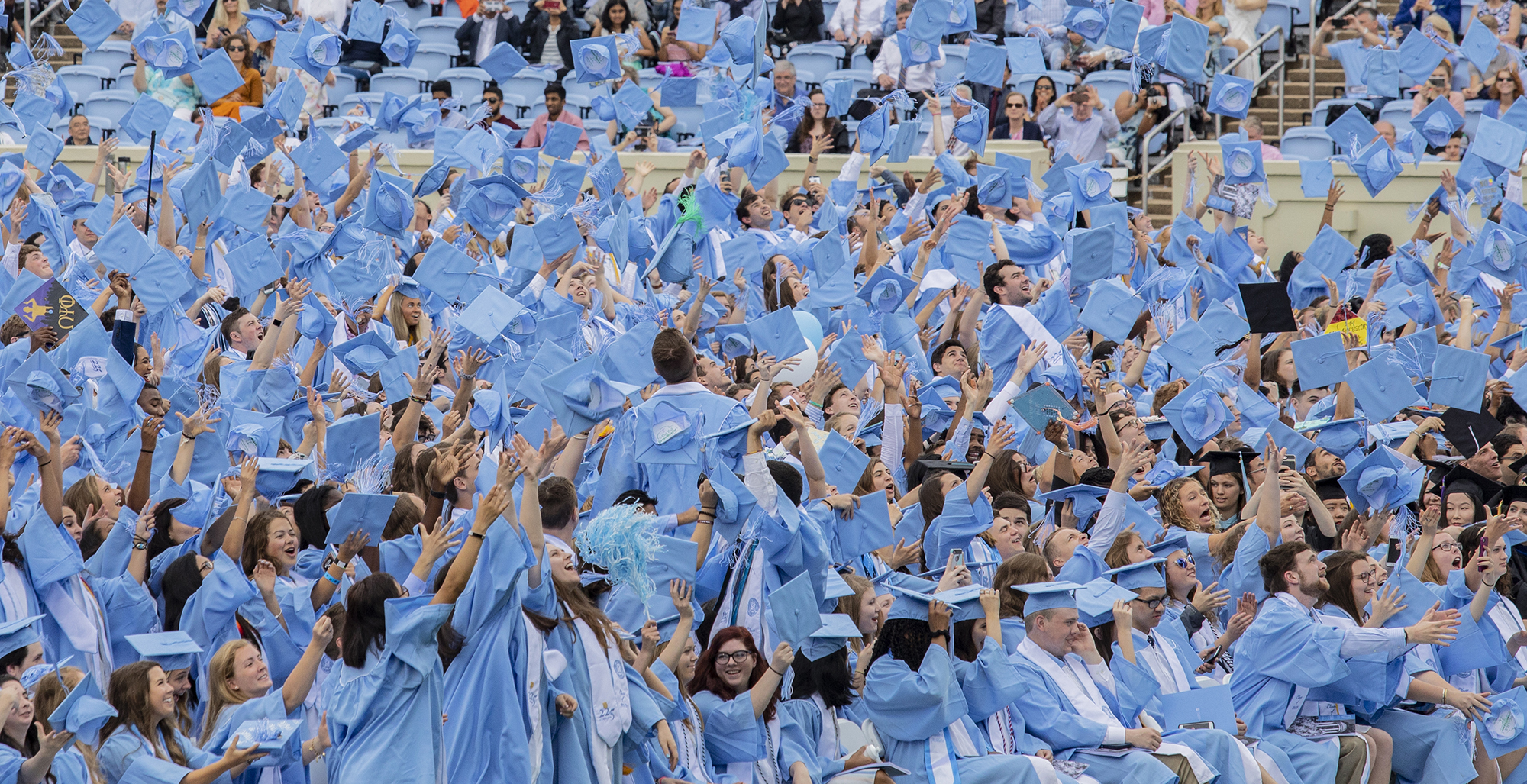 As more than 6,000 Tar Heels participated in Carolina’s graduation ceremony on Sunday, they were challenged to find not just their careers but their callings and to ask themselves what they are uniquely wired to do.

Jonathan Reckford ’84, CEO of Habitat for Humanity, delivered the Commencement address for the class of 2019. He spoke to a crowd of more than 33,000 graduates, family members, professors and friends at Kenan Stadium. 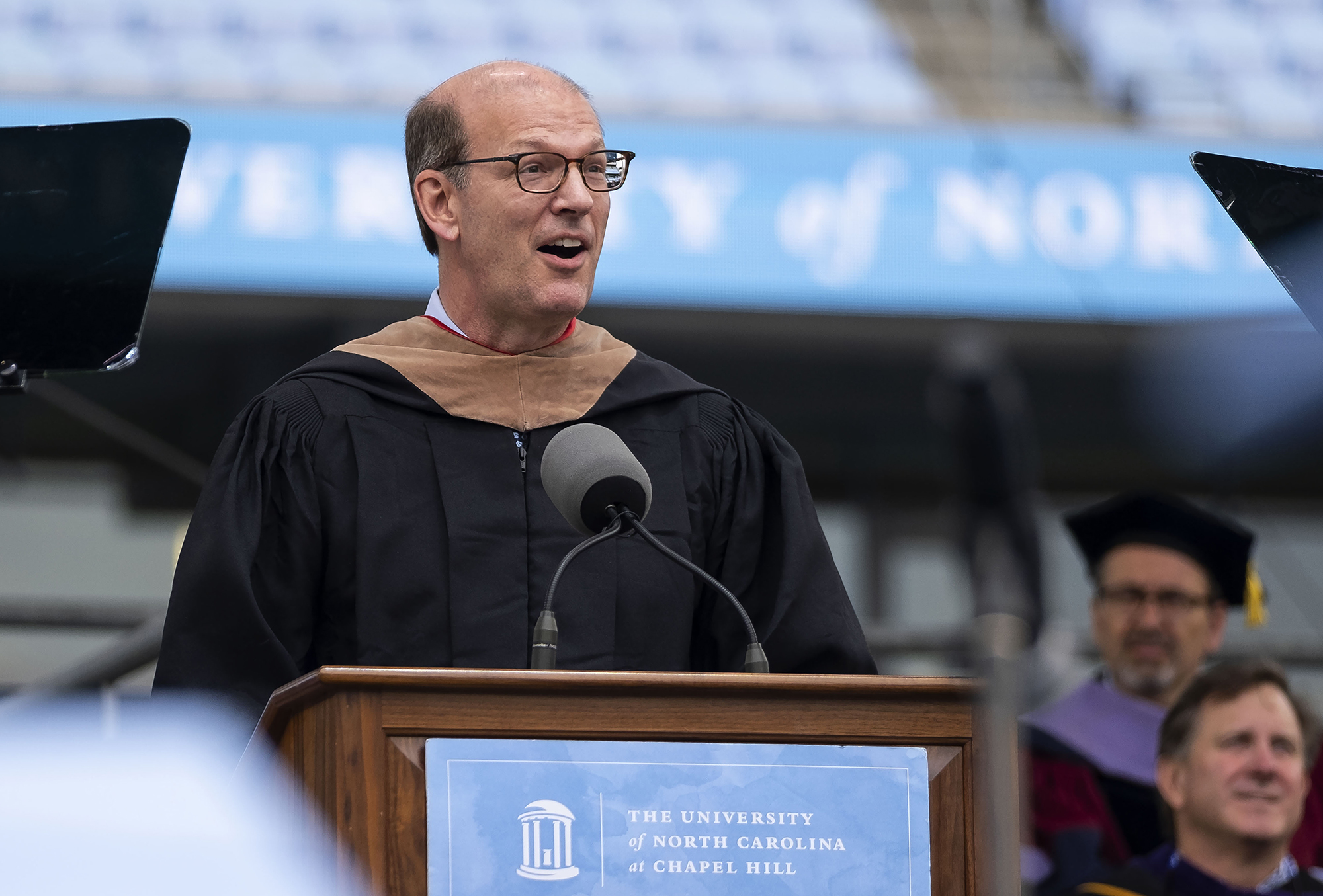 Jonathan Reckford ’84, CEO of Habitat for Humanity, delivered the Commencement address for the class of 2019 (UNC/Jon Gardiner ’98)

“I’m asking you to think about how you will find your purpose — how you will discover, as theologian Frederick Buechner describes it, where the deep gladness of your heart and the world’s great need meet,” he said.

In his charge to the graduates, Guskiewicz urged them to collaborate; to be patient and deliberate; and to let integrity “illuminate your path and be your impulse for good.”

Reckford imparted lessons from his own experience as a pastor, a world traveler and now as the top executive at Habitat for Humanity. He encouraged graduates to reflect on how their Carolina experience has prepared them to take action and address the world’s challenges.

Reckford told the audience that Chapel Hill will always be his home. The son of a longtime classics professor at Carolina, Reckford grew up in a house on Franklin Street. His wife and son both graduated from Carolina and his daughter will start at UNC in the fall. 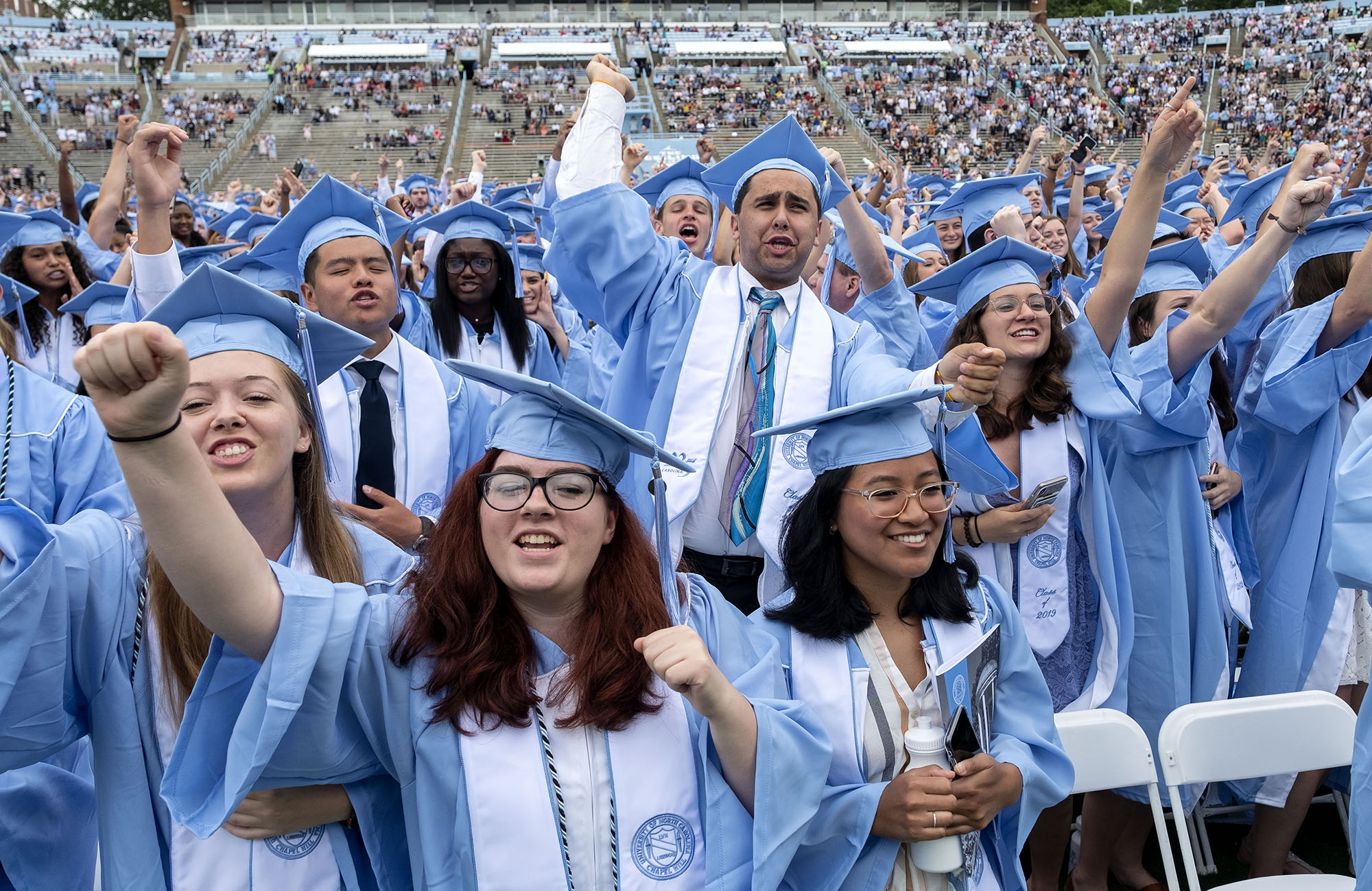 In his charge to the graduates, Guskiewicz urged them to collaborate; to be patient and deliberate; and to let integrity “illuminate your path and be your impulse for good.” (UNC/Jon Gardiner ’98)

“I’m pretty sure our blood is really Carolina blue,” he said. “So, I get to congratulate you not just as some guy making the Commencement remarks but as a proud fellow Tar Heel.”

Reckford noted that across the country, Commencement speakers are likely telling graduates to follow their passion. He joked that if he had followed his, he would have attempted a basketball career.

“Living in the dorm my sophomore year with two guys named Jordan and Worthy clearly reinforced the idea that talents and abilities don’t always match our passions,” he said.

Instead, he said, perhaps the right equation for finding your purpose, or what you are “uniquely wired to do,” is passion plus ability and a worthy cause.

He told the graduates that the next season of their lives is the time to learn as much about the world as they can, to get experience and “to struggle with the things that you can’t get out of your mind.”

“This is also a time for making decisions about who you will become. I am an adamant believer in strength of character,” Reckford said. “Ultimately, your success will be measured not by what you have achieved but by who you are. Who before what.”

He closed his remarks with his best wishes for all: “Godspeed, class of 2019, and go Heels.”

During the ceremony, the University awarded honorary doctorates to:

• Dr. Rebecca Hatcher Buckley ’58 (MD), the James Buren Sidbury Distinguished Professor of pediatrics and professor of immunology at Duke. Buckley’s research interests have been in the fundamental causes of genetically determined immunodeficiency diseases;

• John L. Sanders ’50 (’54 JD), professor emeritus of public law and government at UNC and two-time director of the Institute (now School) of Government. Sanders is noted for working with legislative commissions to reorganize state government, revise the state’s constitution and expand access to higher education. In 1992, he received the GAA’s Distinguished Service Medal; and

• Nelson Schwab III ’67, founding partner of Carousel Capital, a private investment firm that invests in southeastern U.S.-based companies. Schwab has served on numerous boards at Carolina, including the Board of Trustees (2001-09), which he chaired in 2005-07. In 2007, he received the GAA’s Distinguished Service Medal.

Ramesh Raskar ’02 (PhD) was the keynote speaker for the doctoral hooding ceremony. Raskar, who has 90 patents, directs the Camera Culture research group at the MIT Media Lab, where he is an associate professor. His accomplishments include co-inventing a camera that “sees around corners,” developing portable eye testing devices that are used in more than 90 countries and finding a method for “reading” through closed books.

He encouraged graduates to follow their passions with purpose and a plan — like GPS navigating a chosen path. “With a Carolina degree, we owe it to ourselves, our parents, our community and to the world, to do our part to make the world a better place,” he said.

• A “special, hard-earned day” for more than 250 doctoral graduates