Development Head Routh to Step Down

David Routh ’82, vice chancellor for development and the chief architect behind the University’s record...

In his first letter to alumni as “director of alumni affairs” in the September 1970... 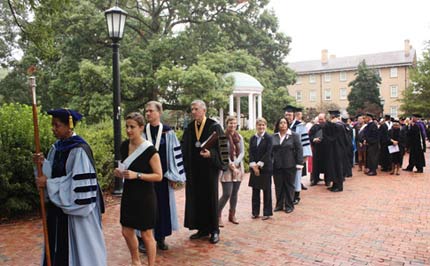 University Day marks the laying of the cornerstone of Old East, the nation’s first state university building, in 1793 and the beginning of public higher education in the United States. The campus first celebrated University Day in 1877.

This year marks the 40th anniversary of the 1971 consolidation of North Carolina’s public institutions of higher education under one governing body and president. Ross became the fifth president of the 17-campus UNC System on Jan. 1, 2011, and was inaugurated on Oct. 6 at N.C. A&T State University in Greensboro. 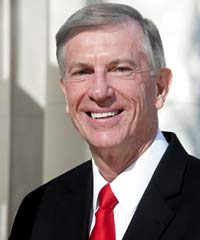 Ross also is featured in the September/October issue of the Carolina Alumni Review in a Q&A titled “an Investment in the Future.”

A native of Greensboro, Ross earned a bachelor’s degree in political science from Davidson College in 1972 and graduated with honors from Carolina’s law school in 1975. After a short stint as an assistant professor at the UNC School of Government, Ross joined the Greensboro law firm of Smith Patterson Follin Curtis James & Harkavy. He left the firm in 1982 to serve as chief of staff in the Washington, D.C., office of U.S. Rep. Robin Britt.

The following year, at age 33, he was appointed to be the youngest N.C. Superior Court judge at the time, a position he held for the next 17 years.

In 1999, Ross was appointed director of the state’s Administrative Office of the Courts. Two years later, he became executive director of the Z. Smith Reynolds Foundation, and in 2007 he was named president at Davidson, serving in that role until he became head of the UNC System on Jan. 1.

Other University Day convocation highlights included the presentation of Distinguished Alumna and Alumnus Awards, a practice begun by the faculty in 1971 to recognize alumni who have made outstanding contributions to humanity.

This year, the University also granted the first Edward Kidder Graham Faculty Service Award, established by the Faculty Council to recognize outstanding service by a faculty member. David W. Owens ’72, who is Gladys Hall Coates Professor of public law and government, received the award in honor of his distinguished service to the state, the University and countless communities through his scholarly work and activism in the School of Government. Owens also earned his master’s degree in regional planning in 1974 and his law degree in 1975, both from UNC.

The award was named in memory of Edward Kidder Graham (class of 1898), University president from 1914 to 1918, who committed the University to public service by vowing to “make the campus co-extensive with the boundaries of the State.”

In keeping with a tradition of celebrating milestones on University Day, Carolina placed a marker on the stone wall between McCorkle Place and Franklin Street to commemorate the student protests that resulted in the overturning of the Speaker Ban Law in 1966. The marker recognizes the student leaders who spoke out against the law and organized the protests, especially Student Body President Paul Dickson III ’66.

A public unveiling ceremony was held at the marker’s site at 3 p.m., followed by a reception in the Johnston Center.