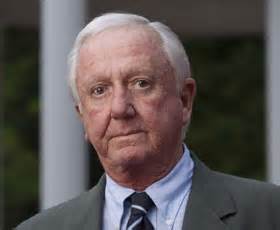 When someone makes a multimillion-dollar donation in your honor to a nonprofit — as Chip McAllister ’66 (MD) did when Jim Copeland retired as executive director of the Medical Foundation of North Carolina — you know your friendship matters as much as the nonprofit.

Chip has one overriding goal in life: Eliminate cardiac disease. Heart disease is the leading cause of death in the U.S. The internationally renowned cardiovascular pathologist knows his goal likely won’t be accomplished in his lifetime. The breakthroughs will come from future researchers, and he is making room for them at UNC. His financial support has created the McAllister Heart Institute in the UNC School of Medicine to bring young cardiac researchers to the University, in Jim’s words, “to advance what we know about heart disease through research, not treatment, not operating on patients.”

“It’s a lofty goal,” he added, “and Chip is using his own resources to help do it.”

Chip grew up in Lumberton, and his excursions in his canoe along the Lumber River helped define him. During his outings on the river, accompanied only by his Boston terrier, he learned to look closely; stay aware; see forms, shapes and values. Those experiences set the stage for a lifetime of careful observation, critical thinking and intense exploration and discovery. Chip explained all this to Amanda Hughes ’94, director of external affairs for the Ackland Art Museum, as he prepared to leave the Ackland much of his extensive personal art collection.

After earning an undergraduate degree from Davidson College and a medical degree from UNC, Chip began his Army career as an intern at Walter Reed Army Hospital, followed by training in cardiac pathology at the Armed Forces Institute of Pathology. He chaired AFIP’s cardiovascular pathology department until he retired from the military as a colonel in 1984. Immediately, the Texas Heart Institute recruited him to be founding chair of its cardiovascular pathology department.

Chip held clinical professorships at Baylor College of Medicine and the University of Texas Medical School. He wrote up his research in books, one of which is a classic in medical literature, and in journal articles. He developed a grading scale for cardiac rejection that became a model for the scale adopted by the International Society for Heart Transplantation.

Chip’s military discipline and meticulous adherence to science is tempered by his compassion as a physician. That extends to worthy causes. His first gift to UNC came in memory of his father, Hugh “Bo” McAllister Sr. ’35 (CMED). He called Dr. Bill Easterling ’56 (MD), who had filled in to cover Chip’s father’s ob-gyn practice in Lumberton while the elder McAllister recovered from a heart attack. Easterling introduced Chip to Jim Copeland, and their friendship began, as did the McAllister Professorship in obstetrics and gynecology.

Outside of medicine, Chip has developed an interest in art, particularly Southwestern art and pieces that express “the endless possibility of a life,” Amanda Hughes said. Two years ago Chip donated a heart-like bronze sculpture that welcomes all at the entrance to UNC Hospitals.

Chip has a second home, on a cliff in Monterey, Calif., overlooking the ocean, where he can watch whales migrating. His interest in conservation, particularly marine life, grew from those boyhood canoe trips. Now that he is retired, he serves on the international board of the World Wildlife Federation and co-chairs its marine life committee.

At UNC, he has served as president of the Medical Alumni Association, on UNC’s Board of Visitors and on the executive committee of the Medical Foundation of North Carolina. In 2013, Chip received the Davie Award, the highest service award given by UNC’s trustees.

His loyalty to UNC remains strong, and he is an avid Tar Heel fan. His home in Houston has a Carolina room, with pictures and artifacts that remind him daily of his Tar Heel roots.

But his driving focus is on eradicating diseases of the heart.