Someone was missing from a photograph this magazine published 18 years ago. Floyd McKissick Sr. ’51, Kenneth Lee ’52 (LLBJD), Harvey Beech ’52 (LLB) and James Lassiter ’55, dressed in suits and huddled together, likely...

Time of Sacrifice: The War in Europe, the Pacific and Chapel Hill

We have never had a simultaneous global leadership stress test like this — one that is testing leaders from the schoolhouse to the White House and from city halls to corporate suites. Everyone will... 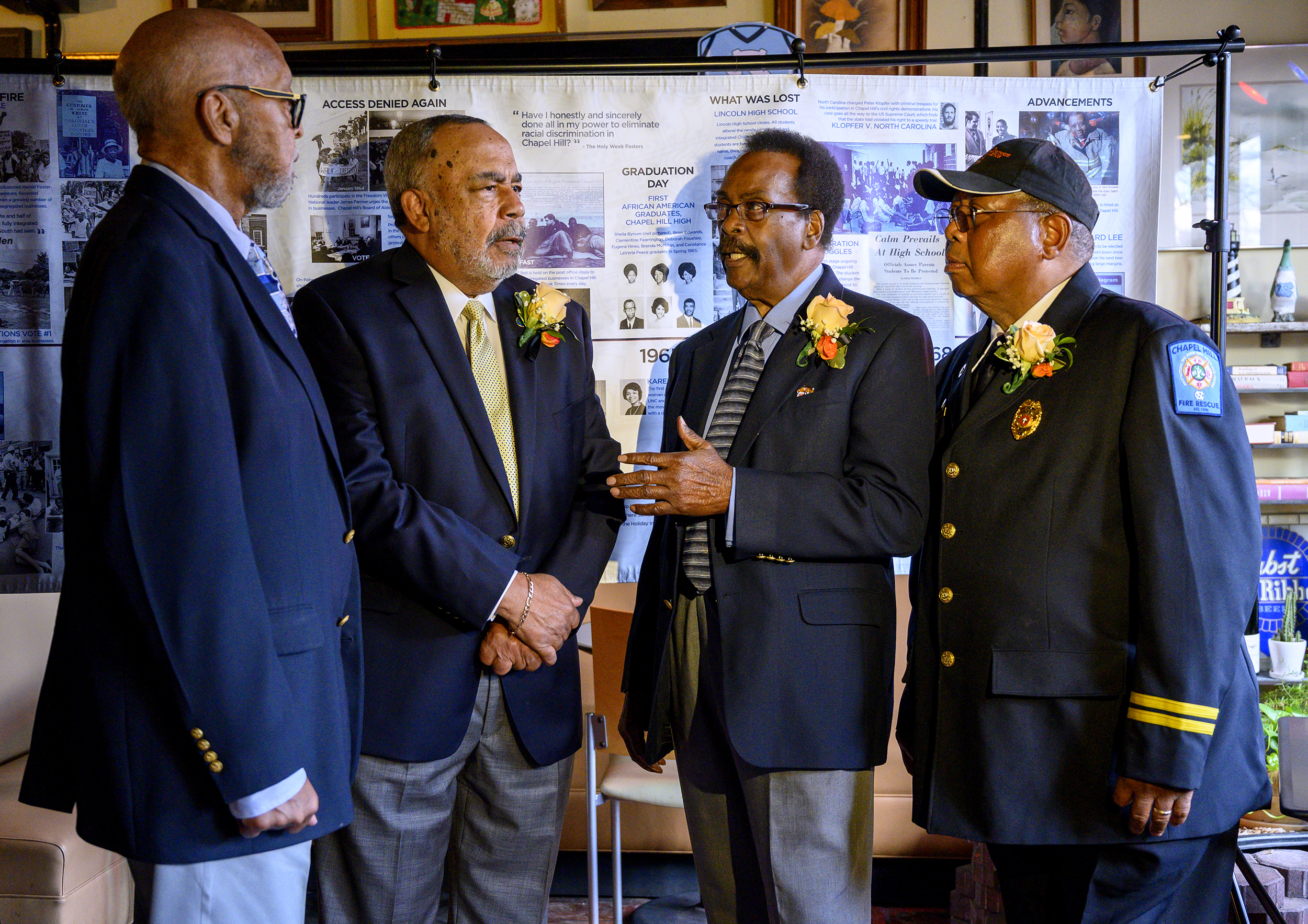 The four surviving members of the Chapel Hill Nine, from left, Douglas “Clyde” Perry, James Merritt, David Mason Jr. and Albert Williams talk during the dedication of a monument to their protest in 1960. (Grant Halverson ’93)

Toward the end of “Letter from a Birmingham Jail,” one of Martin Luther King Jr.’s best-known works, there’s a bit of prophecy.

“One day the South will recognize its real heroes,” King wrote. “They will be the young high school and college students, the young ministers of the Gospel and a host of their elders, courageously and nonviolently sitting in at lunch counters and willingly going to jail for conscience’ sake. One day the South will know that when these disinherited children of God sat down at lunch counters, they were in reality standing up for what is best in the American dream.”

It took 60 years, but the prophecy has come to pass in Chapel Hill. 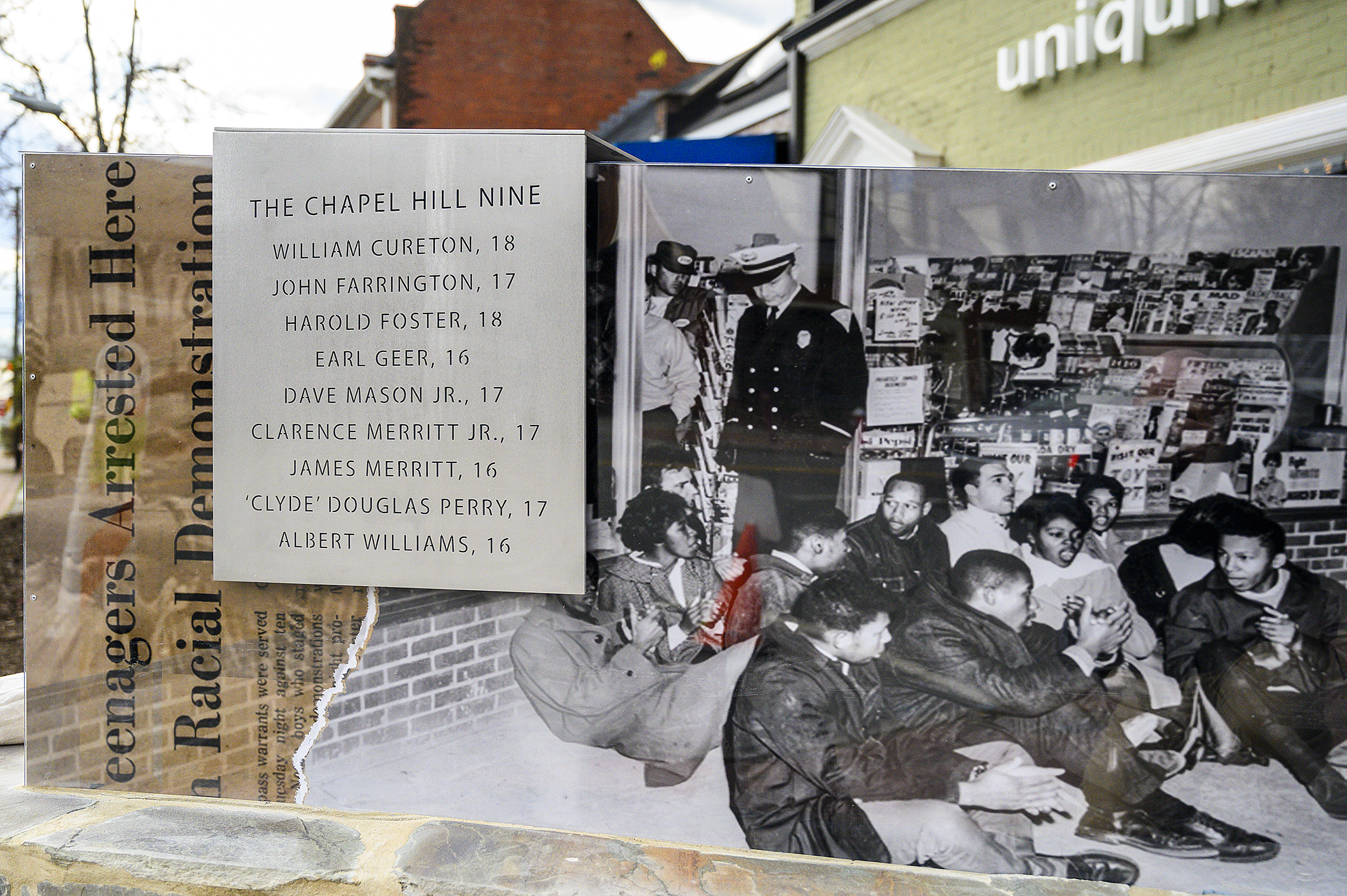 The men’s ages at the time of the protest are stamped next to their names on the new marker, which sits on a prominent patch of sidewalk in front of what is now West End Wine Bar. (Grant Halverson ’93)

On Feb. 28, in front of a cheerful, bundled-up crowd spreading across the blocked-off lanes of West Franklin Street, the town dedicated a stone monument to the nine African American high school students who were arrested in 1960 for trying to eat lunch at the Colonial Drug Store. The four surviving members of the Chapel Hill Nine, as they’re now called, looked on as former UNC Professor Reginald Hildebrand referenced that “Birmingham Jail” quote and reminded the crowd what an audacious thing it was to challenge the power structure in a deeply segregated town.

The Chapel Hill Nine were inspired by the Greensboro sit-in that began at a Woolworth’s lunch counter in February 1960. Led by college students at N.C. A&T who sat down at a dime-store lunch counter and politely asked for service, it became one of the most famous milestones of the civil rights movement. The Greensboro protesters drew national attention, won support from the NAACP and helped spur the creation of the Student Nonviolent Coordinating Committee later that year.

The students from all-black Lincoln High School never achieved that kind of fame. They weren’t supported by any national organizations or coached by any grownup activists. They didn’t make it into The New York Timesor put Chapel Hill on the civil rights map. The young men, ages 16 to 18, hatched the protest on their own and faced the consequences largely on their own.

“We didn’t know what was going to happen,” said Clyde Perry, who was 17 when he walked into the Colonial and declined to leave until the police escorted him out. “It was a terrifying experience.” He and his fellow protesters ultimately would stand before a judge, charged with trespassing, and agree to pay $10 fines. 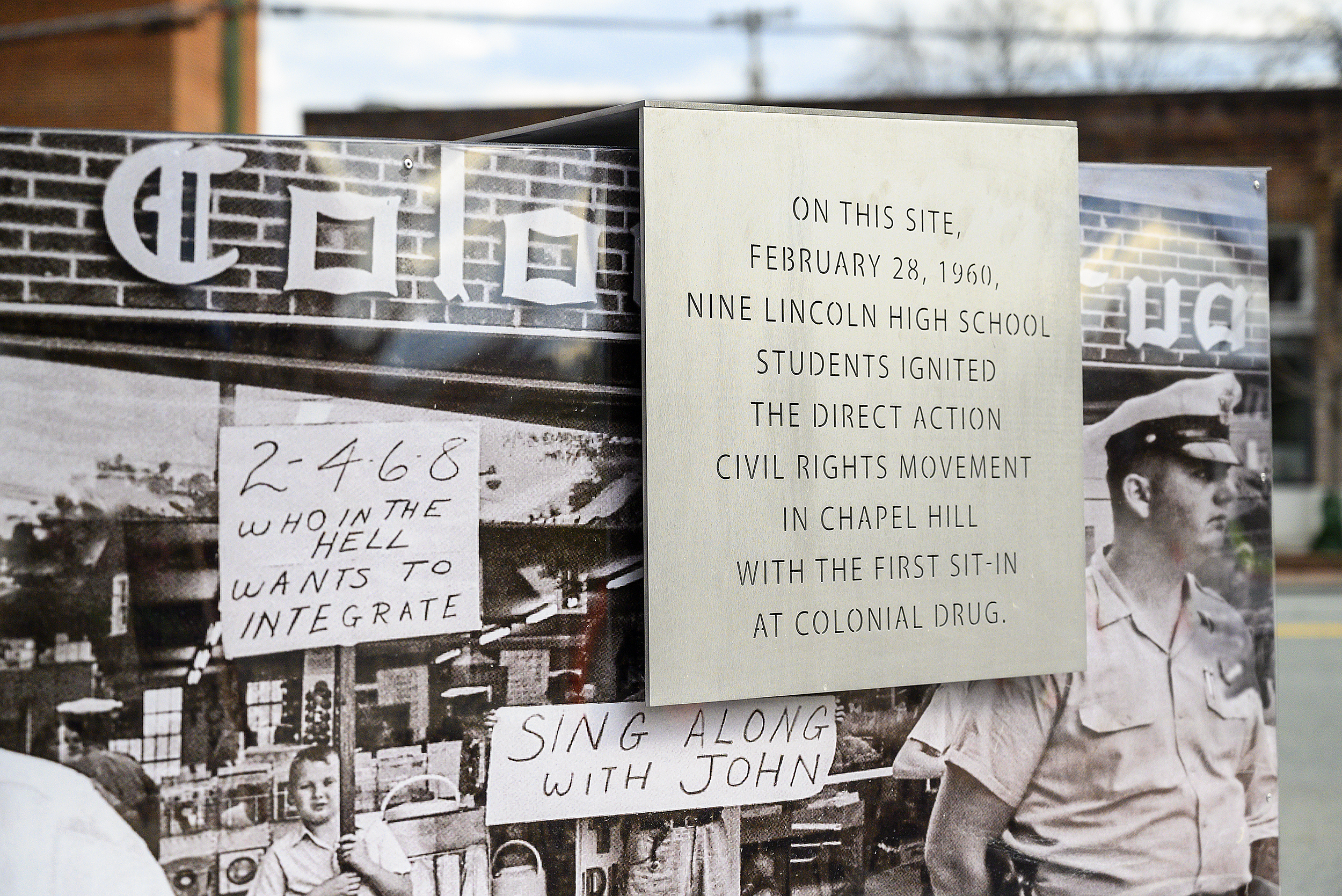 The Chapel Hill Nine were inspired by the Greensboro sit-in that began at a Woolworth’s lunch counter in February 1960. (Grant Halverson ’93)

The lack of recognition bothered Danita Mason-Hogans, an oral historian with Duke’s Center for Documentary Studies. Not just because she’s a seventh generation Chapel Hill native who cares about the town’s history but because her father is Dave Mason, one of the nine.

“It took young people to really make a move, to be brave enough to initiate a change,” Mason-Hogans said. “And young people too often get left out of the narrative. That’s why the members of the Chapel Hill Nine want to make sure people know how old they were when all of this happened.”

The men’s ages at the time of the protest are stamped next to their names on the new marker, which sits on a prominent patch of sidewalk in front of what is now West End Wine Bar. It’s one of the many details Mason-Hogans helped direct as a leader of Chapel Hill’s Historical Civil Rights Commemorations Task Force, a group convened by Mayor Pam Hemminger in fall 2017.

Mason-Hogans, who also is a member of the University’s Commission on History, Race and a Way Forward, said the focus on campus history too often overlooks the work of town residents in the Civil Rights era. It’s telling, she said, that the spark for Chapel Hill’s sit-in movement originated not with college activists but with a self-organized band of local high schoolers.

“Stories like this have been greatly undertold,” she said. “The history of Chapel Hill has always been hidden under the larger shadow of the University. And it’s really time for the University to recognize its own history.”

A small number of students and faculty from Carolina eventually would join the picket lines sparked by the Chapel Hill Nine; it would be years before local businesses desegregated.

“The young activists encountered little of the reputed liberalism long associated with UNC,” Marcie Cohen Ferris wrote in her 2014 book, The Edible South, which recounts the history of the lunch counter protests. “National leaders of the civil rights movement imagined that Chapel Hill would lead the fight and become the first southern town to desegregate its restaurants. This was not to be the case. … Chapel Hill remained a small southern town ruled by white conservatives throughout the civil rights struggle, and university administration followed in lockstep.” 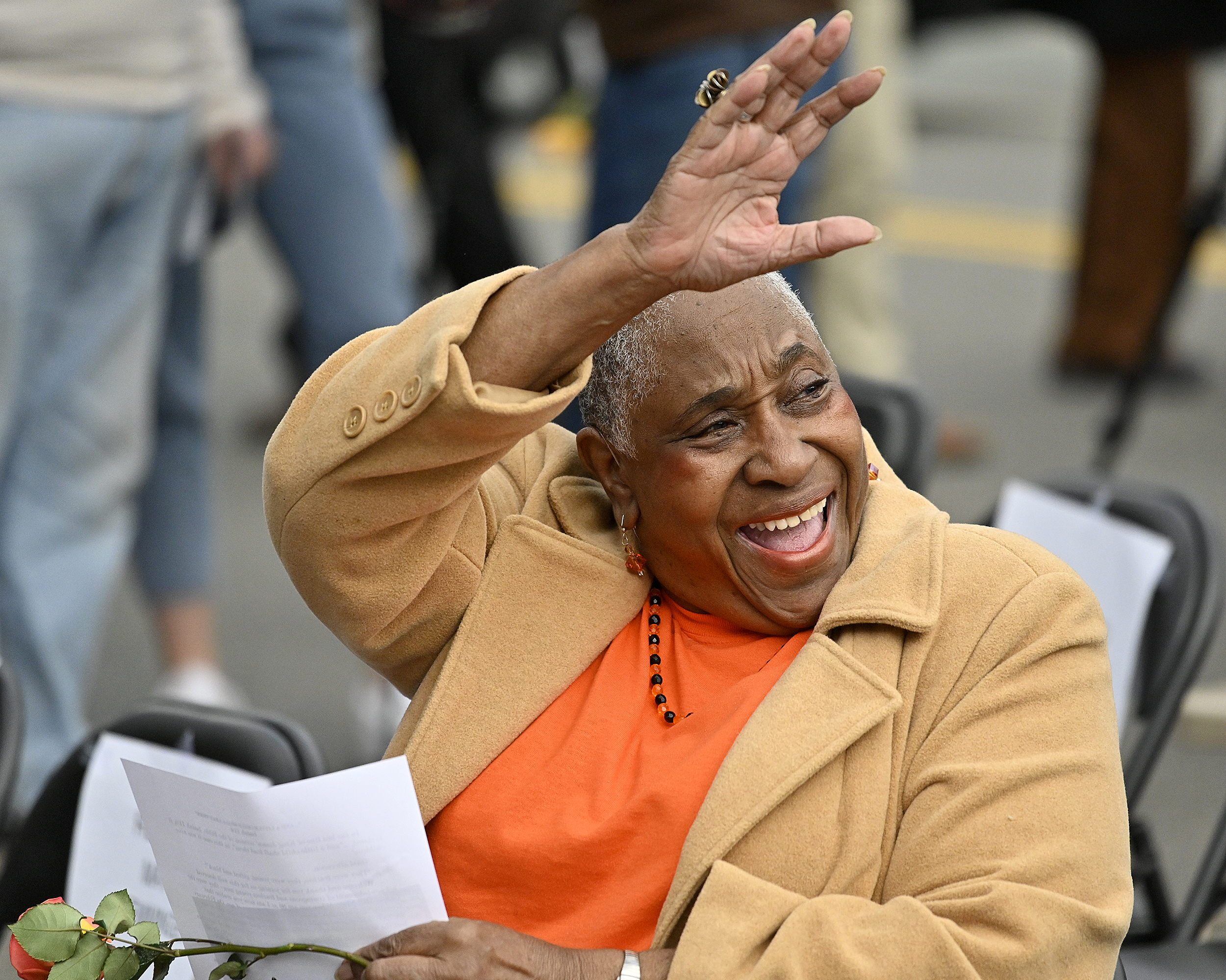 One of the speakers at the Chapel Hill Nine commemoration was Esphur Foster, a longtime resident of the Northside neighborhood and sister of Chapel Hill Nine member Harold Foster. (Grant Halverson ’93)

Better late than never, Clyde Perry said at the ceremony. He struggles to explain to young people today what the town was like during his teenage years. “The things that happened then — it’s hard to make people believe it now,” he said. “They used to call this the southern part of heaven. It’s finally living up to that now.”

Or at least getting closer. One of the speakers at the Chapel Hill Nine commemoration was Esphur Foster, a longtime resident of the Northside neighborhood and sister of Chapel Hill Nine member Harold Foster; her work over 21 years on the staff of UNC’s law school led to her receiving the GAA’s Distinguished Service Award in 1997. The work her brother kick-started more than 60 years ago is far from done, she said. “We remind you that the tussle continues.”