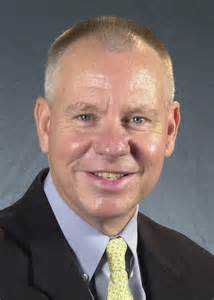 Lowry Caudill ’79 embodies the Tar Heel version of a Renaissance man: He excels in science, business and fundraising; he is the go-to guy for help in athletics and on search committees; and he has earned the respect of his colleagues as chair of the Board of Trustees.

He listens more than he talks, and when Lowry talks, people listen.

“His ability to draw consensus sets him apart,” said Dwight Stone ’73, a fellow trustee who also serves on the board of the UNC Educational Foundation with Lowry. “Very few people have the support in so many different arenas as Lowry does.”

Lowry came to UNC at the recommendation of his Shelby high school science teacher, Dick Hamrick ’66, who also earned a master’s degree from Carolina in ’72. Hamrick got Lowry excited about chemistry and was the first in what became a network of Tar Heels to shape Lowry’s career. At Carolina, Lowry conducted research under Royce Murray, who steered him to one of Murray’s former doctoral students, Mark Wightman ’75 (PhD), at Indiana University. Wightman and Lowry later returned to UNC.

After earning his doctorate in analytical chemistry at Indiana, Lowry worked for Glaxo in the Triangle. In 1991, he and a colleague, Al Childers, started Magellan Laboratories, a pharmaceutical development company, growing it to a business of more than 700 employees with offices in California and Research Triangle Park. In 2002, Lowry and Childers sold Magellan to Cardinal Health.

In 2006, UNC launched a minor in entrepreneurship, and Lowry was recruited to teach an introduction to entrepreneurship course. He also created and co-taught a scientific ventures course with Holden Thorp ’86 and, more recently, with Joe DeSimone. He continues to teach both courses and co-teaches the Chancellor’s Faculty Bootcamp. He also is an adjunct faculty member of the chemistry department.

And that’s only a small part of his involvement with the University. Lowry chairs the Chancellor’s Innovation Circle, which created the Innovate@Carolina Roadmap in 2010; he chaired the search committees that selected Athletics Director Bubba Cunningham and Vice Chancellor for University Development David Routh ’82, and he was on the search committee that hired Barbara Entwisle, vice chancellor for research.

Lowry was one of the first people recruited for the chemistry department’s External Advisory Board at the turn of the century, and he still serves on it. He belongs to the Advisory Working Group for the Entrepreneurship Minor and chairs its fundraising campaign. When it comes to raising money, he chaired the private fundraising steering committee for the Physical Science Complex, and he served on the steering committee for the Carolina First Campaign. He helped with the task force that led to the creation of the Applied Physical Sciences Department, the first new basic science department at Carolina in more than 40 years. He is vice chair of the executive board of The Educational Foundation. In 2008, he received the University’s Distinguished Alumnus Award.

When a situation calls for tact and diplomacy, people turn to Lowry. “He looks for the good in a situation,” Dwight Stone said. “But he’ll show his teeth when he needs to.”

Unassuming, substantive and smart is how fellow chemist Joe Templeton describes him. Lowry can follow beautifully and lead brilliantly without waving a “look at me” flag. “There are thinkers, and there are doers,” Joe said. “Lowry is both.”

Lowry said when he came to Carolina as an undergraduate, he got to see what a world-class lab looked like and to observe big-league research. That experience stayed with him, and he has ensured that others can be similarly inspired. Caudill Laboratories is named for him, and rumor has it he had something to do with there being a Royce Murray Hall in the chemistry complex. Templeton lists a dozen or so assistant professors who have come to UNC because of the excellent facilities.

Lowry’s entire immediate family bleeds Carolina blue. He met his wife, Susan Self Caudill ’80, at Carolina. Two of his three children are alumni, and his youngest just completed her sophomore year here.

Lowry attributes his success to being fortunate to be in the right place at the right time. Carolina is fortunate he has been, too.

As one of his colleagues said, “His fingerprints will be on the future of Carolina.”