UNC researchers, Chapel Hill community members and government leaders and family members of James Cates are the backbone of a committee formed to spend a year reviewing the events of a night in November 1970,...

The University’s Commission on History, Race and a Way Forward has recommended removal of two more names from campus buildings because of their ties to white supremacy violence. Commission members voted unanimously to recommend the... 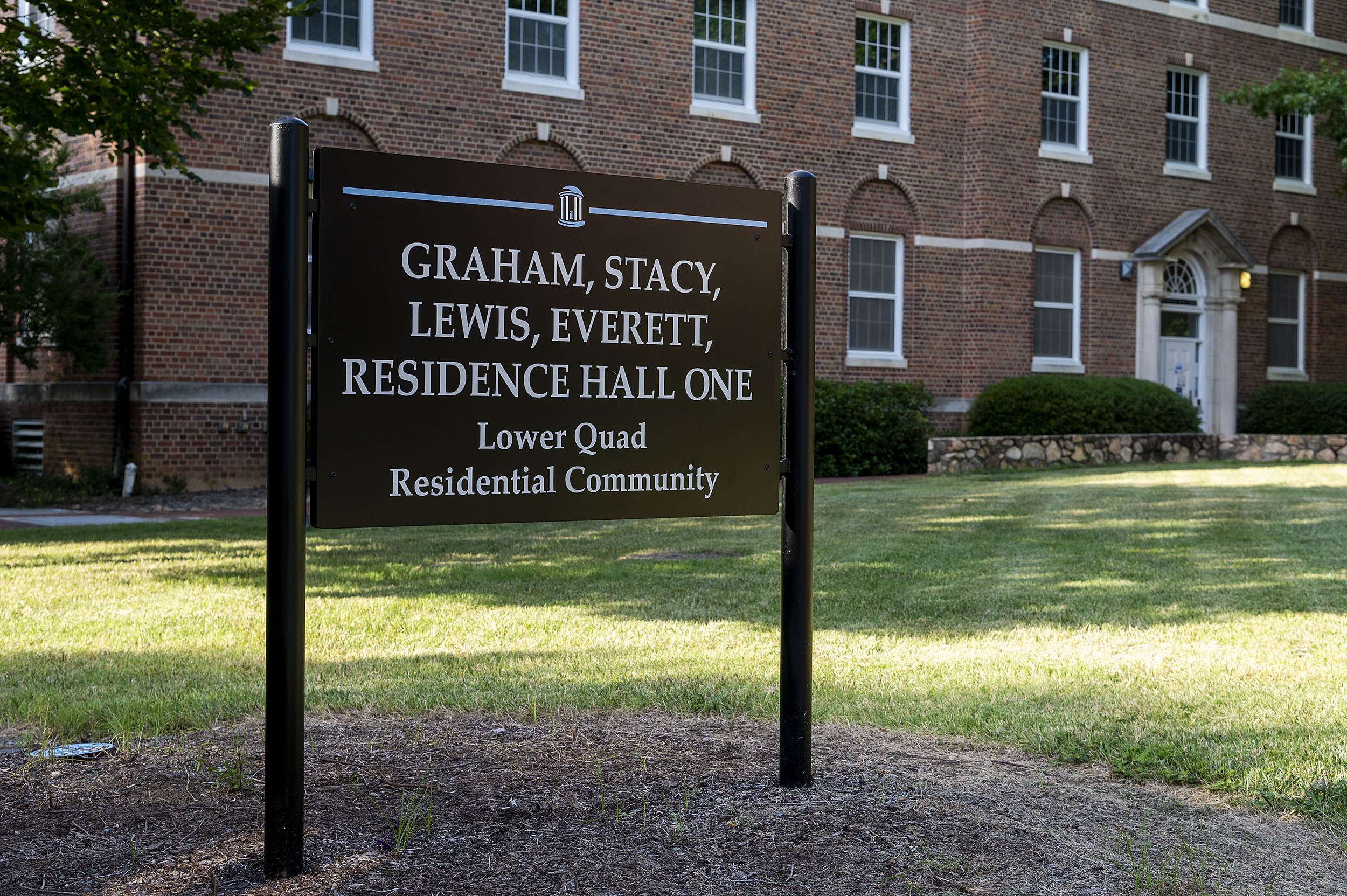 The University’s Commission on History, Race and a Way Forward recommended that John Washington Graham’s name be removed from the 96-year-old residence hall on what used to be called the Men’s Lower Quad. (Grant Halverson ’93)

“We have another dossier …”

Jim Leloudis ’77 (’89 PhD) thus introduced to the University’s Commission on History, Race and a Way Forward another person honored with his name on a campus building whom research revealed had ties to white supremacy.

The commission on Thursday recommended to the chancellor that John Washington Graham’s name be removed from the 96-year-old residence hall in a five-dorm cluster that used to be called the Men’s Lower Quad.

It is the seventh such recommendation. Four names already have been taken away this year; Graham’s makes three that are awaiting a decision by Chancellor Kevin Guskiewicz and, if he concurs, then the trustees. The commission has two new dossiers to read and has faculty-initiated requests to investigate two other people — one of them the president of UNC for 15 years.

The commission has a working list of 43 namesakes, most of whom were slave owners and a smaller group who figured in white supremacy activities in North Carolina and elsewhere in the South in the period between post-Civil War emancipation through the Jim Crow movement of the early 20th century. The list is on the commission’s website, historyandrace.unc.edu. Dossiers on individuals considered for name removal also can be found there.

Of Graham, Leloudis said, “In some ways, this may be the toughest of them all to talk about so far.”

According to the commission’s research, Graham:

• Directed Confederate troops who participated in the massacre of about 500 Black soldiers during the Battle of Plymouth in Washington County in eastern North Carolina;

• Championed white supremacy, was likely a Ku Klux Klan member, and in 1872 sponsored legislation that granted Klansmen amnesty for crimes committed as members of a secret organization, including murder; and

• Supported an amendment to the state constitution in 1877 that effectively excluded Black people from elective office.

A committee appointed by Guskiewicz reviews the commission’s work, after which he decides whether to recommend removal to the trustees.

Members of the commission have begun to ask about the renaming process for buildings whose names are removed. The University has a procedure for naming new structures but not one for renaming, so it’s not known what role the commission will have.

The names Acknowledgement Hall, to recognize Indigenous people, and Unsung Founders Hall — which is the name of a monument on campus dedicated to enslaved people and others who built the University from its beginnings — were mentioned in the discussion.

The commission is likely to take a lead role in developing education programs related to reckoning. Larry Chavis, an associate professor in Kenan-Flagler Business School and director of UNC’s American Indian Center, said in reference to the hypothetical new names, “Then when the tour goes by you’ve got to explain.”

Patricia Parker, chair of the communications department and co-chair with Leloudis of the commission, said: “I can’t wait ’til we get a process for renaming. Those are wonderful ideas.”

Graham Watkins, an undergraduate student member, said teaching students about UNC’s history could be based in residence halls. Graduate student Danita Horton, who has a degree from N.C. Central; and Danita Mason-Hogans, a Chapel Hill community member who works at Duke University and is an N.C. A&T alumna, both said they took required courses on the history of their schools.

The commission now has dossiers on two more namesakes of residence halls. Cameron Morrison supported Gov. Charles B. Aycock (class of 1880) and the white supremacy campaign of 1898. In 1920, Morrison became governor and was key supporter of the University’s building boom in that decade. He also had a turnaround, crusading against lynching and helping organize the state’s Commission on Interracial Cooperation while governor.

Bryan Grimes, who attended the University in the 1880s, was a Klansman and managed a farm in Pitt County for William Saunders (class of 1854), a known Klan leader, shortly after the Civil War, according to Leloudis. The two likely worked together on Klan organizing, said Leloudis, who added that the University has erroneously referred to Grimes’ son, J. Bryan Grimes ’28, as the namesake of the building.

In addition, the commission has received two removal requests from faculty members.

In July, the chairs of the departments of history, political science and sociology and of the curriculum in peace, war and defense asked the commission to recommend removing the name of J.G. de Roulhac Hamilton from the building where their departments are based. Hamilton’s name is on lists of white supremacist namesakes — his research focused on Reconstruction and praised the role of the Ku Klux Klan. The department chairs suggest the building be renamed for civil rights activist Pauli Murray.

The other is the celebrated Kemp Plummer Battle (class of 1849), UNC president from 1876 to 1891 and author of the definitive history of the University from its beginnings to 1912. His name was recommended by faculty in the department of African, African American and diaspora studies. Battle and his family were slave owners. Asked whether he thought Battle could be held to a more strict examination than others who were enslavers because he was UNC’s leader, Leloudis said that might be reasonable to expect.

Ruffin’s father’s name was taken off the dorm last summer after the trustees also ordered the names of Aycock, Julian Carr (class of 1866) and Josephus Daniels (class of 1885) taken off three other buildings. All were involved in white supremacist activities.

Only one building has been renamed in the reckoning process. The trustees voted in 2015 to remove Saunders’ name from a classroom building and renamed it Carolina Hall. The Aycock and Ruffin dorms are called Residence Hall One and Two for the time being, and the Carr and Daniels buildings temporarily are called by their functions, the Student Affairs and Student Stores buildings.