The University has issued an open call for suggestions of new names for three campus... 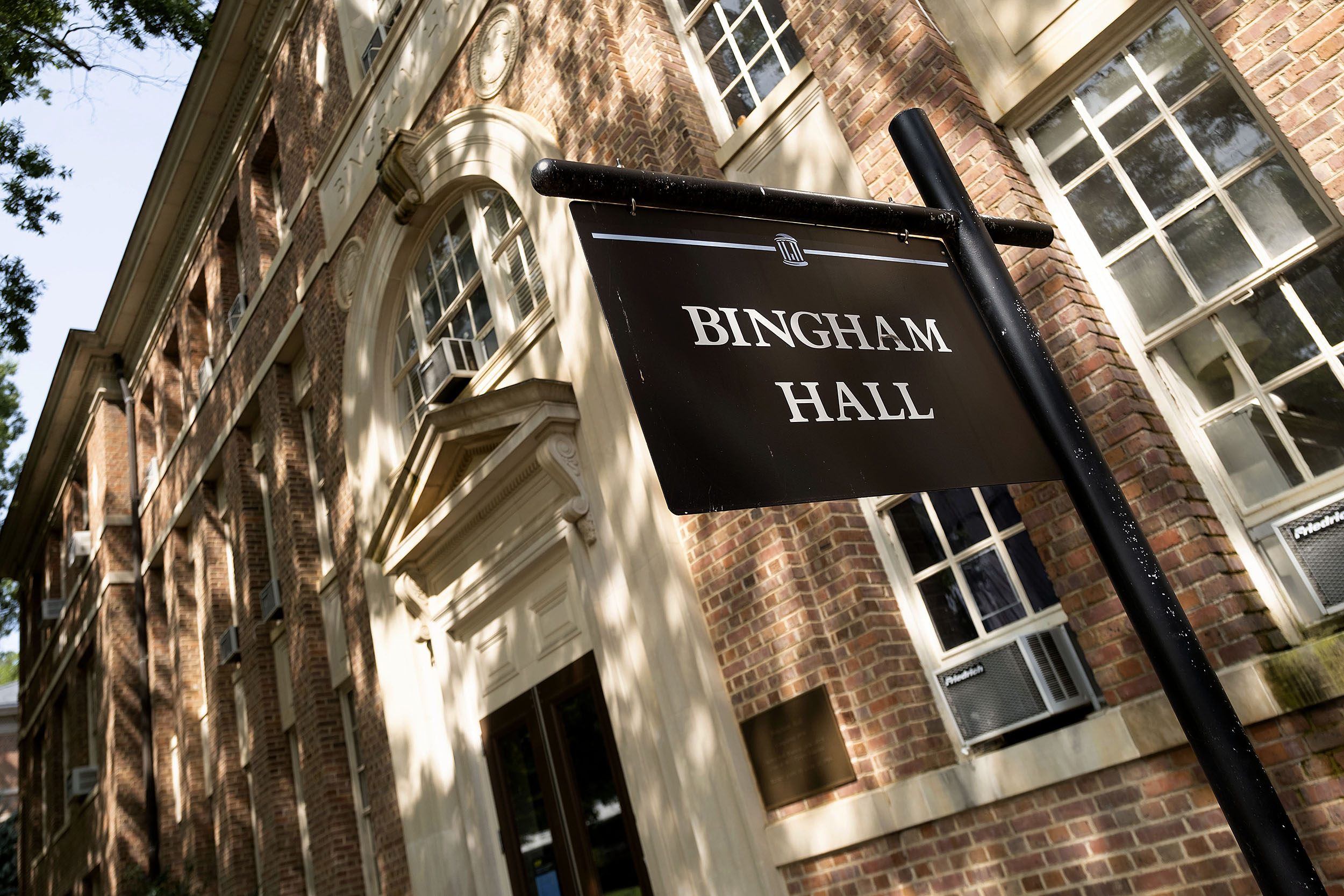 Members of the family of Robert Hall Bingham (class of 1857) have endorsed the removal of his name from the classroom building on Polk Place. (UNC/Jon Gardiner ’98)

The names of nine men — each of whom are associated with white supremacist beliefs and actions — have been recommended for removal from UNC buildings by the chancellor’s Commission on History, Race and a Way Forward.

These nine are in addition to four other individuals whose names were removed from campus buildings last year.

The nine and the buildings named for them are:

• J.G. de Roulhac Hamilton, Hamilton Hall, home to the history, political science and sociology departments and the curriculum in peace, war and defense;

Chancellor Kevin Guskiewicz has had dossiers on Bingham, Graham and Ruffin since last fall. The commission forwarded the other six names in mid-April.

“They occupied positions of power and influence. They led other men to war, condoned the use of violence to affect the outcome of elections, held high offices of public trust, enacted laws, defined the terms of debate over race and democracy, and insinuated their beliefs into education of the young,” the commission members wrote to Guskiewicz on April 14.

“They did all of these things in the name of what they themselves called ‘white supremacy.’ ”

The commission last summer unanimously recommended that the names Aycock, Carr, Daniels and Ruffin be removed for the same reasons that it noted in the current letter. When the trustees voted 11-2 in July 2020 to remove the names, they spared Thomas Ruffin Jr., who shared that building’s name along with his father, pending more research. In September, the commission said Ruffin Jr.’s actions also justified removal.

Another committee, formed in December, has been studying potential new names for the buildings for the former Aycock Residence Hall, named for Charles B. Aycock (class of 1880); Carr Building, named for Julian S. Carr (class of 1866); and Daniels Student Stores, named for Josephus Daniels (class of 1885). (Ruffin dorm was renamed temporarily for Thomas Ruffin Jr.)

In March, the University issued an open call for suggestions from the public for renaming buildings.

“The fact that a set of ideas and actions was once ‘conventional’ does not absolve past actors from the responsibility noted above,” the letter continued. “The enslavement of Black children, women, and men was both legal and widely practiced in the American South before 1865; it was also commonly denounced, most immediately by the four million souls held in bondage — who, through countless forms of resistance, demanded freedom and that their humanity be recognized.

“Enslavers had opportunities at every turn to reform their thinking and their behavior. Their refusal to do so was a moral choice for which there is no easy absolution.

“Much the same can be argued for the regime of Jim Crow. The men who are profiled in the dossiers made an active choice to enrich and empower themselves, along with others of their ilk, by terrorizing, exploiting, disenfranchising, and impoverishing their fellow citizens on the basis of color.”

Battle was president of the University from 1879 to 1891. (Battle, Vance and Pettigrew, built in 1912 and joined to look like a single building, once were residence halls.)

Members of Bingham’s family have endorsed removal of his name.

The chairs of the departments housed in Hamilton Hall have asked that his name be removed.

In March, the Asheville City Council voted to remove a 75-foot-tall monument to Vance from a square in the city’s center.

Only one building has been renamed in the reckoning process. The trustees voted in 2015 to remove the name William Saunders (class of 1854) from a classroom building and renamed it Carolina Hall. For the time being, Aycock dorm is called Residence Hall One, and the Carr and Daniels buildings temporarily are called by their functions, the Student Affairs and Student Stores buildings.

• May 2015: After a long campaign by students, faculty and others, the trustees vote 10-3 to remove the name of William Saunders (class of 1854) from a classroom building and on the same day approve a 16-year moratorium on further renaming of buildings.

• January 2020: The Commission on History, Race and a Way Forward is convened by Chancellor Kevin Guskiewicz.

• September 2020: The commission recommends removing the names of Thomas Ruffin Jr. (class of 1844) and Robert Hall Bingham (class of 1857).